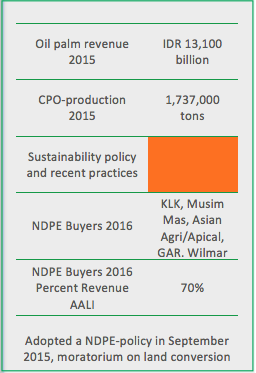 Astra Agro Lestari (Astra) is the second largest publicly traded palm oil company in Indonesia in terms of CPO production. The company is majority-owned by Jardine Matheson Holdings, which is controlled by the Scottish Keswick family. As of December 2015, Astra managed 298,000 ha of oil palm plantations with concessions scattered over Kalimantan, Sumatra and Sulawesi.

Since 2014, Astra has been active in downstream palm oil refining. In 2015, its refinery business generated 41% of its revenue. Together with the Malaysian oil palm giant Kuala Lumpur Kepong (KLK), it has formed a marketing joint venture for palm oil products from West Sulawesi. In January 2015, Astra bought a 50% stake in the refinery company PT Kreasijaya Adhikarya, located in Dumai, Riau province. KLK is the joint venture partner.

In June 2015, Climate Advisers ran the She’s Not a Fan campaign engaging Astra for its deforestation-linked palm oil. As a result, Astra introduced a moratorium on land conversion across all its operations in Indonesia. In September 2015, it published a NDPE policy. Astra is not a member of the RSPO.

As shown below in Figure 2, spatial analysis has showed that, between June 2015 and mid-August 2016, Astra cleared no peatlands and there has been no deforestation for plantation development inside Astra’s concessions.

However, since the publication of its NDPE policy, Astra has not made visible progress with its policy goals on supply chain transparency and suppliers’ compliance. Astra‘s supply chain mainly comprises smallholders. Yet, it does also source from large companies such as PT Austindo Nusantara Jaya (ANJT:IJ) to fill its refineries.

Astra’s supply chain has social conflict. In September 2016, the Indonesian NGO KKI WARSI stated: “The indigenous Orang Rimba people in Jambi are suffering as a result of Astra’s palm oil plantations. Because Astra expropriated their lands, they live in extreme poverty and despair. We urge Astra to return land to the 400 Orang Rimba within Astra’s plantation so they can live a decent life.”

Figure 2: During Indonesia’s 2015 haze disaster, about 2,400 ha of forests were lost due to fires inside Astra’s largely undeveloped peatland concession of PT Cakung Permata Nusa in Tabalong district, South Kalimantan. The red dots are recorded hotspots. No evidence was found on any intentional burnings by Astra. 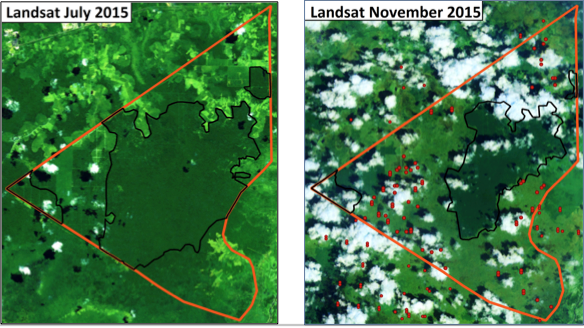