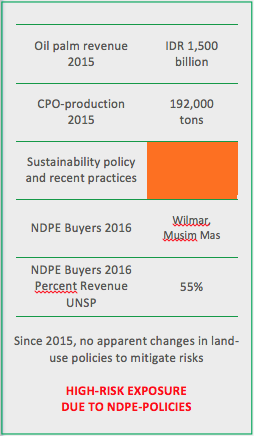 UNSP is part of the Bakrie Group, whose business interests span oil and gas, mining, agribusiness, telecommunications, metals and infrastructure. As of Q3 2016, the public held 75 percent of the UNSP’s shares. UNSP’s business covers oil palm plantations, rubber plantations and oleochemical lines of business. In October 2016, UNSP announced a reverse stock split, likely at a 10-to-1 ratio. The director in charge of finance spoke of “the first step in our financial restructuring to reduce the company’s financial burden.” The company has been losing money since 2012.

UNSP is a member of the RSPO. As of mid-2016, two of its five palm oil mills were RSPO certified. The company aims to have a third mill certified soon, as the assessment started in June 2015. UNSP has stated that it aims to achieve 100 percent RSPO-certification for its own operations by 2016, which does not seem feasible. However, it is likely that this target will be met before 2020. The company has never submitted any New Planting proposals to the RSPO and the public, yet likely it did not start clearing and planting oil palm in new concessions.

The company has not expanded its planted area in 2015 and 2016. There have been no recent practices of deforestation and the opening of peatlands.