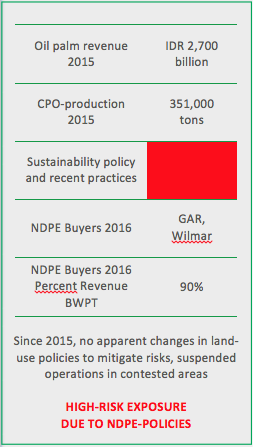 BWPT is majority-owned by business tycoon Peter Sondakh. The palm oil company emerged late 2014, after a reverse-takeover by the company Green Eagle of the already-listed PT BW Plantation (BWPT).

BWPT does not have a public NDPE policy. Before the reverse takeover, the company Green Eagle stated that its policy for the future was to focus on planting on mineral soils. BWPT had not made any such statements.

As shown below in Figure 5, significant concerns include: