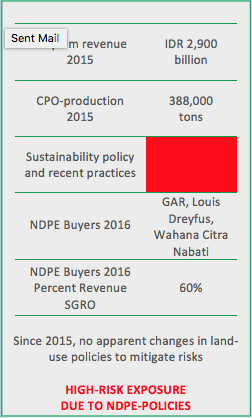 SGRO does not have a NDPE policy. It claims to preserve High Conservation Value areas, yet the company does not make the amount of ha preserved public.

SGRO is a member of the RSPO. So far only 5,000 ha of the company’s planted area have been RSPO certified. SGRO has never submitted a New Planting proposal to the RSPO. The company expects to achieve 100 percent RSPO certification for its own operations by 2021.

On 11 August 2016 judges of the South Jakarta District Court ordered SGRO to pay $80 million (IDR 1.07 trillion) for compensation and environmental restoration. The Indonesian Ministry of Environment and Forestry had started a civil lawsuit against SGRO’s subsidiary PT National Sago Prima because of forest fires on 3,000 ha in Riau province it was responsible for. According the ministry, PT National Sago Prima did not do anything to prevent wildfires. It had not built fire lookout towers and had no fire fighting teams available. In February and March 2014, fires spread in and outside its sago concession. In 2014, there were 883 hotspots recorded inside the concession. As shown in Figure 4 below, June 2014 hotspots are visible via satellites.