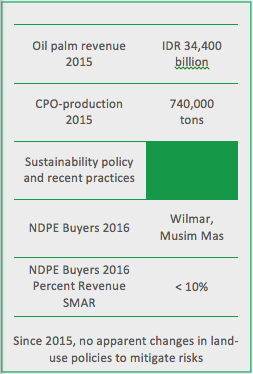 SMAR is part of the Singapore-based Golden Agri-Resources (GAR). GAR is the largest publicly traded palm oil company in Indonesia in terms of CPO production. It trades on the Singapore Stock Exchange. GAR has 483,000 ha planted with oil palm – including plasma smallholder estates – in Indonesia. SMAR manages 139,000 ha of these plantations.

GAR is majority owned by the Widjaya family, the fourth richest Indonesian family according to Forbes. GAR owns 97 percent of SMAR.

SMAR generates its revenue mainly from downstream activities. Its reﬁneries have a total capacity of 2.9 million tons of CPO per year. In addition to bulk and industrial oil, SMAR is active on the consumer market under the brands Filma and Kunci Mas.

As a subsidiary of GAR, SMAR is subject to GAR’s NDPE policy.

SMAR is a member of the RSPO. GAR and SMAR expect to achieve 100 percent RSPO certification for own operations by 2020. GAR has submitted several New Planting proposals to RSPO. By Q4 2015, 75 percent of its CPO production was RSPO certified.

But directors of SMAR and GAR own oil palm concessions in Kapuas Hulu district in West Kalimantan that lack NDPE policies.

Groups of the semi-nomadic Orang Rimba, an Indigenous People from Jambi, live inside the concession of GAR’s plantation companies PT Bahana Karya Semesta (PT BKS) and PT Kresna Duta Agroindo (PT KDA). Both companies are located in Sarolangung, Jambi province, Sumatra. The customs and culture of the Orang Rimba are closely connected to the forest, upon which they traditionally base their livelihood. Many Orang Rimba groups have lost their customary land due to oil palm plantations and transmigration programs. In June 2016, security personnel of PT BKS injured two Orang Rimba and burnt their settlement. GAR later gave a statement regretting the incident that was in contrast to the company’s social policy. The company compensated the Orang Rimba for their losses.