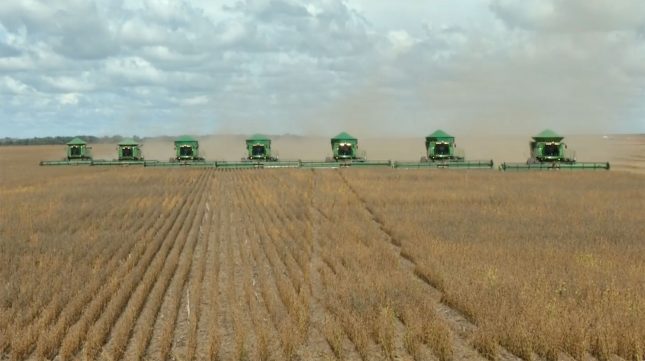 The Cerrado biome, covering over 20 percent of Brazil’s terrain, is a savannah region with high biodiversity and an important function for the water systems in Brazil. The region has experienced significant soy expansion during the last two decades. Soy expansion has been most prevalent in Matopiba, consisting of the states of Maranhão, Tocantins, Piauí and Bahia. This paper analyses the impacts of the soy sector on deforestation and water availability, and how water issues in turn can impact soy production. It investigates how the water impacts within the region may translate into business risks for soy companies operating in the Cerrado.

The Cerrado is the second largest biome in Brazil, covering more than 20 percent of Brazil’s terrain. It consists of wooded savannah with long root structures. The Cerrado native vegetation and root structure play a key function in Brazil’s water systems.

Figure 1: Illustration of different steps in the water cycle of Brazil: evapotranspiration in the Cerrado (2) influences rainfall in the Amazon (3). 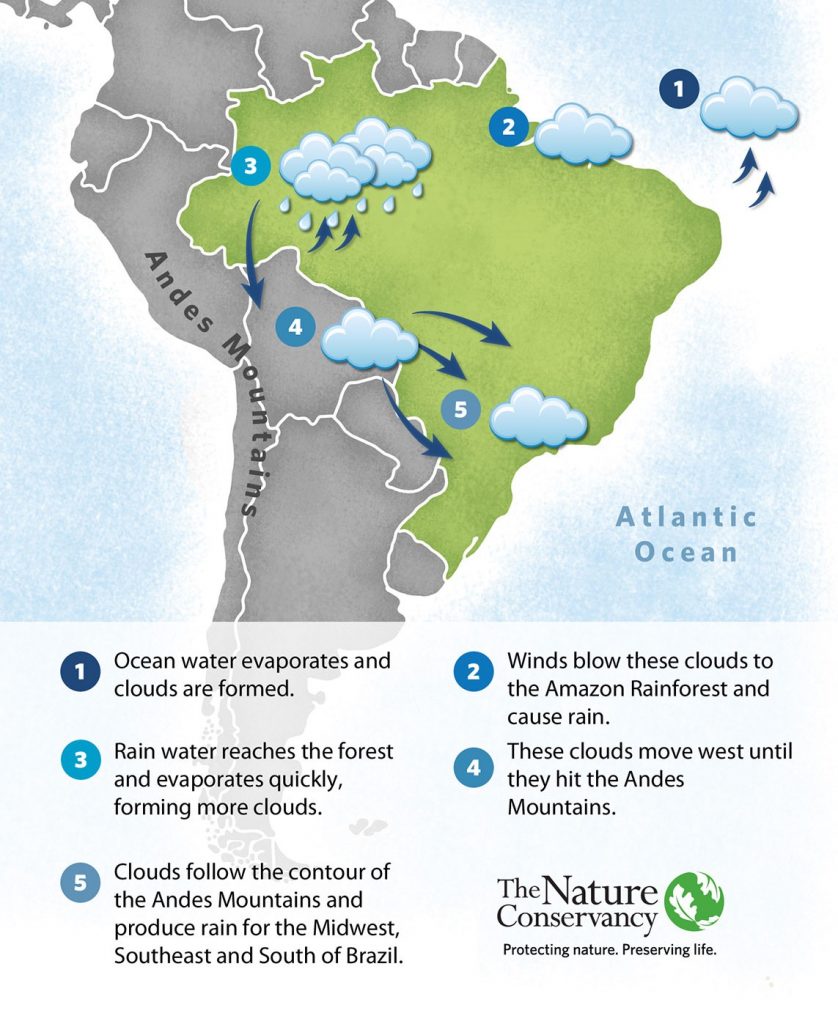 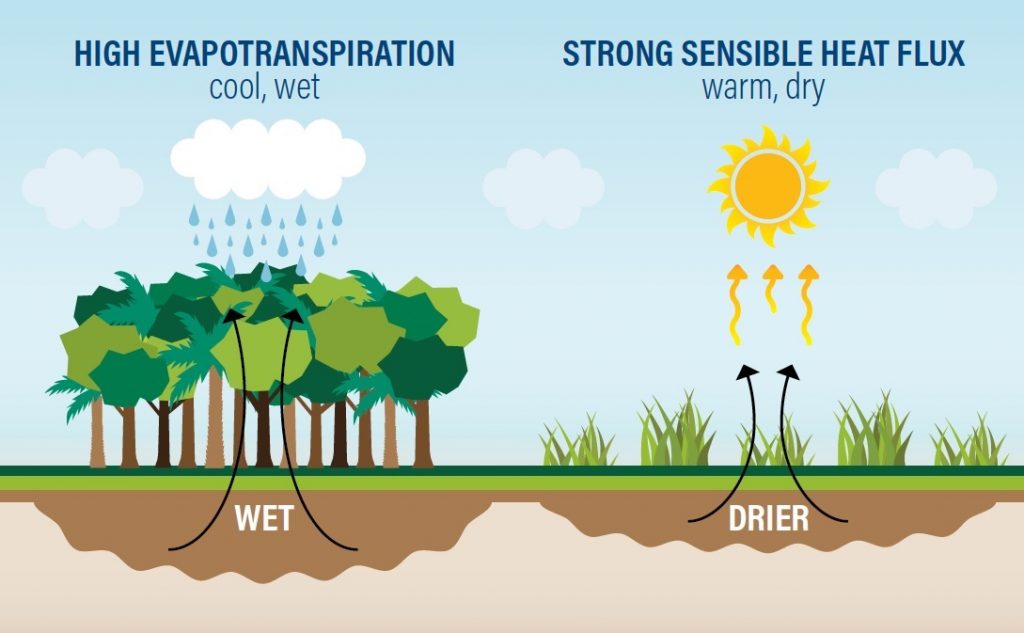 Soy Expansion in the Cerrado Has Replaced Native Vegetation 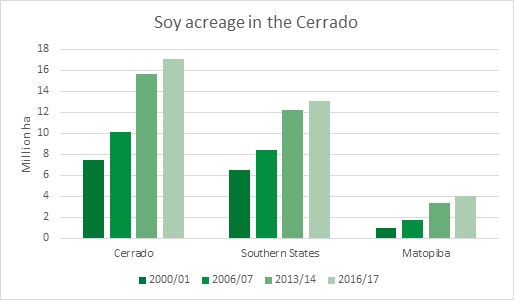 The expansion of soy has come at the expense of the native vegetation in the Cerrado. Of the 9.54 million ha total expansion between 2000/01 and 2016/17, 30 percent (2.83 million ha) occurred in deforested areas. This percentage is significantly higher in Matopiba, where 65 percent of soy expansion (1.9 million ha) replaced native vegetation. Average deforestation rates reached their highest levels at the beginning of the century, but they dropped significantly in recent years. However, in 2017, deforestation rates rose by 9 percent compared to 2016, which could indicate a new trend. 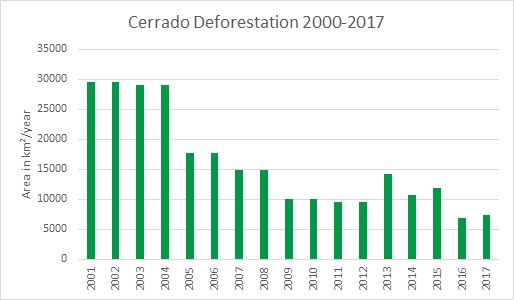 The relationship between soy production, deforestation and water is becoming a major concern in this region. The northeastern region of Brazil has experienced an exceptional large number of consecutive years of droughts. The removal of native Cerrado vegetation has led to changes in hydrological behaviours in the Cerrado and in other regions in Brazil:

The deforestation-related impact on water for soy cultivation is combined with effects of climate change in the Cerrado. Among these effects are dryer conditions, especially during the planting of soybeans, which are planted early to enable two harvests in one season. Climate modelling shows that deforestation in the Cerrado increases the climatic variability.

Changes in rainfall patterns in the Cerrado

A University of Brasilia study linked deforestation to an 8.4 percent drop in yearly rainfall in the Cerrado over the last three decades. The conversion of Cerrado into open grasslands (or planted crops) has reduced precipitation by approximately 10 percent. The effects have also caused an increase in the frequency of dry periods within the wet season and a rise in mean surface air temperature by 0.5°C.

As noted, deforestation risks changing the onset of the wet season or altering the duration of the dry season. A deforestation scenario for the Southern and Eastern Amazonia region, shows that deforestation in the Amazon and Cerrado combined will reduce rainfall and prolong the dry season from five to six months, affecting agricultural production.

Converting native vegetation to agricultural land substantially modifies the amount of water in both small and large Cerrado rivers. The rates of surface runoff and evapotranspiration affect the seasonality of water flow in rivers and groundwater. When the native vegetation is removed, runoff accelerates rather than water infiltrating and feeding springs or aquifers or being absorbed by roots.

Other important consequences of clearing Cerrado vegetation include an increased chance of flooding, eroded fields and valleys, and excessive sedimentation during the rainy season (October-April). Infiltration rates are considerably lower at pasture and cropland sites compared to native vegetation. The Nature Conservancy (TNC) analysed rainfall trends in the region over the last 30 years and found increasingly frequent and varied extreme rain events, along with an overall decrease in river flows. At the same time, the Araguaia River, one of the major river basins in Matopiba, saw a 25 percent discharge increase. Two-thirds of the increase is the result of deforestation, whereas climate variability can explain the remaining one-third.

TNC also illustrated consequences of land conversion and availability of ground water resources in West Bahia. Conversion of land that is important for ground water infiltration could result in a reduction of groundwater availability in the main Urucuia aquifer.

The deforestation-linked water impacts may lead to sharp decreases in productivity due to reduced precipitation patterns. As such, the meteorological impact of agricultural expansion could create operational risks for soy producers, including the listed companies SLC Agrícola and BrasilAgro. In Matopiba, local governments have supported the expansion of mechanized agriculture. The local governments, however, have not adopted climatic variability adaptation measures. Without adequately addressing these water and deforestation risks, investments in Matopiba can become a high-risk strategy.

Soy production relies on the availability of sufficient water in the soil. Most of the soy farms in Matopiba are rainfed, with only a limited area under irrigation in Bahia (16 percent of the total productive agricultural area). Rainfed Matopiba soy production is exposed to the adverse impacts of agricultural droughts. The problems occur when the soil moisture drops to levels that adversely affect the crop yield and agricultural profitability. The use of groundwater (center-pivot) irrigation systems in Matopiba is increasing to compensate for the lack of rainfall. 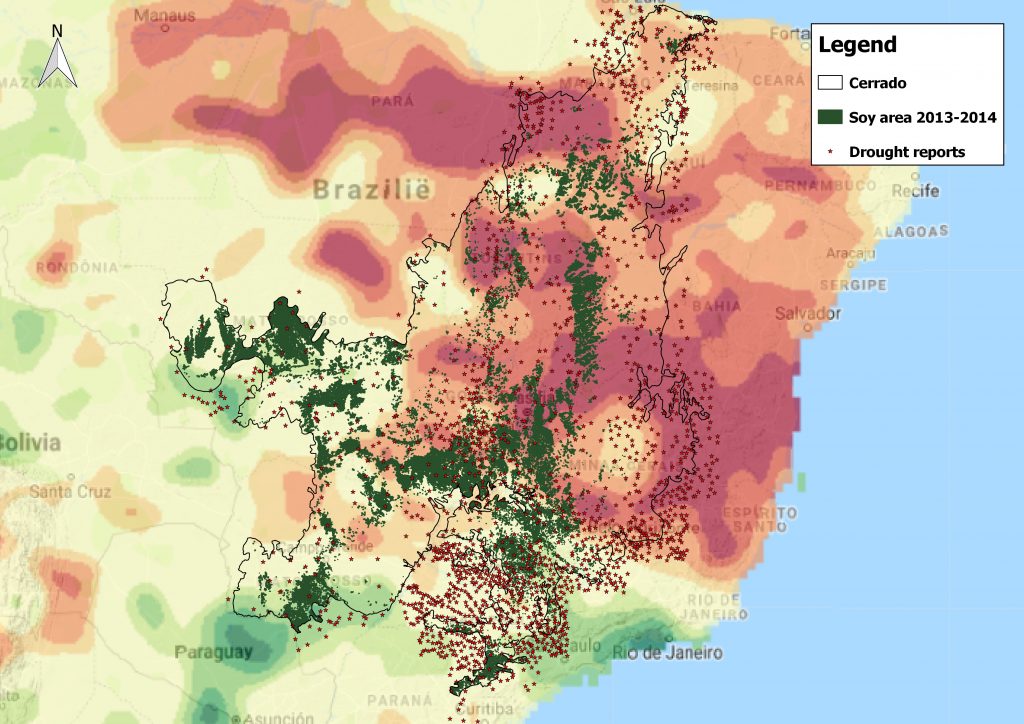 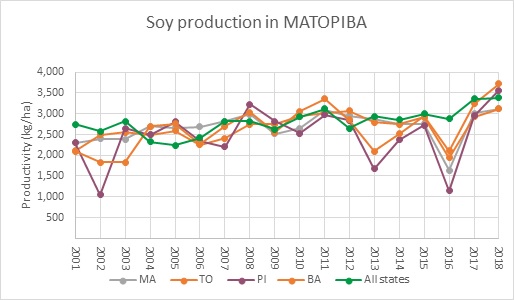 In 2016, soy productivity in the Matopiba fell by 40 percent compared to other soy producing regions of Brazil as a result of dry weather. A study by  Amazon Environmental Research Institute (IPAM) showed that in Matopiba, 55 percent of farmer respondents noted low productivity in the past eight harvests, while 52 percent of respondents pointed at climatic causes such as reduction in rainfall or rainfall starting late.

In 2013, a drought particularly affected two of Brazil’s largest farm operators involved in soy production, BrasilAgro and SLC Agricola. With the majority of their farm portfolio situated in Matopiba (75 percent and 54 percent respectively) both companies relied on favorable climatic conditions in Matopiba. In 2013, BrasilAgro had to deal with severe droughts at its Northeast farms reducing 31 percent of soy yields. At the same time, SLC saw soy production fall by 15 percent. SLC reported the drought affected the Western Bahia and Piauí farms (see annex for overview of company policies).

In 2017, after five years of drought, profits and returns for producers started to increase again. In 2017 and 2018, producers saw record yields, thanks to a combination of larger planting areas and positive growing conditions. According to the World Wildlife Fund (WWF), improved conditions for producers could accelerate the current trend of clearing of Cerrado forest in coming years.

A recent study from the Stockholm Resilience Centre, shows that ongoing deforestation in areas such as the Amazon might soon lead to an ‘tipping point’, leading to large-scale changes in the earth system. The Centre projects that parts of the Amazon will become increasingly dryer, leading to major economic impacts on agricultural production. This point is expected if temperatures rise 3-4°C, or if deforestation reaches approximately 25 percent of total land in the Amazon. To date, almost 18 percent of the Amazonian basin has been deforested. Due to increases in temperature rise, deforestation and forest fires, it could arrive earlier than expected. The economic consequences of passing this tipping point may affect institutional investors in soy producers and farmland.

Deforestation in the Cerrado impacts the climatic variability, and as a result threatens the sustainability of agricultural production in the region. With deforestation projected to reduce rainfall, especially in September and October, the increases in variable rainfall patterns delay the onset of the soy planting season. This poses a risk of productivity loss for soy crops planted.

A recent Embrapa Brazil study shows that, under certain climate change scenarios, the area of land in Brazil suitable for soy production may decrease by up to 39 percent by 2040. The results point to an increase in heat waves and extreme weather in the coming years, while also increasing the possibility of water shortages. In addition to expected increases in temperatures, hydrological cycles are altered and some areas of cultivation — now considered low climate risk – may have higher risks from climate change. This outlook may hold back new investments in agricultural businesses in Brazil. According to the rules of agricultural credit in Brazil, in order to procure a loan for a given crop, the farmer must operate in an area where the risk of crop failure is less than 20% (a loss every five years).

The World Bank expects that in the period 2020-2039 dry spells will increase up to 11 days in the September and November for Matopiba. Wide gaps between rainfall episodes could damage or destroy crops. 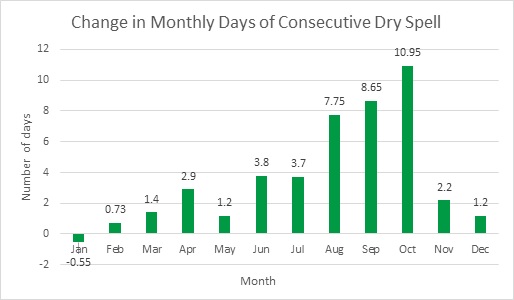 Without adaptative measures, the current production of soybean and maize may not be sustainable in Matopiba. Even the more optimistic Intergovernmental Panel on Climate Change (IPCC) scenarios for the Cerrado depict that consequences of climate change could lead to economic losses of USD 1.7 billion for the main crops in the Cerrado (including soy), as well as crop migration southwards. The possibility of losing more crops creates additional production risks in a region in which agricultural suitability of land is already limited. 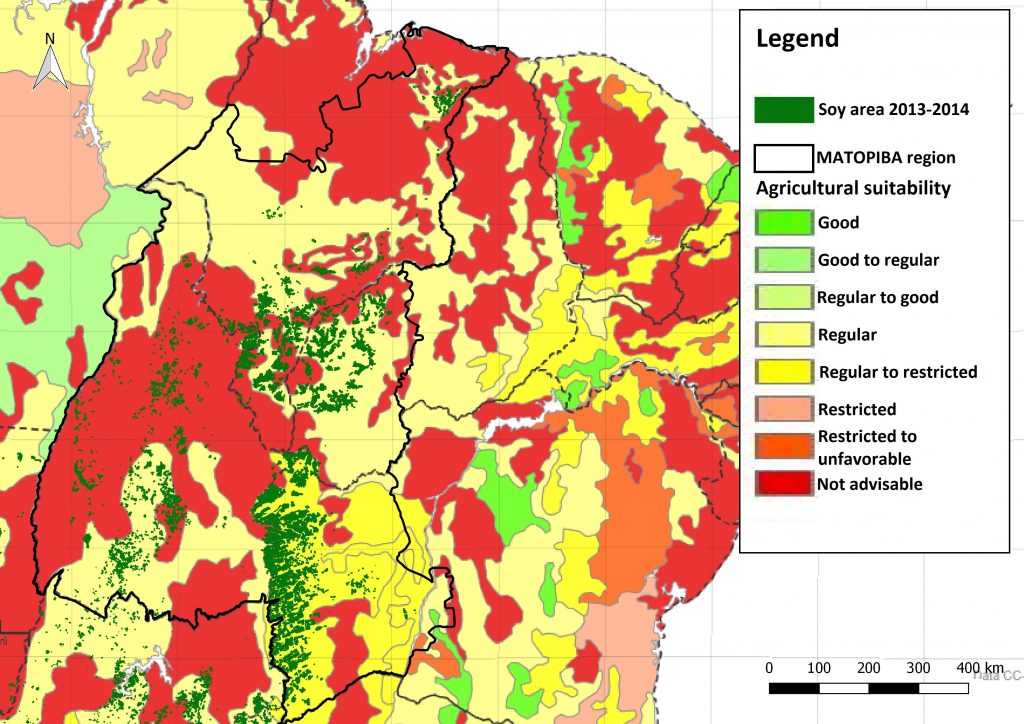 Researchers from Instituto de Manejo e Certificação Florestal e Agrícola (Imaflora) have indicated that due to the increased droughts and economic crisis, the expansion of soy production in Matopiba has stalled. The Institute for Society, Population and Nature (ISPN) in Brazil, meanwhile, has highlighted that most producers are too indebted to leave the area, and thus need to continue production even in the face of unsuitable conditions.

Next to the risk of losing productivity and thus profits in the future, the negative climatic impacts also create a risk of stranded land.  Continuation of deforestation of the Cerrado may lead to sharper decreases in agricultural productivity. Against this backdrop, even forested agricultural properties could be considered stranded. Stranded land is a form of stranded assets — land that cannot viably be developed. For companies such as BrasilAgro and SLC Agricola, both of which include the sale of rural farmland in the Matopiba as part of their business models, projections regarding unsustainability and decreased productivity in the region could affect the value of their land portfolios. Decreased value of their land would likely have negative impacts on the ability to sell their farmland in the future.

Soy companies may also face exposure to the risk of conflict, associated with the competition over water that arises with other water users, such as local communities. Pressure on water resources in the region has led to tensions between farmers and local population. A number of factors increase this competition:

Social tensions and conflicts have in some instances led to protests and sabotage of farms. In 2017, 1,000 people occupied two farms in Bahia to protest their use of water from the rivers for irrigation, leading to the lack of water in neighbouring communities. In September 2017, a fact-finding mission in the south of Piauí, organized by a number of international human-rights organizations, revealed the effects of soy farm expansion on the availability and quality of water resources. Communities in Piauí indicate that water sources have diminished over recent years. Moreover, the remaining water turns bright red in certain seasons, which communities link to the use of agrochemicals by soy producers. Conflicts are already arising over deforestation and water pollution between small-scale farmers and soy producers in this area.

Some companies, such as BrasilAgro, note that they are aware of the risks of social resistance around land and water. In one of its reports, BrasilAgro points to social movements, including Comissão Pastoral da Terra (CPT), advocating for agrarian reform. The report argues that these movements commonly encourage community members to occupy farmlands to protest agribusiness expansion and negative impacts of these businesses. BrasilAgro states: “Any invasion or occupation may materially impair the use of our lands and adversely affect our business, financial situation and results of operations.”