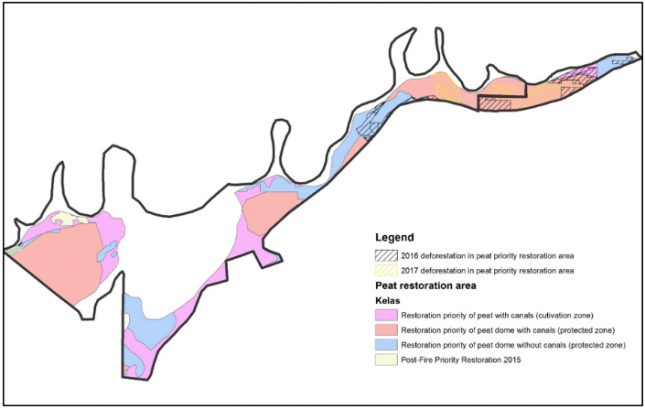 This claim is verifiably incorrect. Chain Reaction Research contacted TBLA on February 16, 2018, and shared with them a draft report for due hearing, as part of our normal process. When no response was received, another email was sent on February 26, 2018, to ensure reception of the report by TBLA. On the 28th of February 2018, Mr. Mulyono Swito, TBLA’s head of sustainability replied with a detailed response.

“As written in the disclaimer section of the report, “…the Sponsors do not guarantee the accuracy or completeness of this information … and nothing in this document shall be construed as such a guarantee….”

Chain Reaction Research has conducted a sustainability performance review of TBLA and a financial risk assessment, and informed the company and financial institutions of our findings. The company was given opportunity to comment on a draft of our assessment and Chain Reaction Research received a response in writing. Its comments were taken into account prior to publication. Our disclaimer, quoted by TBLA, is standard in any risk assessment report. We stand by our key findings and remain concerned about TBLA’s non-compliance with NDPE sourcing policies and the financial consequences that this can have, on the company, on its investors and its buyers.

TBLA owns a company named PT Bangun Nusa Indah Lampung. Our analysis concerned the company with the latter name. Our report has been updated to reflect the correct full name of the company.

“The company has never applied for a permit to convert oil palm to sugar cane plantation since the original permit under the said is already for sugar cane.”

It is understood that, at least until November 2016, the company had never applied for a conversion of the commodity to be planted as stipulated in the forestland release permits issued by the (then) Ministry of Forestry to TBLA subsidiaries PT Samora Usaha Jaya and PT Dinamika Graha Sarana. These permits issued to the companies specified that their land bank was to be developed into sugar cane plantations.

Planting a commodity other than what is stated in the permit is considered a serious breach of Indonesian regulations. Following an inspection in November 2016,  the Ministry of Environment and Forestry concluded in a public statement that PT Samora Usaha Jaya and PT Dinamika Graha Sarana had been “disobedient, undisciplined, and violated the authority and trust of the government” when oil palm was planted on land that had been released for sugar cane plantations. The inspection team observed that the larger part of PT SUJ comprised peat, that drainage canals had been constructed, that parts of the peat had burnt and that parts of the land were already planted with oil palm.

Chain Reaction Research’s position is that the land would still be contested if it had been planted with sugar cane. Whilst it is technically possible to grow sugarcane on peat, there would be continuous extreme risk of fire outbreak, especially during the initial land clearing and during every subsequent harvest.

“83% of TBLA landbank has obtained land title (HGU) and the remaining had passed the approval from ‘Panitia B.’”

The scope of Chain Reaction Research’s risk analyses is not limited to legal compliance. Our contested landbank methodology primarily references against compliance with buyers’ and investors’ sustainability (“No Deforestation, No Peat and No Exploitation”) policies. Our reasoning for considering land banks held by various TBLA subsidiaries contested is summarized in the table on pages 3 and 4 in our report.

Land titles (HGU) offer some but no final assurance that third party land claims have been addressed. It also offers no security in other sustainability terms, such as standards set by buyers and investors. New government policy and laws can also result in changes in the terms.

“ADM and Nestle are not TBLA’s clients”

“Nevertheless, this segment of industry will continue to face several challenges in 2016 that must be followed-up immediately, such as […]:

The need to revise Government Regulation No.71 year 2014 concerning the Protection and Management of Peat Land Ecosystem, as well as the need to revise Law 18/2013 concerning the Prevention and Eradication of Forest Damage. These revisions need to be conducted so that the regulations may not hinder the development of domestic palm oil industry” (2016 annual report, business outlook, page 97 and 2015 annual report, business outlook, page 91).

“CPO sales only account for 5% of the company’s revenue. Majority of the company’s oil palm product are being sold in the form of refined products such as cooking oil, margarine and biodiesel in the domestic market which get nothing to do with oil palm sourcing policies.”

In our report we have identified some of TBLA’s direct customers, five of which adhere to higher sustainability standards than TBLA. These five have adopted NDPE policies and are therefore likely to opt out of TBLA’S palm oil products because of the link to deforestation, peat or exploitation. In our report we state that “no quantitative data was found as to how much each one is purchasing.” However, based on the company’s reported accounts receivable, we made an informed assumption that, on average, each of the unrelated NDPE customers buys around 2 percent of TBLA’s revenue. Based on the identified five names and these two percent, 10 percent of the company’s revenue can be at risk. We have also clearly ended our statement with “Alternatively, it could find replacement buyers without NDPE policies standards and thus supply the shrinking leakage market.”

TBLA confirms in its statement that it is indeed servicing domestic “leakage markets”, and with this continues to create sustainability risk. However, many international (food and retail) brands operating in this market also have adopted NDPE policies. We expect that these policies will be increasingly enforced.