The company trades 10 to 15 percent of the world’s palm oil. IOI said that the policy would apply to all its third party suppliers, subsidiaries, and joint ventures in which it had management control. It also said in writing that the policy applies to the parent IOI Group (IOI:MK), which it said would not clear forests or peat.

The announcement may also make a comprehensive policy by Indonesian palm oil grower Bumitama (BAL:SP) more likely. Bumitama, which is 31% owned by IOI, has previously said that it would consider launching its own forest conservation policy by the end of 2014.

IOI’s move received praise from conservation advocates, though some cautioned that given the company’s recent history of deforestation and human rights issues, they would be closely scrutinizing implementation and governance efforts. They also called on the parent IOI Group to formally adopt the policy.

IOI’s commitment follows similar policies from fellow palm oil traders Wilmar International (~45% of global trade), Golden Agri-Resources (~10%), Cargill (~5%) and Bunge (~2%) over the past year. With palm oil buyers having many options for responsible suppliers, companies that have yet to commit to No Deforestation are likely to face significantly increased market access challenges, particularly with large consumer companies that have made responsible sourcing commitments. Major companies that have not announced No Deforestation sourcing, notably Astra Agro Lestari (AALI:IJ), Sime Darby (SIME:MK), Olam (OLAM:SP), KLK (KLK:MK), Musim Mas, and First Resources (FR:SP) are likely to come under significantly increased pressure from investors and consumers in coming months. 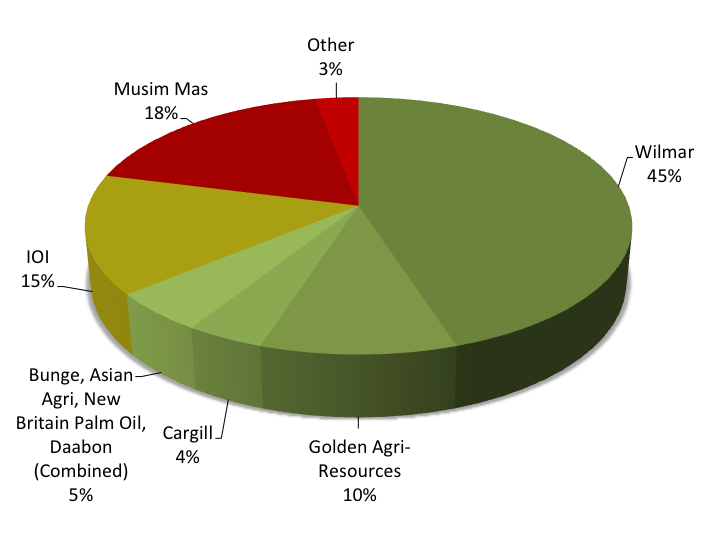 Agribusiness giant Wilmar International recently released its third implementation report for its No Deforestation, No Peat, No Exploitation commodity sourcing policy from July 1-September 30, 2014. The report was produced in conjunction with implementation partner The Forest Trust (TFT).

The report shows increased transparency relative to previous reports, including specific data on suppliers. We expect that Wilmar will provide significantly enhanced transparency in future reports. The report also outlines work Wilmar is doing around the world to implement their policy, including deploying an HCS field assessment in their Nigerian and Ugandan operations, establishment of traceability for their Adani Wilmar JV in India, as well as their Bangladesh Edible Oil, engagement with supplies in Latin America, and training by the International Organization for Migration.

The report details Wilmar’s work to respond to specific issues raised by stakeholders, as well as updates on their work on a variety of social and community rights issues. However, Wilmar has not yet fully reported on how it is implementing its No Deforestation policy for other commodities in at risk areas, such as sugar in Myanmar and elsewhere, and soy in Latin America.

Musim Mas under fire for connection to deforestation in Leuser Ecosystem

Conservation of the Leuser has for many years been a cause-célèbre for NGOs and governments both because of its unusual biodiversity – it’s the last place where orangutans, tigers, rhinos, elephants, and sun bears can all be found in the same place – and because of the prevalence of “deep carbon” peat forests across the Leuser’s 6.5 million acres.

Although Musim Mas itself does not have plantations in the Leuser Ecosystem, RAN says its PT. Nusantara Mas Refinery at Port of Belawan is at high risk for exposure to the growers named in report for deforestation. The report also says that Wilmar International (WIL:SP) and Golden Agri-Resources (GGR:SP) are at risk for sourcing palm oil from the controversial region, but notes that if fully applied, their policies should exclude suppliers engaged in deforestation.

This is the second time Musim Mas has come under fire from a major international NGO for links to deforestation. Greenpeace also recently issued a report that tied the company to deforestation and clearance of endangered orangutan and gibbon habitat in Riau, Kalimantan, and plans for large-scale primary forest clearance in Papua.

We anticipate that customer and civil society pressure on Musim Mas is likely to rise given their lack of a forest conservation policy. The company has been playing with the idea of adopting a No Deforestation policy more than a year, but has continued to rely on RSPO certification even as its competitors have embraced stronger standards.

A new report from the Carbon Disclosure Project (CDP) shows that many of the world’s largest companies are recognizing the business case for disclosing and addressing deforestation risks within their commodity supply chains. The study surveys 162 companies that have a combined marked capitalization of $3.2 trillion and shows that “nearly 90% of businesses identify opportunities with the sustainable sourcing of at least one forest-risk commodity.”