The Chain: Most global palm oil trade covered by zero-deforestation

EDITOR’S NOTE 22 March 2016: Since this edition of The Chain was published, Chain Reaction Research and other analysts revised their numbers due to newly identified methodological issues. The 96% figure was always a best guess estimate derived from publicly available figures combined with private industry communication of proprietary data. However, among key issues that were identified is that that calculation only covered products traded on the global market and did not include domestic transactions; and it did not effectively account for double-counting product traded between the major brokers. With those caveats in mind, we now estimate a conservative figure of 60% (though it might indeed be much higher). Most importantly, 24 months ago that figure was under 5 percent. Either way, the sector has undergone a radical transformation.

Chain Reaction Research regrets the need to change the calculation, but will continue our commitment to transparency in our analysis, and we are providing this Editor’s Note by way of explanation. The original blog post is included below in an unedited form.

The last major holdout in the palm oil industry has joined the rapidly growing movement to protect the world’s rainforests. On Thursday, Singapore-based Musim Mas, which controls approximately 18% of the global palm oil trade, announced its commitment to a No Deforestation, No Peatland, No Exploitation policy — effective immediately — for its global supply chain and partners.

According to the company, all palm oil sourced will be traceable to the mill level by the end of 2015, and to the plantation level by the end of 2016. Musim Mas has also become a member of The Forest Trust to ensure successful and transparent implementation of the policy. The move follows exposés by Rainforest Action Network and Greenpeace that connected Musim Mas to deforestation.

Musim Mas joins Wilmar International, Golden-Agri Resources, Cargill, Bunge and IOI, among others, which have all adopted No Deforestation sourcing policies – and together represent an estimated 96% of global palm oil trade (see attached chart). It’s an extraordinary turnaround for the industry: December 5 marked the one-year anniversary of Wilmar’s announcement of its landmark No-Deforestation policy. Before Wilmar’s commitment last year, less than 5% of the global palm oil trade was committed to zero-deforestation principles.

The Musim Mas announcement creates significant market access risk for companies like Astra Agro Lestari, Olam, Sime Darby, First Resources, KLK, and others that have yet to adopt strong No Deforestation sourcing policies. They may have trouble selling to the major traders as well as direct end-user customers that now have major options for No Deforestation supply. The change may also increase pressure on IOI Group to formally adopt a No Deforestation policy and publicize a credible implementation plan. Although IOI Group CEO Lee Yeow Chor has said in writing that IOI Group endorses the new policy, it was only officially issued in the name of IOI Loders Croklaan. 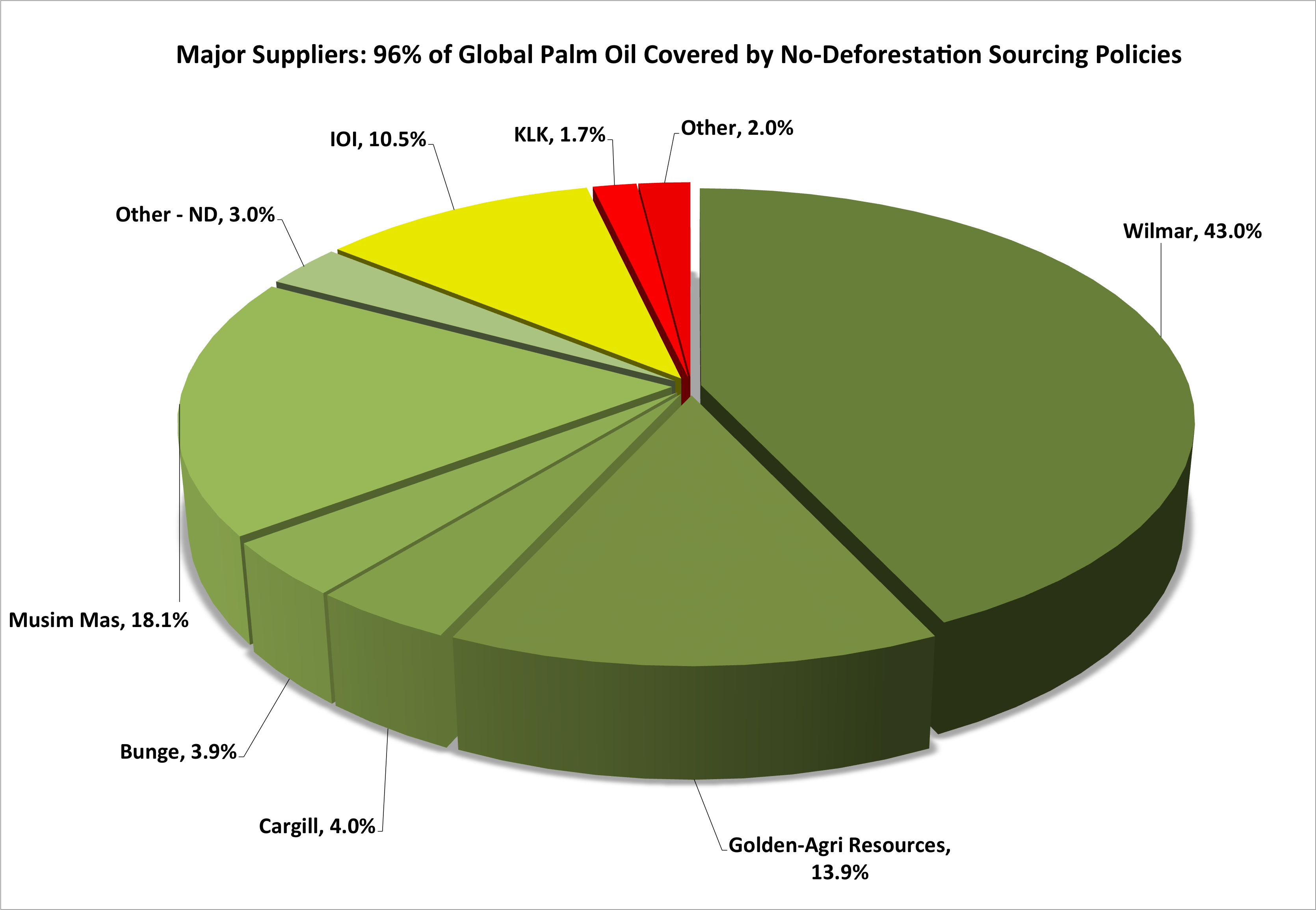 The chart above shows the share of palm oil traded on international markets that is now bound by zero-deforestation commitments, based on 2013 global consumption figures of 57 million metric tons, reflecting globally traded volume. Total global production volume is estimated at 63 million tons, suggesting zero-deforestation commitments now cover 87% of palm oil production. Company data may include some overlap due to inter-company trading.​

Jokowi cracks down on logging and peatland development

Indonesia’s new president, Joko Widodo, has sent a number of signals that he will take action to curb forest and peatland clearing related to commodity expansion. A trained forester, Jokowi traveled last week to Sumatra to personally survey illegal logging in the region. Speaking to national reporters, the president vowed to address Indonesia’s growing deforestation rate, which has become the highest in the world: “It must be stopped; we mustn’t allow our tropical rainforest to disappear because of monoculture plantations like oil palm,” said Jokowi. The president also joined community members in personally damming a peatland drainage canal, and declared: “it’s not only deep peat that must be protected, but all peat areas.”

In addition to this show of support, Jokowi is taking political action to protect forests and peatland. After newly appointed Environment and Forestry Minister Siti Nurbaya Bakar imposed a 4-6 month moratorium on new logging permits, Jokowi has ordered the Ministry to audit any licenses for palm oil companies that have converted peatlands.

Brazil appears to be back on the conservation track

The Brazilian soy industry announced last week that they would renew the Amazon Soy Moratorium, a transformationally successful forest protection measure. The Moratorium was set to expire at the end of 2014, but will continue at least through May 2016.

The Soy Moratorium is a voluntary corporate commitment by the Brazilian Vegetable Oil Association and the Brazilian Grain Exporters Association to prohibit any soy cultivation that drives forest clearing in the Amazon. Since its inception in 2006, the Moratorium has been one of the most successful private sector initiatives to protect forests in the tropics. Although the renewal should help ensure continued low rates of Amazon deforestation, there is increasing attention to deforestation for soy outside the Brazilian Amazon in areas such as Brazil’s cerrado savannah, the Peruvian and Bolivian Amazon, Paraguay’s Gran Chaco, and Colombia.

Following the Moratorium renewal, Brazilian officials announced that Amazon deforestation had dropped 18 percent between August 2013 and July 2014, making it the second-lowest level since annual records began in 1988. The official numbers were widely anticipated after deforestation in Brazil’s Amazon spiked by 28 percent over the previous year. Looking over a longer timeframe, deforestation in Brazil’s Amazon has continued its steady downward trend over the past decade, due in large part to industry efforts like the Soy Moratorium. The current rate of deforestation in the region (4,848 km2/year) is now 75% below its baseline average (19,500 km2/year) from 1996-2005.

Malaysian palm oil trader Kuala Lumpur Kepong (KLK:MK) announced on Tuesday a policy described as a commitment to protect forests, peatlands, and labor rights. KLK is clearly attempting to align itself with industry competitors that have adopted zero-deforestation palm oil supply chain commitments. However, the policy falls well short of the bar set by Wilmar, GAR, Cargill and others. KLK’s policy does not apply to the company’s suppliers, trading partners, or join ventures, and it also does not commit to applying the High Carbon Stock approach to evaluate conservation areas. The move has been widely criticized by civil society groups, who continue to pressure the company to end its current practices.

KLK has a land bank of approximately 250,000 ha in Malaysia and Indonesia. A forthcoming Chain Reaction Research report will analyze financially relevant sustainability risks associated with the company.