The Chain: Santander Bank breaks with paper giant over deforestation

Santander Bank (SAN:SM) announced last week that it will no longer provide financing to the Singapore-based Asia Pacific Resources International Limited (ARHAF:US) in response to evidence that the pulp and paper company has continued to clear forests, in spite of a sustainability pledge made last year. In January 2014, APRIL released a forest conservation policy that was roundly criticized by civil society groups that said the commitment fell short of industry leader Asia Pulp & Paper’s policy from February 2013. Over the past year, several investigations have documented clear photographic evidence of APRIL and its subsidiaries bulldozing forests and draining peatlands in Indonesia.

In response to APRIL’s lack of progress, Greenpeace targeted Santander as one of APRIL’s largest financiers – in 2012, Santander helped broker a $600 million loan to APRIL. Just days after Greenpeace UK released a video of APRIL’s clearing operations in Indonesia, Santander announced that it “has decided to not renew the current funding to APRIL and will not be extending further funding at this stage; any future loans will be conditional on APRIL implementing new sustainability measures which address its involvement with deforestation.”

An analysis by BankTrack shows that Santander is one of two dozen banks financing APRIL, and was only the company’s fourth largest funder between 2011-2014 – the top three are all Chinese firms: Chinese Development Bank, Bank of China, and CITIC. The other top financiers of APRIL are detailed in the chart below, courtesy of BankTrack: 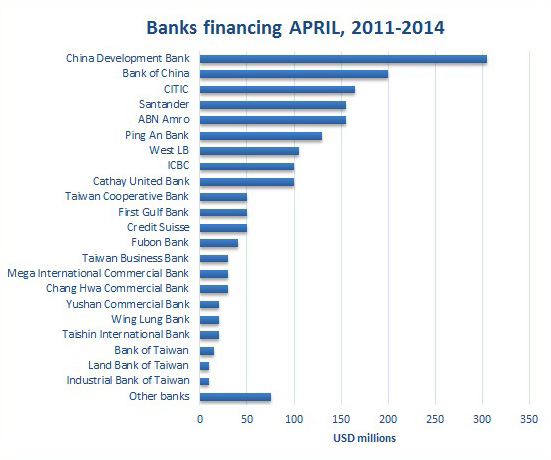 The Indonesian government is working to approve a measure that would increase the national subsidy for biofuels to 4,000 rupiah ($0.32) per liter, a nearly three-fold increase over last year’s level of 1,500 rupiah per liter. After the country cut fossil fuel subsidies last year in response to dropping oil prices, many had hoped that the government under new president Jokowi would allocate the savings for domestic programs like education and health care. Instead, the move seems intended to protect Indonesia’s domestic palm oil industry after prices plunged almost 10% over the past year. As a result, the share of biofuels used in the country’s standard fuel mix is expected to eventually rise from less than 10% now to around 20%. While news of the subsidy was welcomed by industry, which quickly saw a large spike in palm oil futures, the move angered forest advocates that say it will exacerbate Indonesia’s deforestation rate, which is already the highest in the world.

Last week, the European Parliament’s Environment Committee voted to limit the use of first-generation biofuels such as palm oil and rapeseed oil in the EU’s fuel supply to 6% by 2020. Energy crops were also included under the 6% cap because they also require land, creating competition with food crops. The committee also voted to factor in indirect land-use change (ILUC) emissions from biofuels, caused when diversion of land from food production to bioenergy increases demand for land elsewhere, driving land clearance and deforestation. The vote sets the stage for negotiations between the Parliament and European Council. The move is expected to reduce global investment in biofuels projects.

Last week, the hardwood flooring retailer Lumber Liquidators (LL:US) revealed that it is facing potential criminal charges under the Lacey Act, a US conservation law that forbids trade of wildlife or forest products that have been illegally harvested. In 2013, federal agencies searched Lumber Liquidators’ corporate offices seeking information about the company’s importation of its flooring products. Over the past year, the company’s stock has lost nearly half of its value. On Wednesday, Lumber Liquidator’s stock had closed down more than 12%, its third double-digit drop in the past week.

Singapore-based Musim Mas recently announced that it has begun to map out its first-tier supply chain, focusing on its suppliers who provide the crude palm oil (CPO) and palm kernel (PK) for its 10 refineries in Indonesia, which account for the majority of its refining capacity. Musim Mas has also posted a list online of 445 mills and 333 companies that supply CPO and/or PK to the company. In December 2014 Musim Mas, which controls approximately 18% of the global palm oil trade, announced to a No Deforestation, No Peat, No Exploitation policy, becoming one of the last major traders in the industry to join this standard. The company sources approximately 90% of its downstream business from external suppliers, so revealing its suppliers is an important first step toward implementation and transparency. Nevertheless, Musim Mas is not free of problems – it still sources, for instance, from Indonesian plantation giant Astra Agro Lestari, which has engaged in significant deforestation and peat clearance.