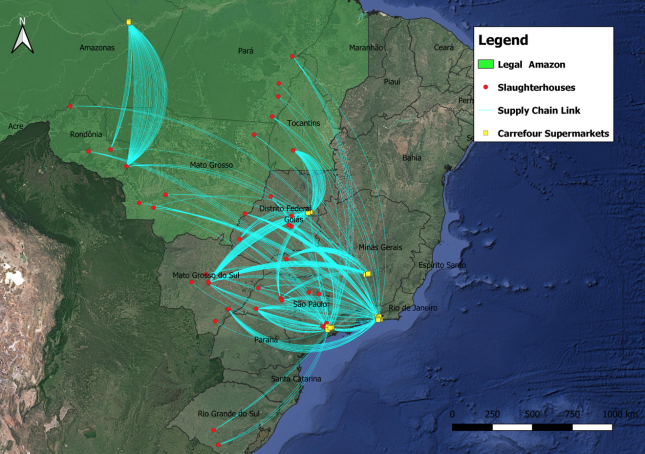 Carrefour SA is a multinational food retailer that holds a majority share in Atacadão SA/Carrefour Brasil, the largest retailer in Brazil. Carrefour’s size makes it a major buyer of Brazilian beef and may expose it to deforestation risks, as cattle contributes to deforestation in the Brazilian Amazon. This report analyses Carrefour’s deforestation risk exposure based on samples collected through store visits. Chain Reaction Research (CRR) visited 48 Carrefour supermarkets in five Brazilian cities, and inspected 480 randomly selected frozen beef products. Data from the product labels establishes supply chain links between Carrefour supermarkets and slaughterhouses located in the Legal Amazon.

Please listen to our webinar on this report here. 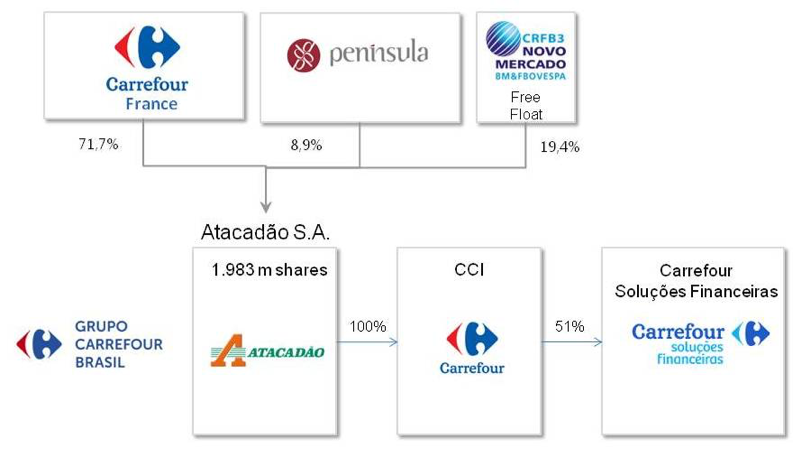 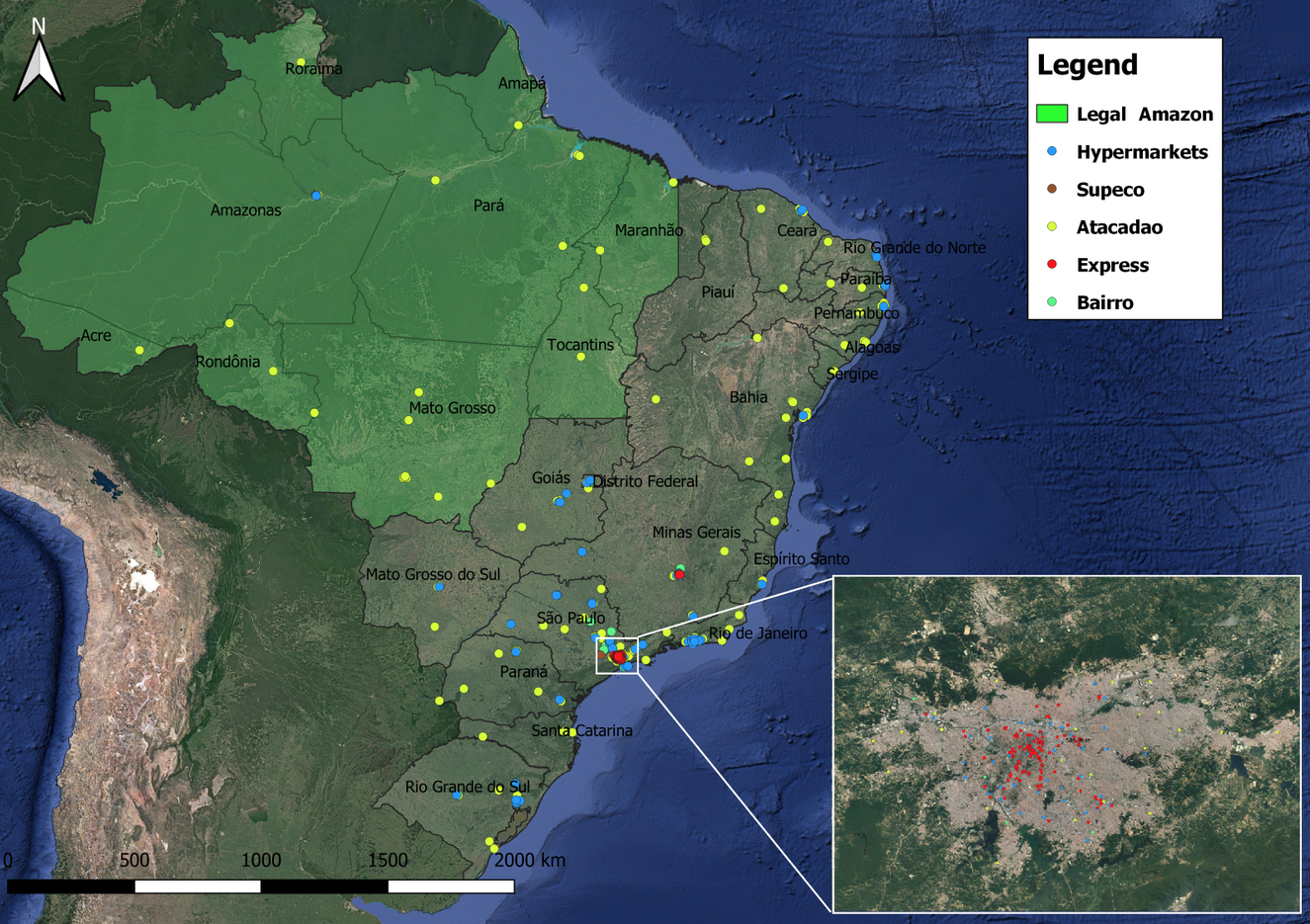 Atacadão, the company’s Brazilian wholesale store division, is rapidly expanding. Atacadão gross sales increased 10.2 percent in 2018 due to faster expansion. It opened 20 new store units last year, compared to 10 to 12 previously. The expansion is in line with the Group’s 2022 Transformation Plan to accelerate the Atacadão “Cash & Carry” format. Carrefour Brasil plans to invest BRL 1.8 billion (USD 443 million) in store openings in Brazil in 2019.

Carrefour Brasil, as the largest retailer, is a major buyer of Brazilian beef. It sells 24,000 tons of unprocessed beef in its Brazilian stores each year. Carrefour Brasil’s role in the beef supply chain consists of buying fresh and frozen beef, either from slaughterhouses/meatpackers or from distributors/wholesalers, and then selling to consumers in its stores.

Forty-nine percent of the Amazon slaughterhouses have signed legally binding Terms of Adjustment of Conduct (TACs) with Brazil’s federal government. Through these agreements, they have committed to buying cattle from only ranches free of deforestation since 2009. The Brazilian Federal Public Prosecution Service (MFP) can carry out sanctions without court intervention against signatories that do not follow TACs. Compared to SIF slaughterhouses, fewer SIE slaughterhouses have signed TACs. While TACs offer a promising instrument for curbing deforestation, signatories may still have to contend with risks associated with deforestation, such as leakage of products from non-TAC signatories.

Carrefour Brasil has 30 supermarket operations in nine Amazon states (Figure 3). Carrefour’s presence in the Amazon allows the company to legally source beef from slaughterhouses with SIE and SIF licenses. 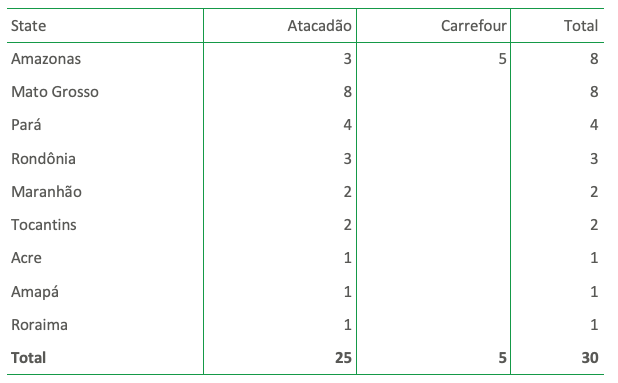 Carrefour has committed to eliminating deforestation from its products by 2020. Carrefour’s Forestry Policy includes Brazilian beef as one of its four key raw materials, in addition to palm oil, soy and pulp and paper. In its Beef Sourcing Policy, the company’s target is to verify that 100 percent of its fresh Brazilian beef sold in Carrefour Brazil complies with five key criteria to prevent farms from producing meat in:

Through a geo-referencing tool, developed in partnership with Agrotools, “data provided by beef suppliers will be crossed with public criteria in order to identify any non-compliance with the five criteria that have been introduced.”

Carrefour SA also announced the Act for Food program in 2018, with nine actionable commitments. By improving food quality, the company seeks to bolster its supply chain transparency. Carrefour’s new plans are particularly important to the beef market in Brazil and will likely build on previous initiatives in the country. Such initiatives include the USD 1.5 million investment in the sourcing of sustainable beef and the Mato Grosso initiative. This latter program seeks to restore degraded land and protect forests in the Cerrado and Amazon regions of Brazil. A platform is included in which ranchers and farmers can register their sustainable practices to connect with corporate procurement officers and strive to meet zero-deforestation commitments.

Carrefour recognizes that tracing and monitoring of indirect suppliers remains a critical challenge. Cattle commonly move between various locations during their lifespan before reaching slaughterhouses. Thus, cattle may be raised on recently deforested pastures before moving to a compliant ranch. Meatpackers generally lack effective tracking systems to monitor and control their indirect supply chains. Carrefour has committed to “supporting additional initiatives aimed at indirect supplier monitoring.”

Carrefour does not publish progress reports for its deforestation policies, nor does the company publish a list of its beef suppliers.

Samples show the origin of frozen beef in Carrefour’s stores

In order to assess whether Carrefour’s zero deforestation beef policy is adequate to mitigate its exposure to deforestation risks in its beef supply chain, CRR sampled 480 frozen beef products found in Carrefour-operated stores. Each of these samples contained the name, location and tax identification number of the supplying meat processor (Figure 4). 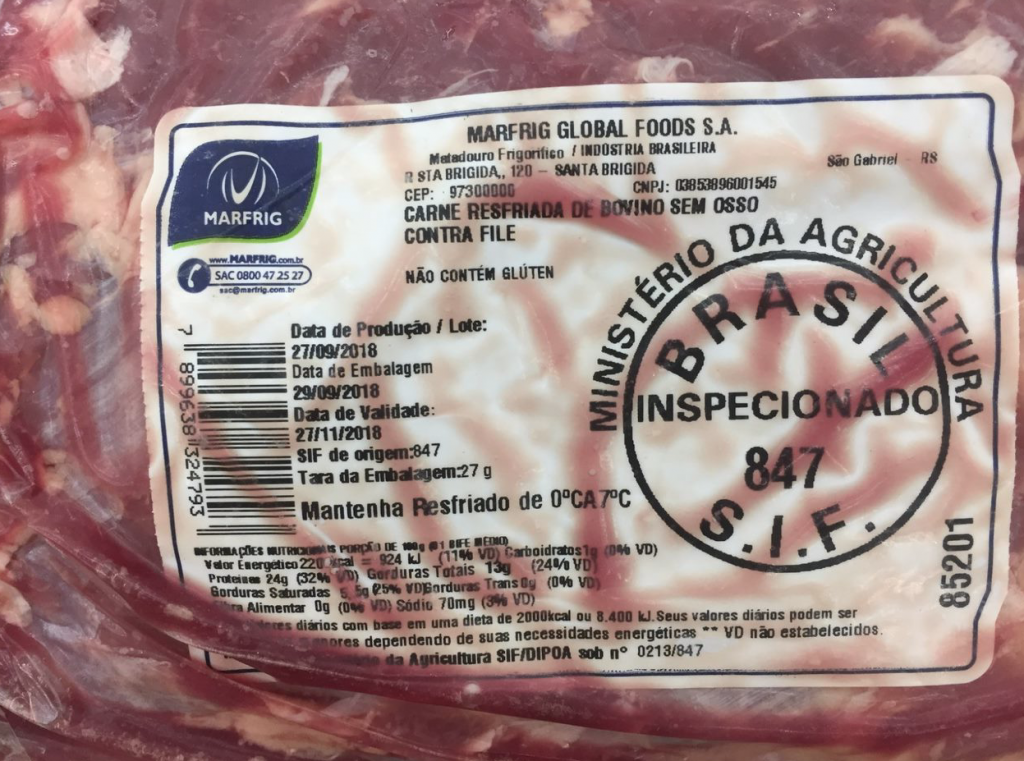 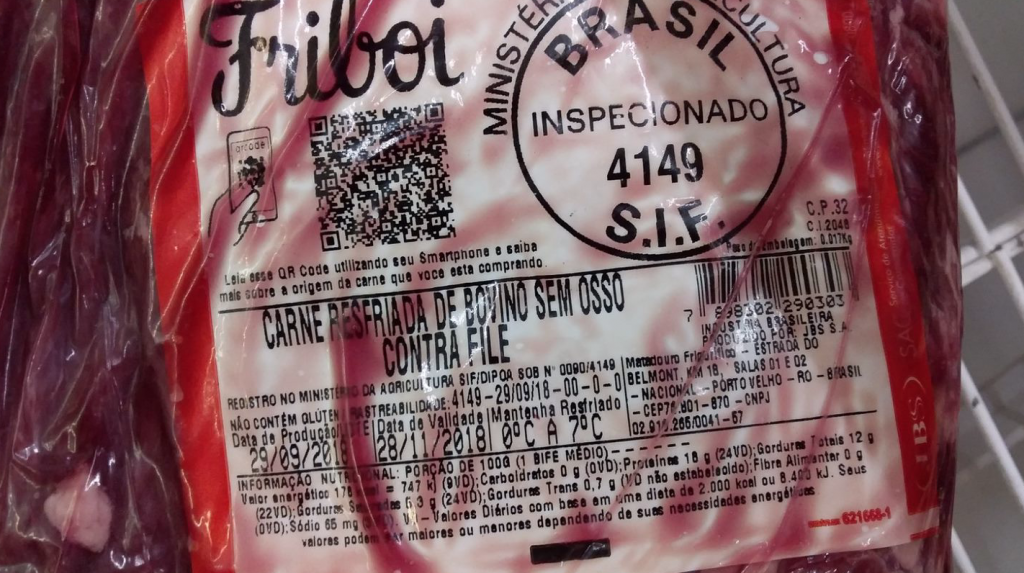 Samples were randomly collected during visits to 48 Carrefour-owned supermarkets in November 2018. The sample includes frozen beef products sold in five different Brazilian cities, including Manaus, located within the Legal Amazon. CRR selected supermarkets from states and municipalities with the highest presence of Carrefour stores.

CRR assessed deforestation risks for each of Carrefour’s suppliers based on the following:

The latter is based on a 2017 Imazon study that ranked slaughterhouses’ exposure to deforestation risks based on the characteristics of buying zones. The slaughterhouses most exposed to risks had supply sheds that included:

Figure 6 visualizes the supply chain linkages of Brazilian slaughterhouses and Carrefour supermarkets identified through the analysis of 480 Carrefour beef products. 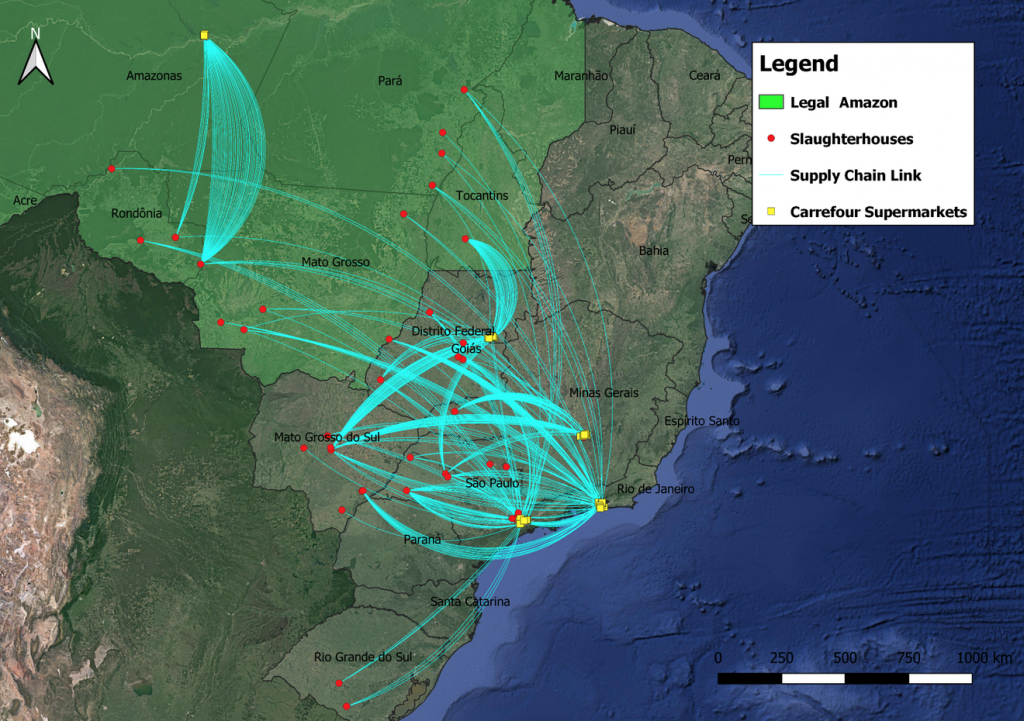 Of the total sample of 480 beef products, 11 products (2.3 percent) originated from high-risk slaughterhouses in the Amazon. Carrefour sourced these products from three meatpacking companies: JBS, Marfrig Global Foods, and Mercúrio. The slaughterhouses are all TAC signatories. Sourcing from slaughterhouses with TACs may still carry large risks because deforestation occurs in their supply sheds.

Three other beef products are linked to Marfrig Global Foods’ slaughterhouse in Mato Grosso (Tangará da Serra). In 2012, the State Public Ministry denounced this unit for labor irregularities. The site was also temporarily shut down shortly after the “Carne Fria” (cold meat) operation in 2017. This federal investigation exposed 15 meatpackers and 20 farms that purchased cattle that were grazed on illegally deforested land in Pará.

Figure 8 below depicts the locations and supply chain links of these three high-deforestation risk slaughterhouses and Carrefour.

Figure 8: High Risk Slaughterhouses in the Amazon Supplying to Carrefour 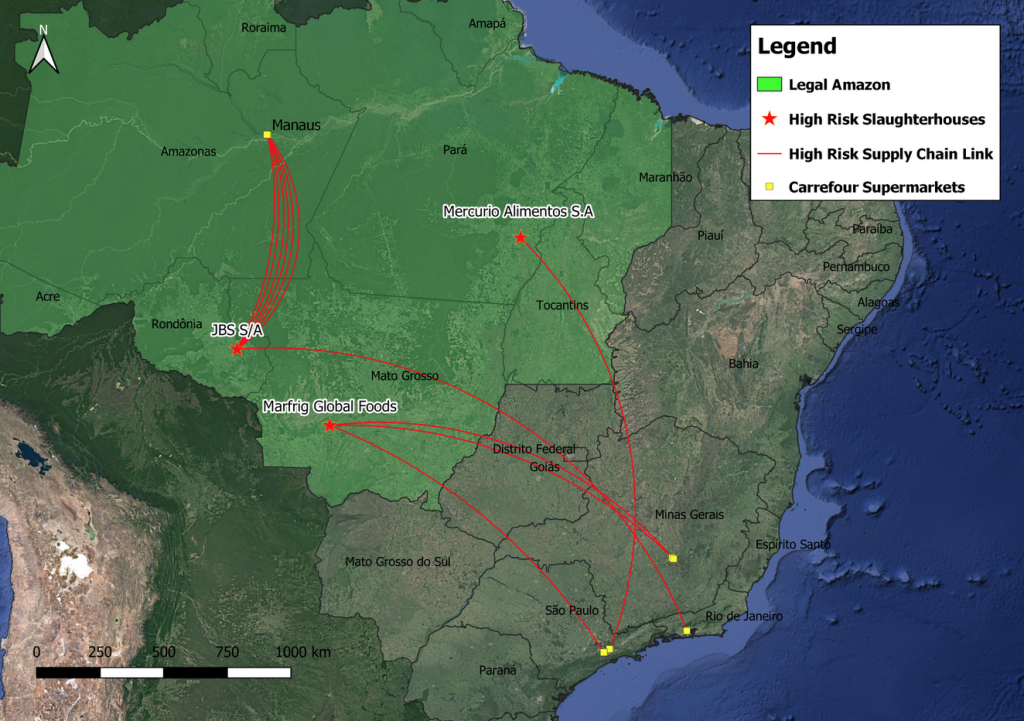 Thirty-one sampled meat products are linked to Cooperativa dos Produtores de Carne e Derivados de Gurupi in Tocantins, the only Amazon-based supplier in the sample that did not sign a TAC. All 31 products from this meatpacking plant were found in Carrefour supermarkets in Brasília. Despite not having signed the TAC, this meatpacking plant ranks very low on deforestation risks.

Thirty-seven meat products in Carrefour’s stores originated from JK Distribuidora de Carne Ltda (JK), located in Manaus. JK is a distributor that does not operate its own slaughterhouse, and thus represents an intermediary in Carrefour’s supply chain.  JK’s four known suppliers are from Amazonian states Rondônia and Acre. However, they each have a low deforestation risk profile. The products linked to this distributor are therefore considered to have limited impact on deforestation. JK’s sourcing manager told CRR that Carrefour does not require its suppliers to have a TAC, and only asks for SIF registration.

In CRR’s findings, Carrefour sourced more of its beef products from the Legal Amazon (35 percent) than its competitor Cencosud (23 percent). CRR researched Cencosud in a separate report published in October of last year. Despite the higher percentage of sourcing from the Legal Amazon, Carrefour is linked to significantly less high-risk suppliers (2.3 percent of all samples) than Cencosud (7 percent). As such, Carrefour’s exposure to deforestation risks in its beef supply chain appears less pronounced than Cencosud’s exposure. As Carrefour has a zero-deforestation policy unlike Cencosud, reputational risks from peer comparison studies are relatively low.=

However, any failure to meet its 2020 target of deforestation-free beef supply chains could impact Carrefour’s reputation. Its beef purchases could heighten reputational risks should Carrefour be exposed to deforestation in its supply chain. In that context, the three high-risk suppliers identified in this report may jeopardize Carrefour’s business relations with clients and consumers.

The risks for Carrefour Brasil and Carrefour SA can be distinguished as follows:

In total net revenues, the Brazilian operations total 17 percent to Carrefour’s 2017 global revenues (Figure 9). In EBITDA and net profit (before minority deductions), the percentage of contributions from Brazil were even higher at, respectively, 29 percent and 70 percent. In 2018 the net profit contribution is estimated at 51 percent. These calculations abstract from third party contributions.

Carrefour Brasil registered growth during the FY2015-17 period. In FY2018, Carrefour Brasil realized a 7.6 percent higher gross turnover in Brazilian Real, mainly due to store openings, but in US Dollar terms it recorded a decline. Revenues and profits are forecasted to recover in FY2019 (Bloomberg consensus estimates; Figure 10) following a recovery in the economy and the Brazilian real. 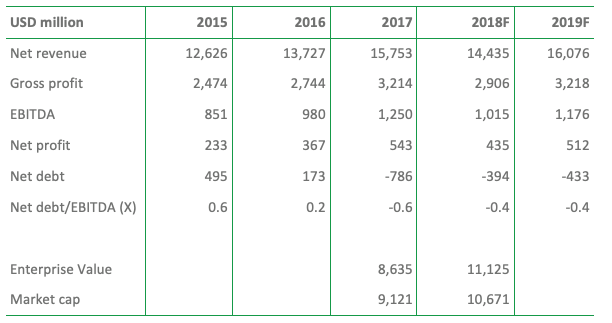 Carrefour Brasil may face reputational risks and could lose customers and market share. As a result, Carrefour SA may feel repercussions. If Carrefour Brasil becomes subject of civil society/consumer campaigns related to sourcing beef from deforested Amazon areas, the company may suffer reputation damage, at least in the short run. For instance, losing two to five percent of its customers in its Brazilian supermarkets would lead to the following impact on Carrefour Brasil: 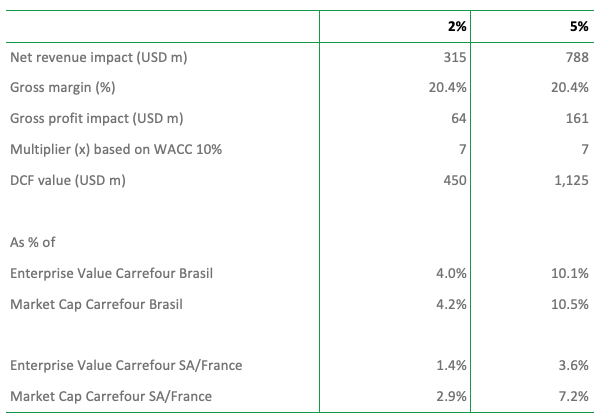 Given that its Brazilian supermarkets and cash & carry stores are important to Carrefour SA, the French entity could also see financial impacts (see Figure 11, last two lines). If Carrefour Brasil’s reputation value is adversely impacted, there would be a ripple effect felt by Carrefour SA. The value impact for Carrefour SA’s Enterprise Value and Market Cap would be in the range of respectively one to four percent and three to seven percent.

Carrefour SA holds 72 percent of the shares of Carrefour Brasil. Remaining shares are held by Peninsula and other investors through the stock market (Figure 12). 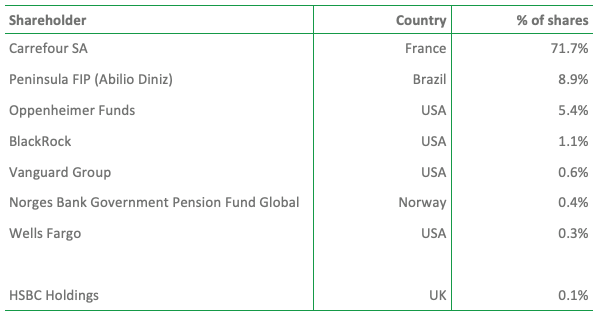 The global entity Carrefour SA carries a high amount of gross debt, mainly in bonds. Carrefour Brasil has a net cash position in 2017-18, which amounts to USD 394 million at the end of 2018F (Figure 10). By contrast, Carrefour SA/France has a net debt position of USD 4.2 billion in 2018F, and Bloomberg consensus estimates point to USD 3.4 billion by the end of 2019F.

If Carrefour Brasil’s EBITDA is impacted by civil society/consumer campaigns (see scenarios figure 11), Carrefour SA/France could face potential financing risk, given that this unit has a net debt position. However, the impact on the net debt/EBITDA ratio of this unit would likely be minimal. The ratio would increase from 0.79X to 0.81X pro forma 2019E (Figure 13).

Of the bondholders, Deutsche Bank and BNP Paribas have ESG policies on cattle. 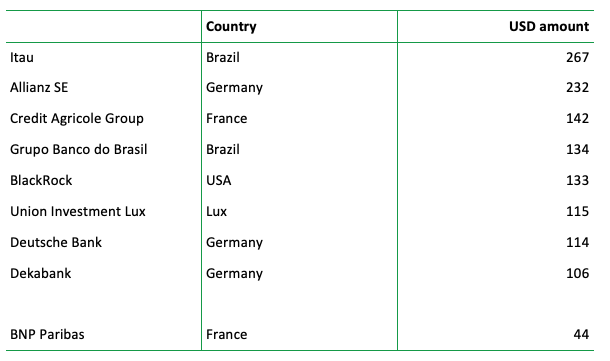 When combining shareholders and bond/debt holders, only a small percentage of the total financing has ESG policies on deforestation. In combination with the net debt/EBITDA ratio, which is relatively low (at Carrefour SA and even negative for Carrefour Brasil), the WACC (weighted average cost of capital) will not likely be affected materially if investors reduce their holdings.