After past controversies, Grupo Palmas is now shifting to a zero-deforestation approach. On April 4, 2017 Grupo Palmas published its No Deforestation, No Peat, No Exploitation (NDPE) policy that covers palm oil and cocoa. This creates new business opportunities, while also stranding its past expansion plans. These undeveloped concessions would be financially risky to develop.

Consumer goods company Alicorp is the Peruvian market leader in all these segments. They control 51 percent of the cooking oils market, 66 percent of the margarine market and 82 percent of the laundry soap market. Grupo Romero also owns 46 percent of Alicorp. This makes Alicorp both a competitor and affiliate of Grupo Palmas.

In 2006, Palmas del Espino invested USD 39.8 million to establish the Shanusi project to increase oil palm cultivation in San Martin and Loreto. Palmas del Espino also invested USD 11.5 million in a palm oil biodiesel refinery. In 2012, Grupo Palmas invested USD 18 million in the first stage of developing the Industrias del Shanusi palm oil extraction plant. In 2015, they financed the construction of both a special oils refinery and a biogas electricity generation plant. The financiers of these projects are unknown.

In 2014, new senior management entered Grupo Palmas. This resulted in a new sustainability value proposition within the company. Grupo Palmas’s April 4, 2017 NDPE policy is a culmination of these efforts.Some of its subsidiaries are also obtaining RSPO certification, while the company also recently joined The Forest Trust.

Grupo Palmas has interlocking executives with Alicorp, the consumer goods company that is both an affiliate and a direct competitor for B2B customers: 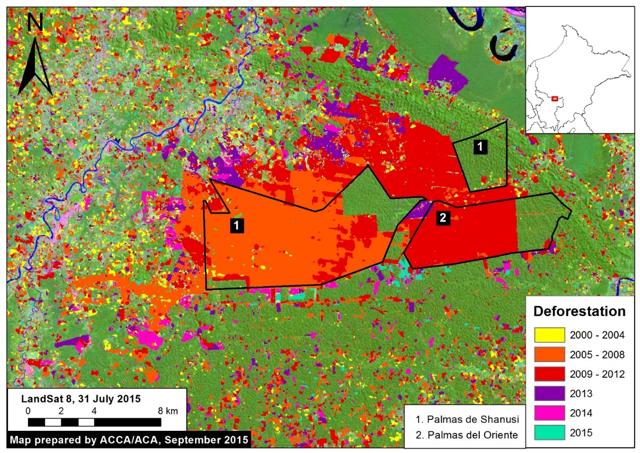 In 2015, Grupo Palmas was criticized for its plans to develop four new palm oil projects in Loreto. These four potential projects are shown in Figure 2 below.

These projects could result in material deforestation supply chain risks. According to EIA, 92 percent of this land consists of primary forest. Full development of these projects into palm oil concessions would result in more than 25,000 ha being deforested. EIA reported that Manití’s and Santa Cecilia’s Environmental Impact Assessments included discrepancies regarding their legally required 30 percent forest reserve. AutoCAD data showed that the legally required 30 percent was not adhered to. Grupo Palmas denies any violations.

Grupo Palmas’ four planned projects may no longer be feasible for palm oil plantation development, as a result of the company’s recent NDPE policy. As such, this land may be stranded land. Stranded land is a stranded asset. Stranded assets are assets that have suffered from unanticipated or premature write-downs, devaluations, or conversion to liabilities before the end of their useful economic life.

As shown below in Figures 3 and 4, since July 2015, satellite footage confirms that no development has occurred in the four projects. The only exception is minor deforestation of 28 ha at the Tierra Blanca concession. 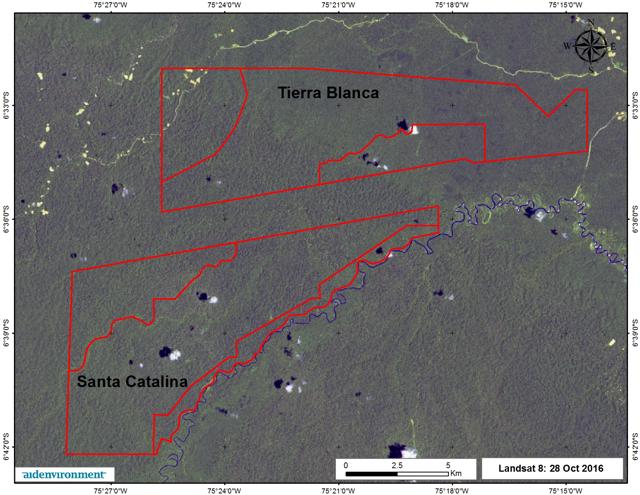 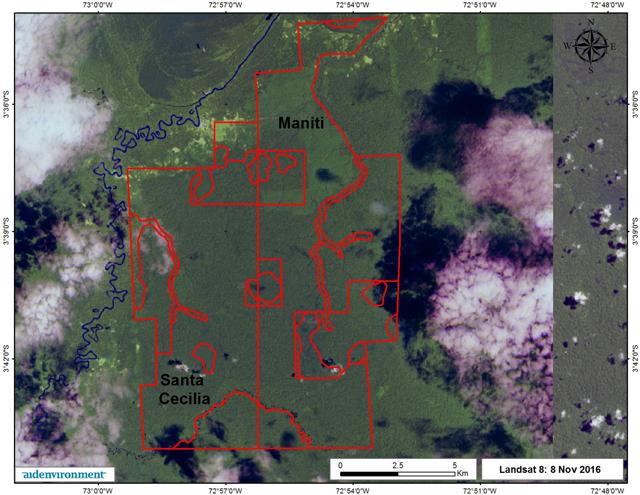 It is unlikely that these projects will be politically, socially or economically viable in the future. The global palm oil market is moving towards NDPE as a market access requirement. At the same time, the Peruvian government is prioritizing stopping deforestation. Deforesting these properties may also violate Grupo Palmas’ pending NDPE policy. This would result in reputational risks.

With these four projects, Grupo Palmas stranded land risk is 25,000 ha. This equals 107 percent of their currently planted area. This illustrates the material risk from stranded land facing Grupo Palmas. For 11,050 ha (Maniti and Santa Cecilia), the company might be able to find alternative value in forest conservation and sustainable land use.

Stranded land risk increases operational and financial risks. Examples include land purchases, costs incurred for obtaining permits, and for conducting environmental impact assessments and other evaluations. There are also possible costs for the preparation of related infrastructure, such as the planned road from Santa Catalina to Pongo Isla. Stranded land can also increase Grupo Palmas’ future net income variability.

Grupo Palmas is working towards a NDPE supply chain with the publication of its April 2017 NDPE policy. The company is an ordinary member of the RSPO. Its Industrias del Espino and Palmas del Espino operations are in the process of becoming RSPO certified. The policy includes High Carbon Stock (HCS) and High Conservation Value (HCV) measures. The policy also includes a no exploitation clause, a commitment to ‘good agricultural practices’ and transparency measures.

Grupo Palmas has indicated that its growth strategy is based on intensifying relations with smallholder farmers. The company aims to increase smallholder productivity and identify suitable non-forested land where smallholders can expand. According to its general manager, Grupo Palmas wants to become Peru’s preferred supplier to companies with zero-deforestation and NDPE policies. They intend to do so through a smallholder deforestation-free supply chain model.

For Grupo Palmas, the benefits of a public and fully implemented NDPE policy include:

Grupo Palmas is now aligned with other Peruvian deforestation-free agriculture initiatives. The Peruvian government officially committed to net zero deforestation by 2021. Peru’s National Forestry and Climate Change Strategy (ENBCC) is the primary framework for this target. ENBCC proposes an integrated landscape approach to forest conservation and restoration. Peru is pursuing investment in smallholder agriculture, monitoring and formalizing forests and strengthening conservation efforts. Peru wants to do this by improving production on existing and degraded land.

The“ National Plan for Sustainable Development of Palm Oil 2016 – 2021” ( PNDS 2016), a joint initiative by the government, palm oil associations and civil society. It comprises of legislative proposals, potential public-private partnerships, mechanisms to increase yields and financial mechanisms. This initiative seeks to ensure sustainable supply matches demand by 2025. To match demand, either cultivation areas must be expanded or productivity must be improved. PNDS has identified suitable non-forested or degraded areas for palm oil cultivation. Stakeholders in this initiative are developing deforestation-free business models. Key models center on improving local outgrower and smallholder association models.

But if Grupo Palmas proceeds with the development of its four planned projects, it is exposed to material business risks. These risks include a loss of market access, reputation and regulatory risks.

Any further deforestation jeopardizes Grupo Palmas’ expansion to international markets. 15 percent of its total sales in 2014 were to international markets. Further expansion to international markets would require compliance with NDPE policies. In 2015, 61 percent of companies active in the palm oil value chain has made a public commitment to zero deforestation. Although these commitments differ in their details, key actors in the palm oil value chain all made such commitments. Sustainability policies are becoming broader, and recently are also including social impacts on palm oil plantations, such as child labor, community conflicts, and occupational health and safety. SE Asian examples like IOI Corporation show that companies involved in deforestation can quickly lose their corporate customer base and face immediate financial consequences.

In the Peruvian domestic market, deforestation concerns appear to be less of a factor to date. However, growing international and domestic efforts to halt climate change, and the increasing recognition of zero-deforestation as a means to that end, might bring additional revenue risks.

Where the legality of land clearing and deforestation is challenged, Grupo Palmas could face regulatory risks in the form of fines and stop-work orders. The Peruvian government has been strengthening environmental regulations. Illegal land clearing and deforestation in Peru are punishable with fines, stop-work orders and revoking of licenses. The Constitutional Tribunal is the highest legal authority in Peru. It has set precedents to the importance of preserving natural resources. While enforcement of deforestation legislation remains an issue, legal cases have been filed. Palmas del Shanusi is currently facing three legal cases concerning its deforestation activities.

Grupo Palmas’ weak financials are a concern. Its high Net Debt to EBITDA of 7.3x gives the company little room to fund new initiatives. Grupo Palmas’ focus should be on generating cash to pay their creditors. This will assist them in reducing their interest expenses.

Its FY2015 revenues were USD 136 million (PEN 462 million). This was a 9.4 percent increase year-over-year. The increase was largely due to greater volume in the agricultural and industrial production segments. This offset the fall in the price of goods sold. The increase in sales was accompanied by a 22 percent increase in expenses. This negatively affected their gross margin.

In 2015, the company experienced an increase in sales of raw materials, oils and special butter. Those gains were partially offset by the reduction in sales of regular butter, processed products and biodiesel. Biodiesel was discontinued due to dumping from Argentina. In January 2016, the I NDECOPI Dumping and Subsidies Commission established countervailing duties. In the future, the company might restart its biodiesel production.

The decrease in price of goods sold occurred because palm oil prices declined in 2015. This was due to the increased supply of palm oil from SE Asia and substitute oils. In 2016, El Niño effects reduced SE Asian palm oil production and prices rose. In H12017, palm oil are expected to remain high. This is despite the La Niña effect. Domestically, prices have been impacted by the strengthening of the PEN against the USD.

This generated debt service coverage of 0.84 times EBITDA. This result also was negatively impacted by higher financial expenses of USD 12 million (PEN 41 million). This is due to an increase of debt in 2015. Debt grew as a result of the spin-off of the Agrícola del Chira assets. Debt also grew from an increase in working capital requirements. Finally, debt increased due to a synthetic hedge that involved borrowing in PEN with the proceeds invested in USD.

In FY2015, its assets were USD 491 million (PEN 1,670 million). This reflected a decrease of 32.1 percent compared to year-over-year. This is from the spin-off of assets of Agrícola del Chira. The current assets to total assets ratio rose from 4.8 percent to 11.7 percent. This is due to the decision to accumulate assets in USD to offsets its USD liabilities. This reduced their USD net liability position.

Grupo Palmas finances its assets with 50.1 percent equity and 49.9 percent debt. Its liabilities have increased due to the spin-off of its Agrícola del Chira assets. Liabilities also increased as working capital expanded as the company has grown. The debt increase was also influenced by synthetic hedging used to mitigate exchange losses. Its net debt to EBITDA increased from 3.4x in 2014 to 8x. in 2015, which is a worryingly high number.

Grupo Palmas needs to work on improving the debt service coverage. The debt in local currency for hedging reasons can be positive for the company, however this requires close monitoring. Grupo Romero Net Debt/ EBITDA should be monitored closely, as this indicator is associated with the company’s ability to reduce its debt. To generate the sufficient cash flow Palmas should work in keeping their client base, both in Peru and internationally, and if possible work to expend their buyers.

For the company generating growth is key. However, expanding the agriculture frontier, without taking deforestation into account can create, reputational risks and loss of clients. The first can increase debt costs, the second can reduce margins and both can lead to a solvency and liquidity crisis in the company as debt and debt service are both high. All additional land development needs to be in line with the RSPO regulation, and with the sustainability policies of Grupo Palmas buyers and lenders.