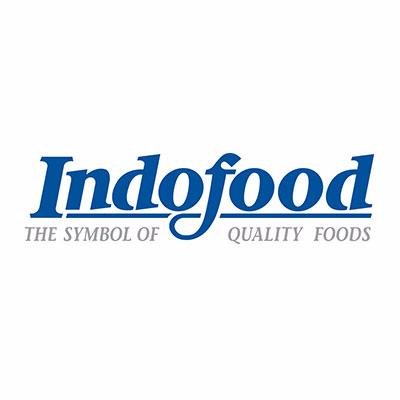 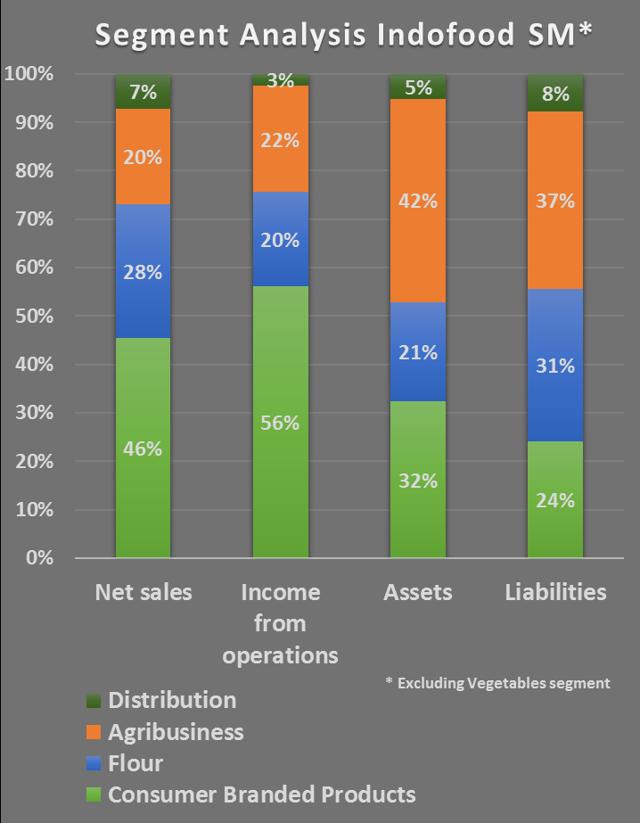 Indofood SM has grouped its business activities in five segments:

Anthoni Salim inherited the family business from his father SudonoSalim. Sudono Salim was  a close friend and business partner of ex-President Suharto. In the 1990s, the Salim family businessesaccounted for 5 percent of Indonesia’s economic output withinterests in food processing and marketing, automotive, chemicals, construction and building materials, real estate, telecommunications, financial services and trading. In the 1990s, via a web of offshorecompanies, the group acquired concessions to develop 1.1 million haof land into oil palm plantations. 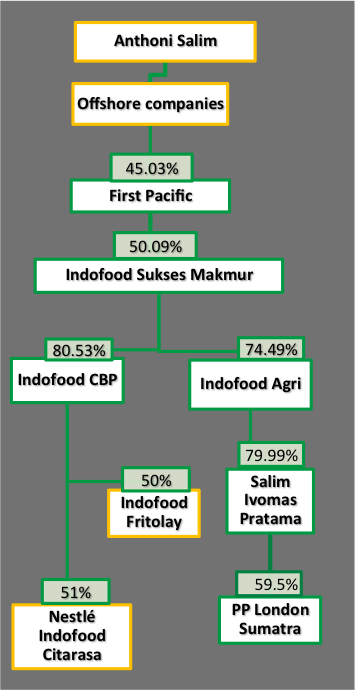 When the Asian financial crisis occurred in 1998, non-performingdebts almost bankrupted Bank Central Asia. The Salim familycontrolled Bank Central Asia. At the time, it was the largest privatebank in Indonesia. The Indonesian Bank Restructuring Agency (IBRA) saved the bank from collapse because of its non-performingdebts. The Salim family was forced to transfer its 25 oil palmplantations, with a total planted area of 260,000 ha, together withits oleochemical businesses to IBRA as compensatory payment. IBRAsold these 25 plantations to the Malaysian company KumpulanGuthrie. Kumpulan Guthrie later merged with Sime Darby.

To maintain control over its diversified companies while seekingforeign investors, the Salim family created a complicated structureincluding many listed and unlisted onshore and offshore companies. On the left is shown a simplified overview of the group structure, focusing on Indofood SM and some of the subsidiaries related to thepalm oil business, and leaving out many other businesses andintermediate vehicles.

In turn, Salim Ivomas Pratama owns 59.5 percent of PT PP LondonSumatra Indonesia Tbk. This is one of the oldest plantationcompanies in Indonesia. Its market value is USD 873 million (IDR11.8 trillion). Aidenvironment calculations estimate the totallandbank of Indofood Agri at 549,287 ha, of which 34 percent areowned by PT PP London Sumatra and 52 percent by PT Salim IvomasPratama. The ownership of the remaining 14 percent is unknown.

The ownership structure of the Salim family businesses, with itsmany listed subsidiaries, aims to optimize the family’s interests. Thestructure focuses on attracting outside financing without losingcontrol. A small group of managers controls these companies, whichderive their sales and market values to a large extent from the sameassets. This creates an imbalance of information between thedominant shareholder – the Salim family – and other investors aswell as potential conflicts of interests, exacerbated by frequent “related party” transactions.

Indofood SM describes its subsidiary Indofood Agri Resources as “one of the largest diversified and integrated agribusiness groups inIndonesia”. Indofood Agri Resources operates oil palm plantations, CPO mills and refineries. But in reality the vertical integration is lessstrong than suggested. According to Indofood Agri, the Plantationssegment sells 55 percent of its CPO to the Edible Oils and Fatssegment and 45 percent to external customers. As a result, therefineries source a 36 percent of their CPO supply from undisclosedthird party suppliers.

The segment revenues reported by the company seem to suggestthat the company’s refineries actually rely even more on externalsuppliers. This is because the reported 55 percent of the CPO volumesold to the refineries yields only 41 percent of the turnover of thePlantations segment. This means that this CPO would be soldinternally for IDR 7 million/ton, while the CPO sold to externalcustomers would yield IDR 12 million/ton. This is not realistic as theaverage CPO market price in 2015 was IDR 7.5 million/ton. Onepossible explanation for this discrepancy is that Indofood Agri inreality sold less than 55 percent of its CPO to its own refineries, increasing its refineries’ reliance on external suppliers.

The extent to which Indofood Agri enforces its own sourcing policyremains unknown. Currently, the company does not follow industrybest practices of publishing lists of its suppliers. While innovativecompanies that are market leaders prohibit development on peatregardless of depth and High Carbon Stock (HCS) forest, IndofoodAgri still allows conversion of secondary forest and peat up to threemeters.

This creates material supply chain risks for Indofood Agri Resources, which can spread to other businesses controlled by Anthoni Salim. In2015, IDR 3,854 billion (28 percent) of Indofood Agri total saleswere to related parties. Of this percentage, 11 percent was sold asedible oils and fats products to Indofood CBP, to be furtherprocessed into products like noodles and baby food. Another 2percent was sold to other subsidiaries of Indofood SM – most likelythe Distribution segment – while another 15 percent was delivered toother Salim-controlled businesses.

Anthoni Salim controls indirectly various private oil palm plantationsnot owned by Indofood Agri Resources. Some are producing CPO, while others are under development. Salim’s ownership ties meanthese plantations might sell palm oil to Indofood Agri’s refineries. Several of these privately owned plantations are involved indeforestation and peat development. This could amplify supplychain, reputation and regulatory risks for Indofood Agri and IndofoodSM. Some examples are described below.

From 2011 to 2015, 4,857 ha were cleared by PT SKL and PT DRM. Of this area, 4,300 ha (89 percent) were still forested in early 2013. The deforestation maps are available in Chain Reaction Research’spublished report on Indofood Agri Resources.

The Ministry of Environment and Forestry banned the developmentof peatland for oil palm development in November 2015 stating, “land opening or new land clearing within peatland for plantationpurposes is not allowed anymore”. But satellite imagery shows thatfrom September 2015 to September 2016, in violation of thepeatland moratorium, PT SKL and PT DRM cleared 6,277 ha.

Both plantation companies have commenced planting. They will mostlikely sell their fresh fruit bunches to the closest mills owned by theWings, Lyman, and Incasi Raya Groups, all of which rely on refinerswith NDPE policies such as Wilmar, Musim Mas, Golden Agri-Resources and others. The latter will now likely instruct these thirdparty suppliers to exclude Salim’s subsidiaries from their supplybase. PT SKL and PT DRM will have to invest in their own CPO millsto access markets. Other than Wilmar’s CEKA refinery in Pontianak, the only refinery facility in the province and proactivelyimplementing Wilmar’s NDPE policy.

In 2012, the Centre for Orangutan Protection (COP) filed a formalcomplaint against PT Gunta Samba Jaya (PT GSJ) in East Kalimantanfor the clearing of orangutan habitat inside the concession. COPbelieved that this was a Salim Ivomas Pratama/Indofood Agrisubsidiary given on-the-ground reports. Indofood Agri’s CEO flatlydenied in public that the company was an Indofood Agri or SalimIvomas Pratama subsidiary. A Salim family member successfullyresolved the case.

In 2016, the Indonesian NGO MIFEE traced the ownership of four oil palm plantation companies in West Papua to an offshore trust with aSalim address – Jalan Ahmad Yani kavling 23 No. 15, Jakarta. This isthe same address of the Salim owned plywood business PT KayuLapis Asli Murni (Kalamur). Some of the West Papua companies’ executives were previously part of the management of Salimbusinesses. The four plantation companies have acquired plantationconcessions covering a total area of 135,620 ha. 86 percent of the135,620 ha total concession’s landbank remains undeveloped. It iscovered by forest and peatland. Any further development isexpected to escalate deforestation and deforestation related supplychain risks. 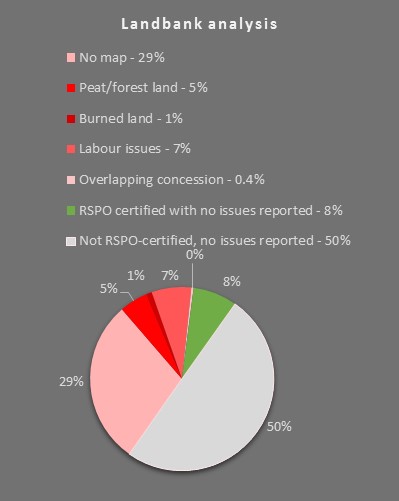 According to the complaint, Indofood Agri violated more than 20Indonesian labor laws on two plantations in North Sumatra. Theseviolations may be  systemic in nature. Among the exploitativepractices documented are:

The complainants requested that the RSPO membership status of thetwo Indofood Agri subsidiaries be suspended until transparentactions are taken to resolve the violations. A RPSO ruling is expectedin 2017. In the meantime, Accreditation Services International (ASI) retracted the accreditation of Indofood’s certification body, SAIGlobal, in December 2016.

Based on NGO community experience with the company, IndofoodAgri’s management is expected to pursue a highly defensivestrategy, which may increase the probability of a group suspension, or a voluntary retreat from RSPO. If the company were suspendedfrom the RSPO, it would be excluded from certified sustainable palmoil supply chains. Indofood Agri might lose a price premium for 38percent of its total CPO production. But as was shown by the 2016 RSPO IOI Corporation case, an initial suspension may magnify intoan unexpected and uncontrollable flow of interventions by investors, buyers, joint venture partners and consumers. 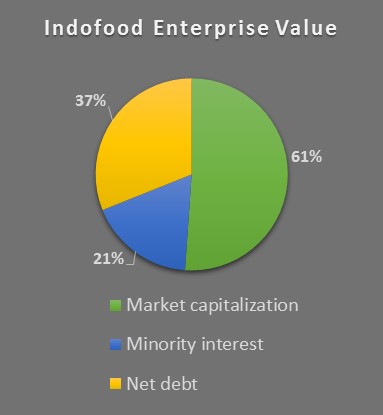 Indofood SM is 50.07 percent owned by First Pacific, via CABHoldings. The remaining Indofood SM free float shares, 49.03percent, are owned by a number of foreign and domestic investors. Figure 1 below lists the most important outside equity investors inIndofood SM.

Indofood SM’s direct and indirect ownership of concessions and CPOsuppliers with contested land and labor practices may violate theseinvestors’ No Deforestation, No Peat, No Exploitation (NDPE) policies. This possible violation may drive up Indofood SM’s cost ofequity.

For example, the American fund manager Dimensional FundsAdvisors, who recently divested palm oil positions with similarfinancial risks from two of its portfolios, has a 1.63 percentownership stake in Indofood SM.

As net debt accounts for 18 percent of the company’s enterprisevalue and bank loans account for 80 percent of its total debt, banksare important stakeholders in Indofood SM. Indofood SM’s bankloans outstanding at the end of 2015 are listed above in Figure 2. 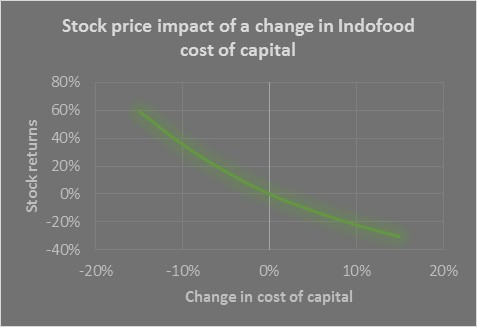 As shown above in Figure 3, Indofood SM underperforms versus itspeers and consensus estimates. Indofood SM has P/E andEV/EBITDA ratios below its peer group for fiscal year 2016 and fiscalyear 2017. This shows that expectations for Indofood’s performanceare already lower than for its peers. Additional negative informationmay also severely affect its equity returns.

Because of this close integration, Indofood SM’s lenders andinvestors could conclude that the company is contradicting their ESGlending and investing policies through these financially materialupstream relationships. These reputational risks could result inactivities similar to Dimensional Funds Advisors recent divestmentactivity. The threat of losing banks and investors could consequentlyraise the average costs of capital of Indofood SM.

Assuming a small increase of 5 percent in the cost of capital, due tothe ESG risks surrounding one of Indofood SM’s subsidiaries, adecrease of 16 percent of the market capitalization of Indofood SMwould be possible. 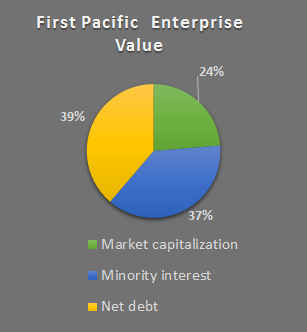 First Pacific is 45.03 percent owned by Anthoni Salim and hisbusiness partners, the other 54.97 percent of the shares are ownedby other investors. First Pacific’s indirect and direct investment inIndofood Agri’s contested land and labor risks may violate the ESGpolicies of these investors, leading to divestments. This developmentmay drive up First Pacific’s cost of equity. Figure 4 below lists themost important institutional investors in First Pacific.

As net debt accounts for 39 percent of the First Pacific’s enterprisevalue and banks account for 50 percent of its total debt, banks areimportant stakeholders of First Pacific. Figure 5 below lists banksproviding loans to First Pacific in the past four years. 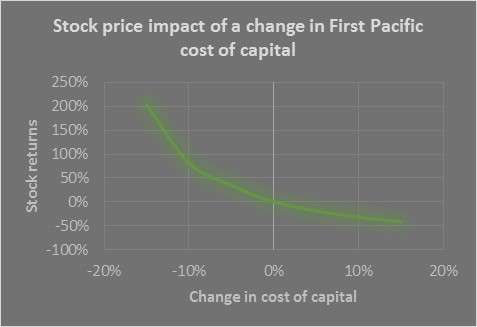 Bank of America, HSBC and others have policies against financing deforestation and child labor. First Pacific and its subsidiaries’ practices are likely violating these. If these banks decide to avoid further lending to First Pacific, this might lead to an increase in the cost of debt. Even a small increase of 5 percent in the cost of capital, due to the ESG risks surrounding one of First Pacific’s subsidiaries, can lead to a decrease 35 percent in the market capitalization ofFirst Pacific. Its high leverage contributes to the significant decline inits stock price, as a result of higher costs of capital.