December 19, 2016
The sustainability policies and recent practices of 10 largest IDX-listed palm oil growers were analyzed and ranked. Together these companies harvest around 10 percent of the world’s oil palm. Climate change, biodiversity loss and human rights abuses were the key elements of screening.

The companies could score a total of 12 points (Appendix 1):

The scores were transferred into the categories red (policies and practices inadequate), orange (should be improved), and green (likely not perfect, yet on the way). Figure 1 below shows the final scores (largest palm oil growers mentioned first). 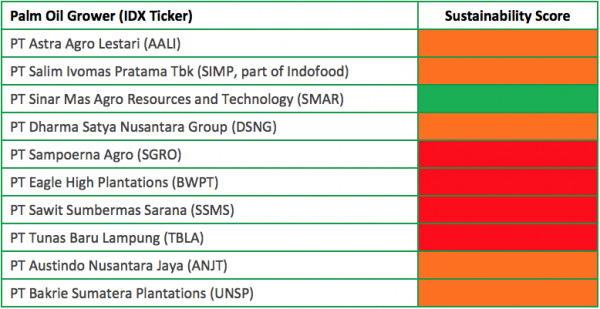 All ten companies reviewed for this analysis experienced severe harvest reductions in 2016, compared to 2015. The lower harvest figures, up to 30 percent, were caused by the severe drought and catastrophic haze in July to October 2015. The drought was accelerated by climate change. The haze made Indonesia one of the largest GHG emitters globally in 2015.

In early November 2015, President Widodo issued a presidential instruction ordering companies to stop developing new palm oil plantations on the fire prone peatlands. On December 5, 2016 the protection of peatlands became law. However, of the 10 largest IDX-listed palm oil growers, five (SGRO, BWPT, SSMS, TBLA and UNSP) have yet to publicly commit to ending peatland development. Among them, TBLA was found to continue peatland development in 2016, and SSMS plans to do so within one of its recent greenfield acquisitions.

Only a few of the 10 largest IDX-listed palm oil growers specifically refer to global principles for social issues, such as the right of local communities to Free, Prior and Informed Consent (FPIC), the core conventions of the International Labour Organisation (ILO) and the United Nations Guiding Principles on Business and Human Rights.

Two companies are presently subject to severe legal and/or government screening related to environmental issues. On August 11, 2016 judges of the South Jakarta District Court ordered SGRO to pay more than $80 million for compensation and environmental restoration. TBLA did not comply with the terms of a permit granted by Indonesia’s Environment and Forestry Ministry in 2012.

Risk exposure due to NDPE-policies

Since June 2015, the market force from the NDPE-policies by main traders/processors has led to the strengthening of sustainability policies and practices by 4 of the 10 largest IDX-listed palm oil growers. Two IDX-listed growers (AALI, DSNG) issued stronger sustainability policies, and another two (BWPT, ANJT) suspended their operations in contested areas after buyers’ intervention.