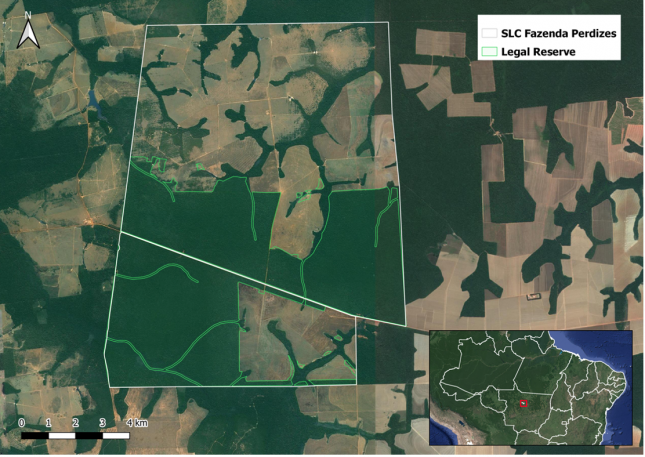 Active fires were detected on the Fazenda Perdizes farm on August 24, 2021 in Porto dos Gaúchos, Mato Grosso. The property is owned and operated by SLC Agrícola, the largest soybean producer in Brazil. Fazenda Perdizes consists of areas held under SLC Agrícola’s ownership and through joint ventures with other companies. The recently detected fires fall within the part of Fazenda Perdizes that SLC Agrícola owns. A previous analysis performed by CRR partner Aidenvironment at the beginning of the 2021 fire season detected another fire at SLC Agrícola’s Fazenda Palmeira property. The current fire at Fazenda Perdizes shows the company’s continued connections to land clearing for farmland development and expansion.

Fazenda Perdizes has a total area of 43,123 hectares (ha), of which 26,295 ha consisted of cropland during the harvesting season of 2019/20. Figure 1 shows the part of Fazenda Perdizes operated and entirely owned by SLC Agrícola that contains approximately 5,840 ha of legal reserve. The active fires detected on August 24 fall inside the legal reserve area (Figure 2). According to Brazil’s Forest Code, this area is required to remain intact and covered with native vegetation. 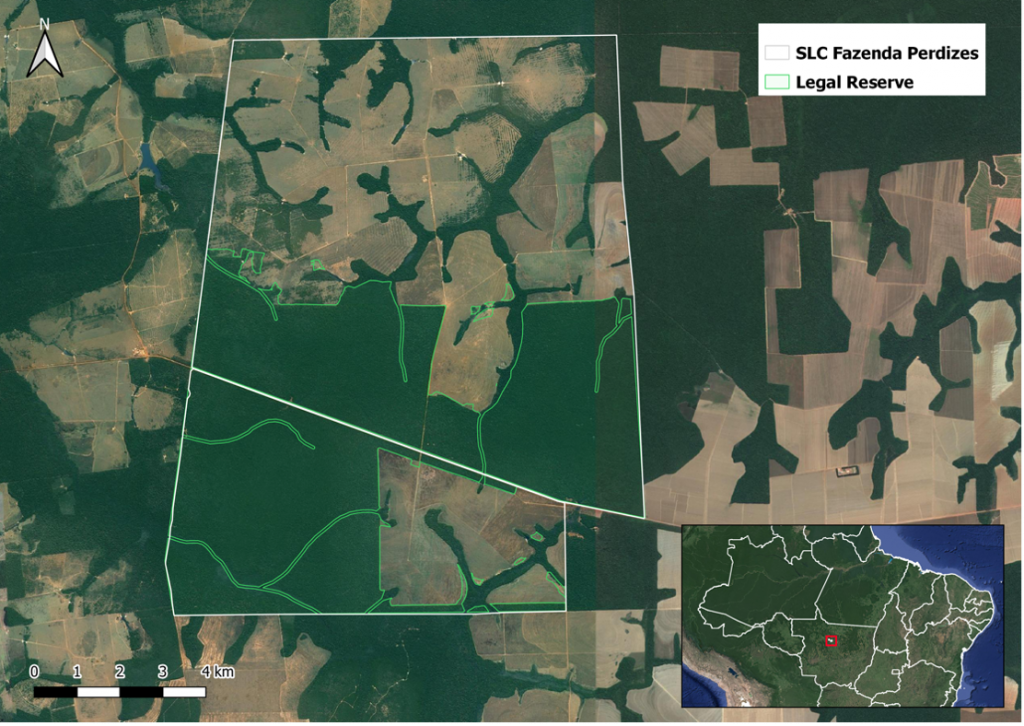 Figure 2: Fires detected on August 24 in the Legal Reserve of a parcel of Fazenda Perdizes operated and entirely owned by SLC Agrícola in Porto dos Gaúchos, Mato Grosso, Brazil 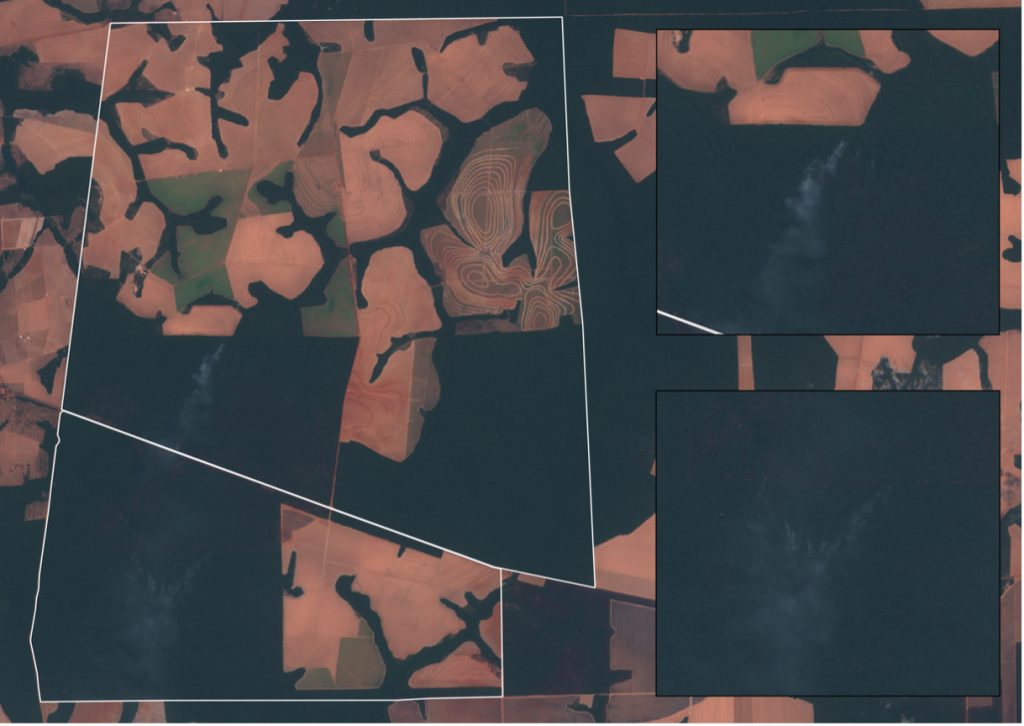 Note: Smoke from the active fires is visible in the middle and southern part of the farm. Frames on the right side show the zoom-in to the fires and smoke.

Figure 3. Fires detected on August 29 in the Legal Reserve of a parcel of Fazenda Perdizes operated and entirely owned by SLC Agrícola in Porto dos Gaúchos, Mato Grosso, Brazil 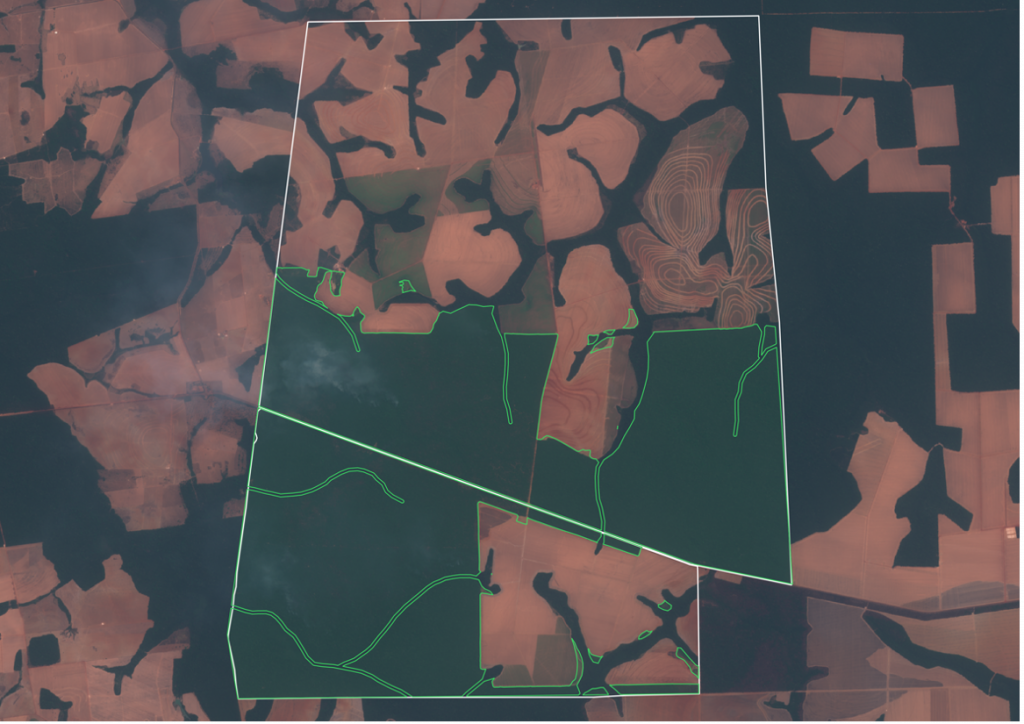 Source: CRR monitors land clearing by top deforesters such as SLC Agricola via CRR partner Aidenvironment’s in-house geospatial dataset. Aidenvironment analysts identify deforestation hotspots and trace fire alerts to commodity supply chains based on company data, public records, and datasets from local partners. Note: Smoke from the active fires move to the nearby areas of the mid and southern part of the farm.

In March 2021, SLC Agrícola stated that it will no longer convert new areas in all of its properties after the current year’s harvest season. SLC Agrícola’s prior commitment to halt Cerrado deforestation in September 2020 similarly led to continued clearing despite its zero-deforestation pledge. As CRR reported, the company was the top deforester in the Cerrado in 2020, and its largest buyers include Cargill, Bunge, and Amaggi (a joint venture between Louis Dreyfus, Amaggi Group, and Zen-Noh). All three have zero-deforestation commitments and are exposed to deforestation risk from continued trade relations with SLC Agrícola. Cargill in particular has faced commercial pressure over its role in deforestation in Brazil. In July 2020, Cargill publicly stated that “deliberate setting of fires in the Amazon is unacceptable.” Continued fires and forest clearing are in violation of the zero-deforestation commitments of SLC Agrícola’s customers and a large portion of downstream soy-consuming industries.

SLC Agricola is mainly financed by Brazilian investors and banks with low scores in ESG policies, according to Forests & Finance. Large investors are Odey Asset Management (USD 49 million), Bradesco, Vanguard, Grupo XP, and BlackRock. Large creditors include Itaú Unibanco (USD 13 million) and BNDES. On June 18, 2021, SLC announced to partner with Rabobank on a BRL 200 million loan linked to the company’s sustainability targets. CRR held discussions with Rabobank on this loan. The targets and KPIs in this loan for reducing carbon emissions “relate to SLC Agrícola’s own publicly communicated target to reduce carbon emissions scope 1 and 2 by 25 percent in 2030, but with a shorter time horizon. This includes land use and land use change, and will follow the GHG Protocol,” according to the Rabobank. The current fire data analyzed in this Chain appear in conflict with Rabobank deforestation policies, which could bring about engagement.