The Chain: Indonesian government cracks down on corruption and deforestation

Indonesian government cracks down on corruption and deforestation

The Indonesian government has shown some signs of cracking down on corruption and illegal forest clearing in the country’s palm oil industry. The Corruption Eradication Commission recently arrested Riau Governor Annas Maamun, who was allegedly caught accepting bribes from a palm oil company. He is scheduled to stand trial at the Jakarta Corruption Court.

Eight other arrests were made in connection to the case, including palm oil businessman Gulat Manuring, as well as the Governor’s wife, driver, and assistant. According to the Jakarta Post, Gulat allegedly paid the Governor nearly $200,000 in order to have a land-conversion permit issued for an oil palm plantation business.

Separately, the High Court of Banda Aceh recently denied an appeal by PT Kallista Alam, an Indonesian oil palm supplier, to overturn penalties for illegal forest clearing. Earlier this year, the company was found guilty of destroying over 1,000 hectares of protected peat forest in the Gunung Leuser ecosystem of Sumatra. According to Mongabay, the Court upheld the previous lower court ruling, which fined the company $30 million in penalties and restoration fees. Additionally, several company leaders, including its director and field manager, face individual fines and prison time.

One of the major drivers of this decline is the over-supply of palm oil that followed the market peak in 2011, when high prices spurred a new wave of plantings. The fruit of this additional wave of planting is now flooding global markets, leading to high stockpiles. Combined with an expected large soybean harvest in the United States and elsewhere, there has been significant downward pressure on prices, showing that palm oil is not immune from classic commodity price cycles. The declines come despite policy interventions meant to shore up prices, such as increased biofuels mandates and reduced tariffs on palm oil exports in Malaysia.

Overall, since their highest point in February 2011 at $1,248.55 per metric ton, global palm oil prices have dropped approximately 47% to today. The low prices have dampened enthusiasm in some regions for establishing new plantations on marginal lands that produce lower financial returns, notably including carbon-rich peat lands. 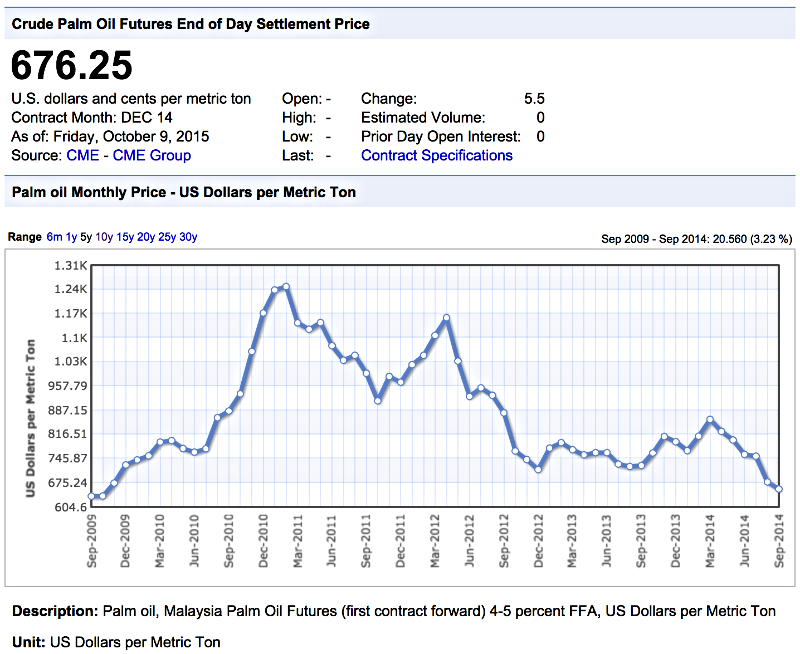 Sime Darby (SIME:MK), the world’s largest palm oil planter by land size, has made a bid to purchase New Britain Palm Oil (NBPO:LN) for an estimated $1.74 billion. The acquisition of NBPO’s 135,000 hectares would increase Sime Darby’s global land bank to nearly one million hectares, and would significantly increase the company’s holdings in Papua New Guinea. Indonesia recently announced a proposal to reduce foreign ownership of commodity plantations from 95 percent down to 30 percent, prompting outside companies to search for high-yielding assets elsewhere.

The move is also an effort to increase Sime Darby’s share of the sustainable palm oil market. NBPO has 100% RSPO certification and is currently working with The Forest Trust to finalize a comprehensive High Carbon Stock protection policy for its supply chain. In contrast, Sime has struggled to counter a backlash from the media and some consumer companies after leading a group of Malaysian companies that tried to create a new standard for protection of High Carbon Stock forests that could undermine the policies adopted by GAR, Wilmar, Cargill, and other major global companies. Sime Darby’s bid can be seen in the context of its effort to catch up to industry sustainability leaders such as Wilmar, GAR, and Cargill.

A new report from the advocacy organization Forest Heroes ranks 18 of the world’s largest palm oil companies, judging them on forest conservation, peat protection, and respect for human rights and local communities. The rankings are designed to be a tool for both consumer companies and financiers to evaluate purchases and investments in leading palm oil suppliers in a rapidly changing market.

The report gives industry giants such as Wilmar (WIL:SP), Golden-Agri Resources (GGR:SP), and Cargill that have in the past year adopted “No Deforestation, No Peat, No Exploitation” policies a ranking of “Green Tiger,” to recognize how they are successfully adapting their business strategies to help advance a new era for agriculture that combines increasing production with conservation of forests and other ecosystems.

At the same time, the report ranks on the “Red List” some of Southeast Asia’s largest companies, including Musim Mas, KLK (KLK:MK), and First Resources (FR:SP), who have continued with forest clearing and human rights and labor violations in spite of mounting pressure from consumers and investors. Companies that still have serious issues in their supply chain but have made some initial strides toward improving their practices, like Bunge (NYSE:BG), are on the “Yellow List.”

The rankings are designed to be dynamic and action by several companies profiled has already changed their status since the report was published. For instance, Bumitama recently launched a pilot effort to protect forests on several of its plantations, and Asian Agri announced a comprehensive No Deforestation policy. As a result, both companies have since been elevated to the category of Yellow List suppliers to recognize their ongoing, but still incomplete, efforts to transform their supply chains. 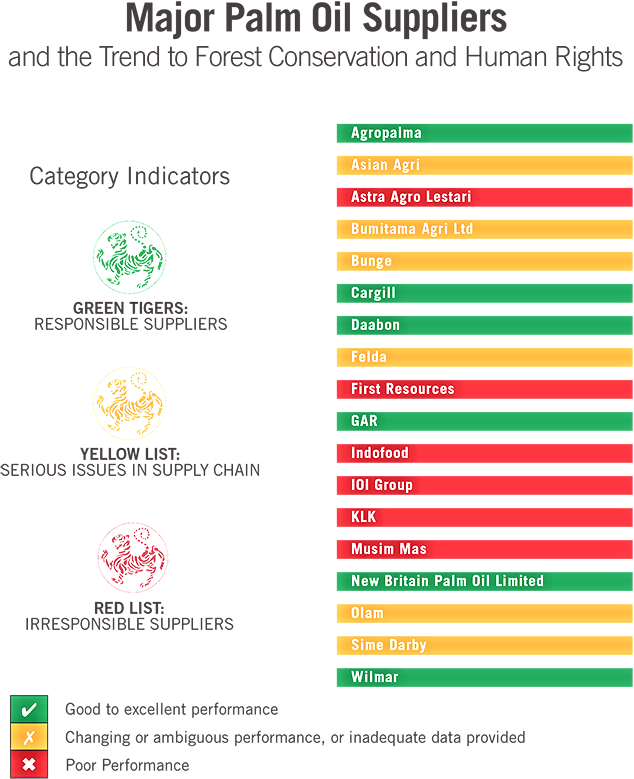 The fully updated report and corresponding graphics of the company rankings are available online at http://www.forestheroes.org/greentigers. The rankings will be updated regularly according to company performance.