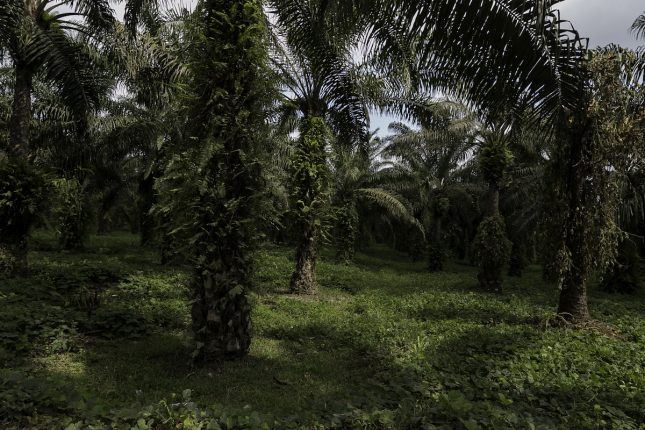 Ecuador’s deforestation levels peaked in 2012 and have fluctuated annually since then, declining to below 40,000 hectares last year. Other South American countries have deforested significantly more hectares overall. Since 2001, Ecuador has lost 757,000 hectares, compared to 2.9 million ha in Peru, 4 million ha in Colombia, and 54 million ha in Brazil.

Agriculture has been the primary driver historically in Ecuador, with coffee, cocoa, livestock, and palm oil currently the top triggers of deforestation. The palm oil industry’s rapid expansion in recent years suggests that its role in deforestation could increase, particularly in the Orellana province in the northern Amazon. In 2018, the Ecuadorean palm oil production area totaled 267,760 hectares (ha), up from 207,285 ha in 2005, according to the national census. And between 2010 and 2016, the industry grew by an average of eight percent per year. Exports, which account for almost 60 percent of the country’s crude palm oil production, have also risen sharply, increasing from 115,000 tonnes in 2005 to 300,000 in 2019. Colombia is the largest buyer, purchasing 56 percent of total exports, with Venezuela and the Netherlands tied for second at 8.3 percent. EU countries and the United States make up about 25 percent. Major international firms that purchase palm oil in or from Ecuador could be exposed to supply chain deforestation risks given the country’s unique market. These companies include Cargill, Bunge Loders Croklaan, ADM, General Mills, Kellogg’s, Mondelez, Unilever, and Nestle.

Approximately 90 percent of Ecuador’s production takes place on smallholder farms, while most if not all of the country’s major palm oil mill owners, traders, and exporters are not publicly traded, making accountability and traceability challenging.

The table below shows the top ten palm oil companies operating along the palm oil supply chain in Ecuador according to the 2017 National Palm Census (Censio Nacional Palmera):

Also worth mentioning is Palmar del Rio, a major market player in Orellana province, where 37.6 percent of the 12,618 hectares planted with oil palm used to be rainforest.

Both industry and government appear committed to working together to reduce deforestation in the country’s palm oil market going forward. Six of the ten companies above are members of the Roundtable on Sustainable Palm Oil (RSPO), but at present, the vast majority of Ecuadorian palm oil firms are not: According the National Census, there are 6,658 palm oil companies in the country, but the RSPO lists only 31 members in Ecuador. This situation, however, could improve in the coming years. The government and the industry recently announced their intention to work together to reduce palm oil-related deforestation by implementing what is known as a “jurisdictional approach” for RSPO certification. Rather than certifying plantations one at a time, a jurisdictional approach aims to certify entire regions as sustainable, in order to bring in smallholders. The formal launch of the jurisdictional approach certification process will occur in September of this year, and the government plans to have the Ecuadorian Amazon certified by 2022. One major player assisting in the move toward sustainable palm oil is PROAmazonía, which is working with the RSPO, local governments, and farmers. One of its main goals is to help farmers raise productivity per hectare so they do not have to deforest areas to expand. PROAmazonía hopes to replicate its palm oil successes in other commodities, such as coffee, cocoa, and livestock.

This unorthodox approach to RSPO certification has distinct advantages for the palm oil industry. It can help players gain access to markets — such as the EU — which have committed to importing sustainably produced palm oil. And because large companies and the government plan to offer financial and technical support to small farmers to help transition to sustainable production, this approach eases the burden of certification for farmers. However, there are also risks to the jurisdictional approach. Involving the government makes the process more vulnerable to increased volatility as administrations eventually turn over. Moreover, the move to regional certification could lead to standards being lowered so that all producers in a region can meet them. As a result, certification could carry less weight even as it becomes more common.

With uncertainty about the results of the country’s efforts to transition to jurisdictional certification, Ecuador’s palm oil market may continue to be a driver of deforestation for the foreseeable future. Moreover, the country is seeking to double its production and triple its exports by 2025, according to PROAmazonía, triggering challenges to reach its goal of being deforestation free in the Amazon region. As a result of growth in the palm oil industry, international firms buying Ecuadorean palm oil could continue to see deforestation risks.