On Monday, December 7, 2015, Chicago Mercantile Exchange Inc. (CME) delisted the U.S. Dollar Cash Settled Crude Palm Oil (CPO) Futures contract (“Contract”) identified in the table below. There was no open interest in the Contract. The contract is now delisted both from CME Globex and CME ClearPort.

RSPO launched its stricter palm oil label called RSPO NEXT. Palm oil growers who exceed the association’s minimum standards on environmental and social responsibility can brand their products RSPO Next. NGO opinion about RSPO Next is divided. Some NGOs such as Greenpeace and Forest Heroes are critical for RSPO Next not meeting consumer demand for products that support the over 300 zero-deforestation corporate commitments. Other NGOs such as Oxfam Novib are more circumspect suggesting that RSPO Next may lead to broader sectoral change.

Almost 8 million Indonesian consumers are ready to support and shift to sustainable palm oil products, according to a pioneering market survey commissioned by the Roundtable of Sustainable Palm Oil (RSPO), and carried out by TNS and Daemeter Consulting in 2015.

Astra Agro Lestari, considered one of Indonesia’s most politically influential companies, joined the Indonesian Palm Oil Pledge (IPOP).  This moment has been long anticipated: Astra first promised to join IPOP in June 2015 and then reiterated its commitment to do so in September 2015 when it announced its Sustainability Policy.

Malaysian Rating Corporation Berhad (MARC) confirmed that Sime Darby’s bond rating outlook on its Perpetual Sukuk as negative, consistent with the revised outlook on the ICP/IMTN to negative from stable. The negative outlook revision factors in the slower-than-expected pace of measures initiated thus far to address the substantial increase in group borrowings following the debt-funded acquisition of New Britain Palm Oil Limited (NBPOL) for RM 6.0 billion in March 2015. Some of the group’s earlier plans to pare down its debt have been postponed owing to weak market conditions. Additionally, the group’s key business segments have continued to face a tough operating environment, leading to weaker earnings and cash flow generation that have put pressure on its credit metrics. These factors notwithstanding, the affirmed ratings reflect Sime Darby’s geographical diversity of and significant market position in the oil palm plantation, property, motors and industrial segments. The group’s strong financial flexibility which also stems from its status as a government-linked corporation supports the rating affirmation.

Peat fires burned 293,065 hectares of land within concessions managed by Asia Pulp & Paper (APP) suppliers during last year’s haze crisis, an area amounting to 37 percent of its holdings in South Sumatra, finds a new analysis released by a coalition of Sumatra-based environmental groups. Of that area, 86,004 hectares was plantations, representing 26 percent of APP’s total planted area in the province.

Consumers in Singapore have begun commercial boycotts of products linked to APP. Some stores are removing its products removed from shelves and the government threatening multi-million dollar fines.

Both Norway’s pension fund and the U.S. Congress solidified gains to protect consumers from purchasing products made by forced / slave / child labor. The U.S. law would ban the import of goods produced by child or forced labor — cotton from Kazakhstan, wheat from Pakistan, lobsters from Honduras, and palm oil from Indonesia and Malaysia. The law would be federally enforced by U.S. law enforcement.

Meanwhile, Norges Bank Investment Management (NBIM), which manages the Norwegian Government Pension Fund and has funds invested in 9,000 companies in 75 countries, has stated that the responsibility to respect human rights applies to all companies. NBIM outlined its expectation that companies not only integrate their human rights policies into their operations, but that they also report on their human rights performance on a regular basis and establish grievance mechanisms for individuals and communities impacted by their operations.

For example, the Atama project – which is very large and shrouded in secrecy – may present significant ecological and financial risks.

The Atama project was announced in 2012, and would impact a huge area of swamp and forest in one of the wildest parts of the Republic of the Congo. While the plantation remains largely unplanted, the land is still seeing significant timber harvesting and habit damage.

The Atama palm oil concession in the Republic of the Congo, covering 470,000 hectares (1,815 square miles) of forest — an area larger than Rhode Island — is billed as the largest in the Congo Basin. There is no information regarding if communities were involved in granting the concession. No information is available on application of Free, Prior, and Informed Consent.

This region includes some of the highest gorilla densities on Earth, and could contain some 80,000 Critically Endangered western lowland gorillas, as well as large populations of chimpanzees and forest elephants. Bouvier’s red colobus, thought to be extinct, has also been found there.

Palm oil exports from Indonesia, including palm and kernel oils, fell 22 percent to 1.97 million metric tons from December, according to the median of 10 estimates from analysts, planters and industry officials. That would be the steepest decline since April 2014, according to data from the Indonesian Palm Oil Association.

Dwindling supplies from the world’s largest producer pushed up palm oil futures in prices inKuala Lumpur to a 20-month high. Palm oil prices have increased about 40% from a six-year low in August on concern the strongest El Nino in almost two decades will hurt production and shrink inventories.

Also, palm oil inventories in Malaysia fell to the lowest in six months in January as El Nino-wrought dry weather exacerbated seasonally low production in the world’s second-largest grower. Inventories fell 12 percent to 2.31 million tons last month, data from the Malaysian Palm Oil Board demonstrated. The median estimate in a Bloomberg survey forecast stockpiles of 2.33 million tons. Crude palm oil production slid a steeper-than-expected 19 percent to 1.13 million tons, the lowest for January since 2011. Cargo surveyor Intertek Testing Services figures showed a 23 percent slump in the first 10 days of February to 249,835 tons compared to the same period in January. Imports dropped 57 percent to 36,642 tons in January, according to MPOB data. Malaysia said last week it will scrap the temporary slowdown on imports announced in October.

Imports of the cooking oil produced by crushing soybeans will jump to more than 4 million metric tons in 2016 through October, said B.V. Mehta, executive director of Solvent Extractors’ Association of India, doubling imports primarily from from Argentina, Brazil and the U.S.

India’s increasing preference for soybean oil may damp efforts by palm oil’s top producers Indonesia and Malaysia to trim stockpiles as a crash in crude oil prices weakens demand for the vegetable oil as a biofuel. An expanding population and rising incomes are boosting consumption of cooking oils in India, where demand is set to surge as much as 75 percent to 35 million tons by 2025, the association estimates. The country meets more than half its cooking oil requirements through imports.

In June of 2014 Friends of the Earth Europe and Friends of the Earth the Netherlands brought a alleged breach of the OECD Guidelines for Multinational Enterprises by the Dutch bank Rabobank to the attention of the Dutch National Contact Point (NCP). The NCPs are agencies located in 45 countries set up by OECD governments to provide a mediation and conciliation platform between multinationals on the one hand and civil society and other stakeholders on the other hand, for resolving practical issues that may arise with the implementation of the OECD Guidelines.

The alleged breach concerned an investment by Rabobank in Bumitama Agri Group, a palm oil company that managed on behalf of its owner a plantation company known as PT Gemilang Makmur Subur. In the same year CRR published a comprehensive risk analyses on Bumitama Agri Group also noting the purchase of oil palm fruits from this particular plantation that its previous owner (VS Industries Bhd.) had developed in Production Forest without Ministry of Forestry approval. Rabobank showed willingness to continue the NCP brokered dialogue. The NCP appreciated Rabobank’s good intention to enter into dialogues on improving its palm oil policy and addressing wider issues in the palm oil industry. Meanwhile, the NCP noted FoE’s advocacy to promote the small-scale production of sustainable palm oil.

The final statement from the NCP was published on January 15, 2016. In it, some potential improvements have been put forward in how multinationals, and in particular financial institutions, should approach oil palm industries. These include:

NCP offers further facilitation for dialogues between FoE and Rabobank. The evaluation of these dialogues is scheduled at the end of 2017.

Meanwhile, the Friends of the Earth-Rabobank discourse has resulted in meaningful change:

Satellite image of the formerly contested PT GMS plantation area and the proposed forest corridor which was severely affected by the 2015 fires. 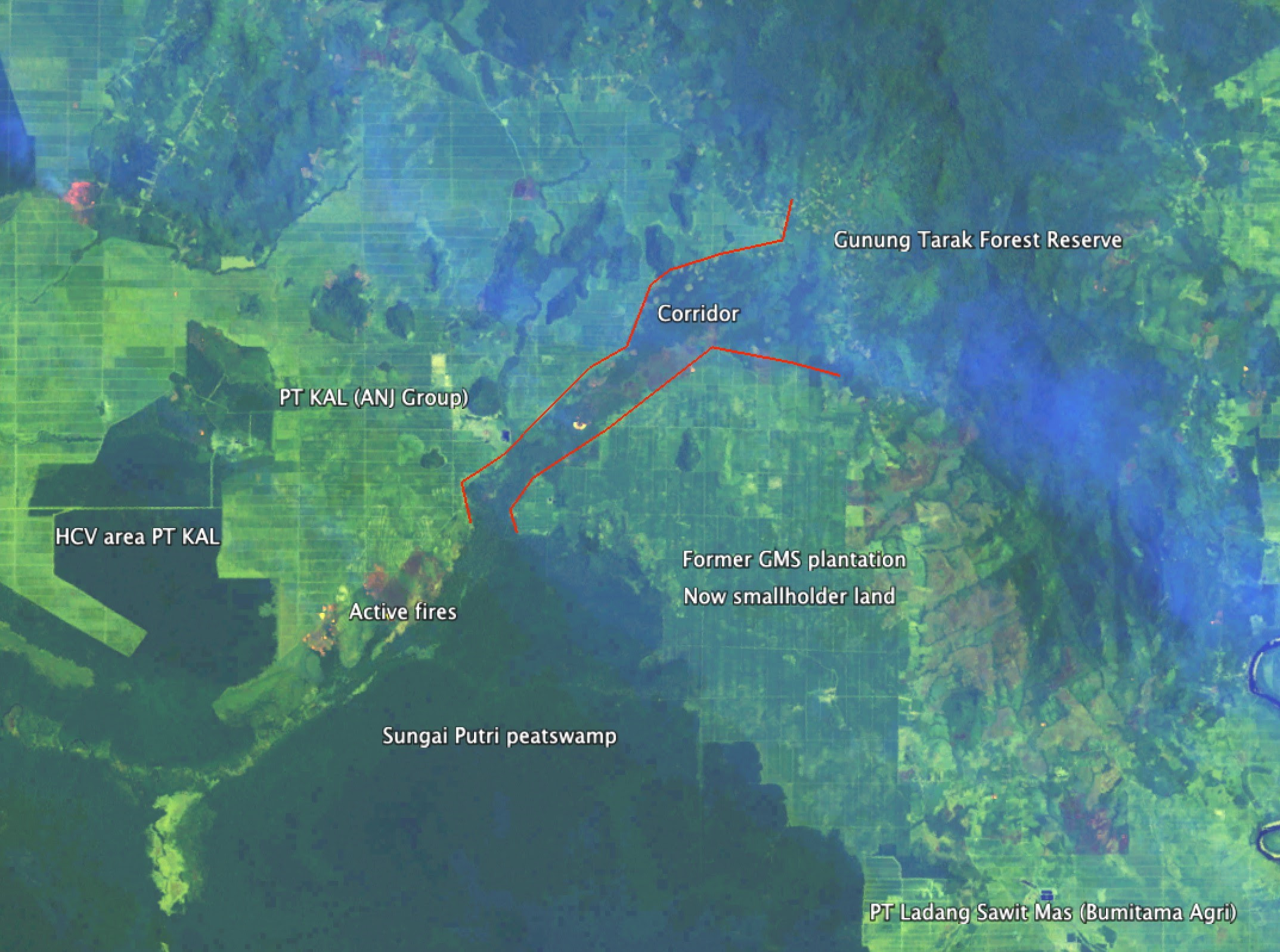