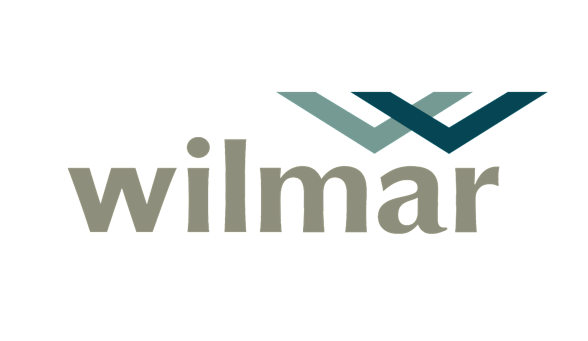 On November 9, the U.S. Department of Commerce announced final countervailing duties on imported biodiesel from Indonesia and Argentina. Countervailing duties (CVD) are an import duty imposed by countries when another country exports products that allegedly are subsidized by the exporting country. This CVD decision impacts two Indonesian palm oil biodiesel exporters that import into the U.S.: Wilmar International, which trades on the Singapore Exchange, and Musim Mas, which is privately held.

As shown in Figure 1 (below), the CVD ruling is one of three ongoing investigations. The other two are the Department of Commerce Antidumping (AD) investigation and the U.S. International Trade Commission (ITC) Injury Investigation

Figure 1 shows key upcoming dates for these three investigations. Some of these dates may change. A key consideration is that if the ITC votes against either country during the final injury phase, the overall process stops.

Wilmar’s biodiesel sales to the U.S. are small compared to the overall firm’s sales. These decisions may marginally impact Wilmar, which is also dealing with the effects of Indonesia’s recent decision to decrease the quota of biodiesel to be sold in Indonesia’s domestic market. For context, Wilmar’s Q3 2017 earnings, announced two weeks ago, fell 16 percent year-over-year with tropical oils profit before taxes down 51 percent year-over-year. Its Q3 2017 crude palm oil sales, which include biodiesel sales, were 2.9 percent lower at 5,749,000 metric tons compared to Q3 2016 5,919,000 metric tons.

The New CVD Duties on Biofuels Imports from Argentina and Indonesia

After conducting an investigation since March 2017 that focused primarily on calendar year 2016, Commerce stated that “biodiesel from Indonesia is being, or is likely to be, sold in the United States at less-than-fair-value (LTFV).” A key factor in Commerce’s decision is the Government of Indonesia’s mandatory prices paid to suppliers and sales quotas it sets for Indonesia’s domestic biodiesel market. Commerce found that this Indonesian program – the Public Service Obligation (PSO) program – pushes Wilmar’s and Musim Mas’ raw material crude palm oil (CPO) costs in Indonesia below global CPO prices, creating an unfair advantage for when these two companies import biodiesel palm oil into the U.S.

PT Wilmar Bioenergi Indonesia is the only Wilmar subsidiary that produces the specific biodiesel sold in the U.S. that is qualified under the U.S. Renewable Fuel Standard. Wilmar’s wholly owned subsidiary – Wilmar Oleo North America – imports this biodiesel and sells it to U.S. buyers such as Shell and Noble Energy – which is a wholly owned subsidiary of Noble Group, which trades on the Singapore Exchange – among others.

As shown in Figure 2 (below), Commerce’s final CVD rates for palm oil biodiesel from Indonesia were set at 34.5 percent to 64.7 percent. These rates are below the initial proposed range of 41.1 percent to 68.3 percent in August. Wilmar’s CVD rate is set at 34.5 percent while Musim Mas’ CVD rate is set at 64.7 percent. Figure 2 also shows the CVD for soy-based biodiesel exports from Argentina to the US.

The ITC is typically more transparent than the Department of Commerce CVD and AD. While the ITC is staffed with commissioners from both political parties, the Department of Commerce reflects the current administration’s direction. The ITC is tasked with deciding if there was, or will be, material injury caused by imported biodiesel into the U.S. domestic market. The case was filed against Argentina and Indonesia.

The U.S. CVD law provides U.S. businesses and workers with a transparent, quasi-judicial and

internationally accepted mechanism to seek relief from the market-distorting impacts caused by unfair subsidization of imports into the United States. This process establishes an opportunity to compete on a level playing field. If the ITC investigation finds material injury to domestic producers, the Department of Commerce will instruct U.S. Customs and Border Protection (CBP) to require cash deposits based on these new CVD rates for all Argentinian and Indonesian-impacted biodiesel imports. If the ITC finds there is no material injury from either of the countries, then the investigation against that specific country (or both) would cease.

The CVD investigation sought to determine that Indonesia subsidized its exports. For example, in Wilmar’s initial 41.1 percent CVD, 25 of those percentage points were attributable to the prices and quotas set through PSO program.

The 25 percentage points comes from the following:

The remaining 16 percentage points that makes up the original CVD comes from a Department of Commerce calculation that includes global palm oil prices such from the Malaysian Palm Oil Board and Rotterdam.

The AD investigation analyzes if biodiesel imports are being sold at prices below those in the home markets, or below the cost of production. The petitioners’ goal is to enable the Department of Commerce to decide in their favor. Wilmar contends that in this case, Commerce “preliminarily used profit data from biodiesel producers in Thailand and Germany, which have different price structures and economics, to calculate the alleged level of dumping.”

This decision could have consequences across the sector. As shown in Figure 4 (below), Argentinian and Indonesia biodiesel account for much of the biodiesel imported into the United States. Other significant biodiesel exporters to the U.S. include Canada, Germany and South Korea, although the biodiesel from these three biodiesel exporters is not palm oil based. Domestically, Archer Daniels Midland (ADM), who owns 24.9 percent of Wilmar International, is a key producer of biofuels, ADM may benefit from the imported duty leveled against Wilmar. Juan Ricardo Luciano – Chairman, President, and CEO for ADM – also sits on the Board of Wilmar. 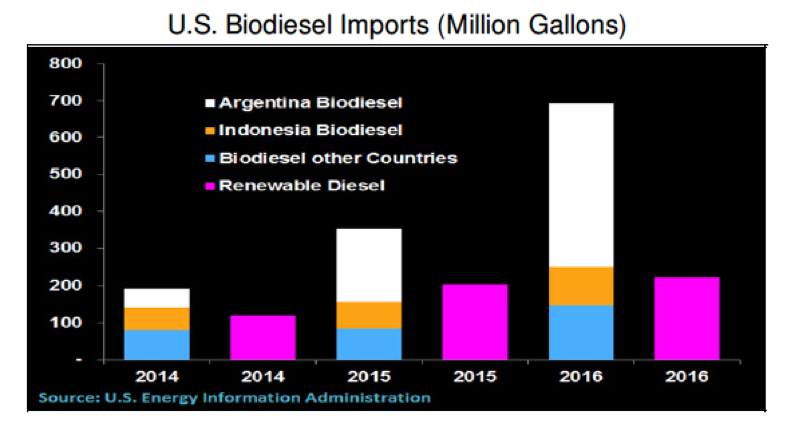 Neste Corporation’s exports from Singapore into U.S. markets of its renewable hydrotreated diesel could also increase because of the levies imposed on both Argentinean and Indonesian biodiesel imports into U.S. markets. According to Bloomberg (paywall), Neste’s exports could become cost competitive with Wilmar’s palm oil biodiesel. Neste’s renewable diesel product – NEXBTL – is in a different product category than palm oil-based biodiesel in the U.S. because it is based on ten different feedstocks. NEXBTL also functions differently given that it can be used in cold weather because its cloud point is much lower than palm oil biodiesel. NEXBTL trades commercially under the name Neste My Renewable Diesel. Neste MY Renewable Diesel is available for consumers in California through their distributor partners: IPC, Van De Pol, Western States Oil, and Ramos.

Palm oil biodiesel from Indonesia does not meet the U.S. Government’s Renewable Fuel Standards program’s minimum greenhouse gas reduction criteria. This is because its emissions reduction is only 17 percent less than its petro-diesel baseline competitor. The U.S. Government’s threshold is 20 percent less emissions than petro-diesel. This means that palm oil biodiesel generates the lower priced category Renewable Identification Numbers (RINs) when imported into the U.S., resulting in less revenue for Wilmar and Musim Mas.

Furthermore, imported palm oil biodiesel generates the lower value biodiesel RINs than the higher valued biomass-based fuels RINs. To generate the RINs, Wilmar must demonstrate both traceability of its palm oil supply chain of palm oil and grandfathering of its production facility.

Any feedstock that originates outside of the US and Canada needs to comply with the EPA definition of renewable biomass, which means it must come from lands under cultivation prior to December 19, 2007.

Wilmar uses Control Union on the ground in Indonesia to audit its tracing, tracking and segregation. In the U.S., Wilmar hires the accounting firm Weaver to verify that its palm oil biodiesel qualifies under the EPA policy, and that its palm oil biodiesel was segregated at each step in the supply chain. Weaver conducts the audit in accordance with the EPA Quality Assurance Plan guidelines and provides a certification.

For shipments of palm biodiesel produced by Wilmar’s EPA registered facility, PT Wilmar Bioenergi Indonesia, and imported into the USA during 2016, Wilmar provided chain of custody documentation related to the palm fresh fruit bunches and associated palm oil. This chain of custody documentation is reviewed by Control Union Indonesia, and Weaver and Tidwell LLP as part of Weaver’s EPA-approved Quality Assurance Plan.

Bloomberg analysis (paywall) suggests that biodiesel import duties could double the cost of imported Indonesian and Argentinean biodiesel imports, increasing the costs of these deforestation-related products to end consumers.

Starting in January 1, 2017, Wilmar’s palm oil biodiesel imports into the U.S. went to zero due to the expiration of the U.S. Internal Revenue Service’s USD 1 per gallon Blenders Tax Credit. This is true as well for Argentina imports since August 2017 due to the imposition of punitive CVD duties. This may benefit competitors with different products – such as Neste’s renewable hydrotreated diesel. Most of Neste’s hydrotreated diesel is sold into the California market because of the Low Carbon Fuel Standard credit value available in California. The Low Carbon Fuel Standard credits allow hydrotreated diesel to be cost competitive because it is more expensive to produce than biodiesel. With Neste now working with American Airlines to determine if Neste’ High Freeze Point HEFA renewable jet fuel can be used by American Airlines as a renewable hydrotreated biodiesel, the pressure is on Wilmar to manage its U.S. market presence.