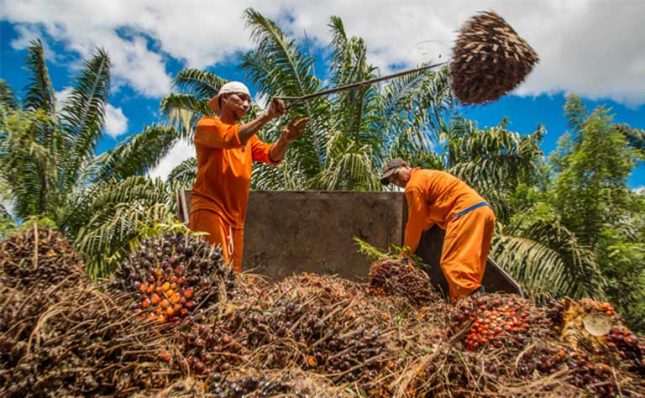 Agropalma SA, the largest exporter of palm oil in Brazil, is facing legal and reputational risks from being ordered to pay a fine due to poor working conditions on two farms in Tailândia, which is in northeast Pará.

The Labor Court of Tucuruí (also located in Pará) ordered the company to pay just under 1 million reals (195,000 USD)  for irregularities discovered during inspections by government officials in the Public Ministry of Labor PA/AP (MPT). They found that the company did not comply with health, hygiene, and safety standards on the two farms. In addition to the fine, Agropalma was also ordered to build shelters for workers to utilize during bad weather or while eating meals, and sanitize its facilities and provide fresh water for workers. Agropalma had claimed that it was following its commitments under 2009 a Conduct Adjustment Term (TAC), but the inspections said that workers ate their meals in the field because they were a long distance from a cafeteria, and they also did not have access to water or sanitary facilities.

Agropalma has appealed the ruling. The company asserts that it “has been complying with the determinations of labor legislation and providing adequate conditions for the exercise of work.” It added: “In view of this scenario, and certain of the fulfillment of the obligations that are legally required, the company appealed against the decision.”

Agropalma is also seeing conflicts with local communities. Residents of upper Acara River say that the company has intimidated local communities with security guards and employees threatening them with violence as they attempt to retake the territory that they believe is theirs. The local communities say that they were expelled from their territory in the 1980s and have the right to retake it. One report says that the Nossa Senhora da Batalha and Santo Antonio communities were historically located on Agropalam farms. Agropalma, in response to the events, said: “Agropalma does not prevent the movement of local communities through the servitude areas that are included in their possessions and properties. Unfortunately, a group of people took advantage of this to enter an area that is not servitude and declared that they were establishing housing in the place claiming ownership of the land – even though they did not present any documentation, judicial or administrative decision recognizing this alleged right.” Local officials are currently monitoring the situation.

The company’s reputation could take hits from recent developments as scrutiny of the Brazilian palm oil industry has risen in recent years amid its significant growth and links to deforestation. Agropalma has been able to maintain a relatively positive reputation as deforestation on its farms has been negligible since 2008, according to a CRR report. Agropalma is a wholly-owned subsidiary of the Alfa Group, a conglomerate with business segments in finance, hotels, retail, and construction, and it is the only Brazilian palm oil producer selling palm oil certified by the Roundtable on Sustainable Palm Oil (RSPO). The entire Agrogalma Group, including its refineries and other downstream operations, is certified under the RSPO. In 2020, the company sold 50 percent of its crude palm oil as RSPO-certified and 44 percent of its palm kernel oil. In 2012, Agropalma ranked first on Greenpeace’s palm oil scorecard for its efforts on forest and peatland protection and for certifying half of its palm oil under the RSPO label.

Even though Agropalma has, for the most part, avoided significant ties to deforestation, it has seen criticism in the past for its poor working and labor conditions on the company’s palm oil plantations. Several reports have documented Agropalma’s conditions. Agropalma has been linked to slave labor in the past, with a well-known case of an Agropalma outgrower, Altino Coelho de Miranda, appearing on a 2013-2015 blacklist for slave labor.

These legal and reputation risks that Agropalma – and other Brazilian palm oil companies – face could bring about problems for financiers, investors, and FMCGs that purchase from these companies. Moreover, current and upcoming EU regulation on sustainable financing and supply chain due diligence, which could be of particular interest to Agropalma because of its high export levels, may force companies and their financiers to become more selective or see growing financial and legal risks. Agropalma is exporting 15 percent of its production, mainly to Europe. A large number of traders, oleochemical companies, and FMCGs are sourcing from Agropalma, including AAK, Bunge, Cargill, General Mills, Hershey, Mondelez, Nestlé, Unilever, Upfield, Kellogg’s, and Grupo Bimbo. These companies and their financiers may face reputation risks from their connections to Agropalma.

« The Chain: Deforestation Driven by Oil Palm Falls to a Four-Year Low The Chain: Investors Back Proposed Laws in the United States That Aim to Reduce Deforestation in Commodity Supply Chains »