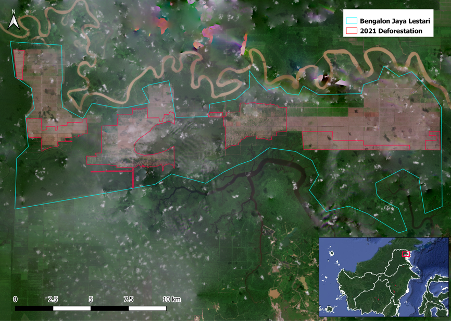 The Chain: Deforestation Driven by Oil Palm Falls to a Four-Year Low

Deforestation in Indonesia, Malaysia, and Papua New Guinea attributed to the development of oil palm plantations has fallen to its lowest level since 2017. In 2021, 19,000 hectares (ha) of forest and peat were cleared for oil palm plantation development. In 2018, the amount of land cleared increased to 74,000 ha, and in 2019, the figure rose to 90,000 ha before falling drastically in 2020, when 38,000 ha were detected. In 2020, approximately 22,000 ha could be attributed to just 10 companies. Last year, the 10 largest deforesters cleared approximately 8,000 ha, or 42 percent of total deforestation

CRR has previously attributed the decline in deforestation in 2020 to, in part, Indonesia’s economic contraction and COVID-19 travel restrictions, arguing that domestic demand and rallying palm oil prices would lead to increased land development in 2021. This, however, did not materialize. Although Indonesia’s economy grew in 2021, COVID-19 restrictions remained throughout much of 2021 and strengthened at the end of the year as the Omicron variant spread globally. These developments may have contributed to the continued decline in deforestation.

Another feature of note is the continued limited amount of deforestation by companies that are linked to international supply chains covered by No Deforestation, No Peat, No Exploitation (NDPE) policies. None of the 10 largest deforesters in 2021 can be conclusively linked to the NDPE market. Two have links via Fresh Fruit Bunch supplies and minority shares in a mill. 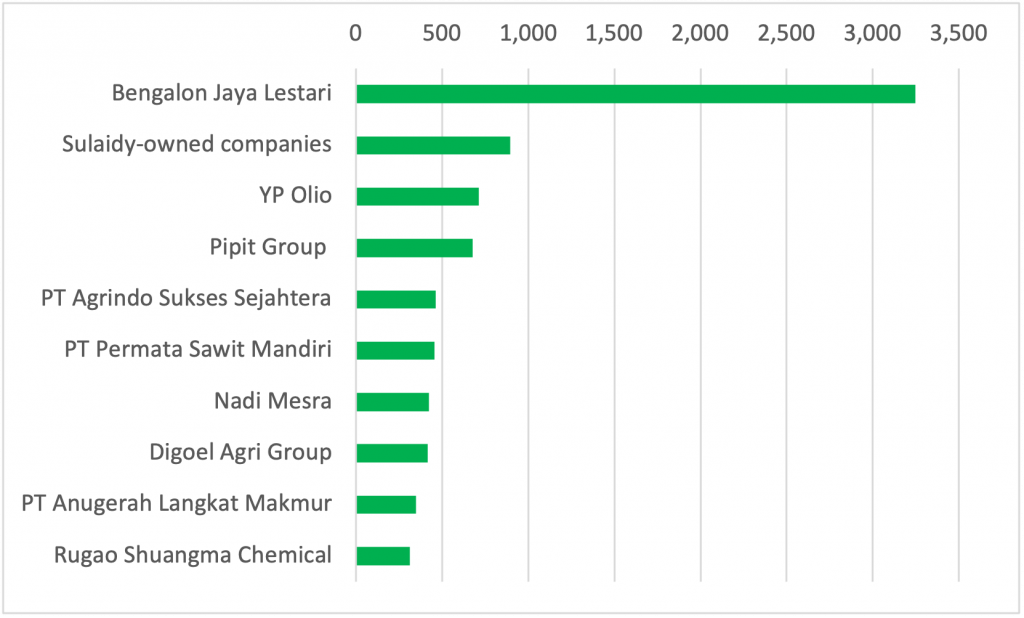 See our webinar reviewing the results of this research and the changing context of deforestation in Indonesia below:

Bengalon Jaya Lestari has appeared in the top deforesters list since 2020. In 2021, around 3,200 ha of deforestation were detected on two of its oil palm concessions in North Kalimantan, PT Kartika Nugraha Sakti and PT Wana Jaya Abadi. Information obtained from Indonesian notary acts show that the group company belongs to Cindra Darmanto, Iskandar Riyanto, and Candra Gunawan. There is no public information about these owners, and they are not known to own any mills, either individually or collectively. Due to the lack of information, Bengalon Jaya Lestari cannot be linked to any supply chains.

YP Oilio, a Malaysian group, operates plantations in Pahang, Peninsular Malaysia and is tightly tied to Pahang Royal family, which holds half of the company’s shares.

The group was among the top deforesters during the first half of 2021. During all of 2021, YP Oilio cleared 700 ha of forest, with most cleared during the first half of the year. Its plantation covers a total area of 8,500 ha. The plantation’s location was once part of Bukit Ibam Forest Reserve, which was degazetted in November 2020. As YP Oilio does not appear to own any mills, links to NDPE supply chains are unknown. 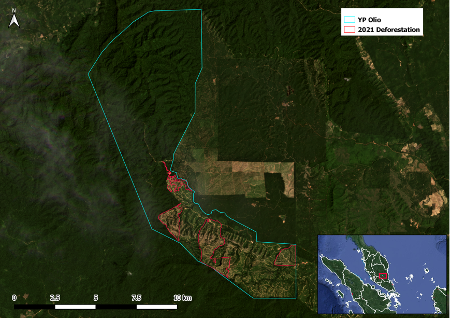 In 2021, PT Pipit Citra Perdana, an oil palm plantation company in North Kalimantan, cleared almost 700 ha. PT Pipit Citra Perdana is part of Pipit Group, a company owned by Kristianto Kandi Saputro and family. There is no public information about this group, except references to Kristianto Kandi Saputro being the owner of a coal mining company, PT Pipit Mutiara Jaya. A Pipit Group website, which appears to be inactive, has mentioned other business lines that the company is involved in, including engineering, logistic, mining, and palm oil companies.

CRR analysis puts two plantation companies under Pipit Group: PT Pipit Citra Perdana and PT Nunukan Bara Sukses. Both are located in North Kalimantan. PT Nunukan Bara Sukses is known to have a palm oil mill that recently became operational. The link to NDPE supply chains is unknown as the mill does not appear in any public lists. 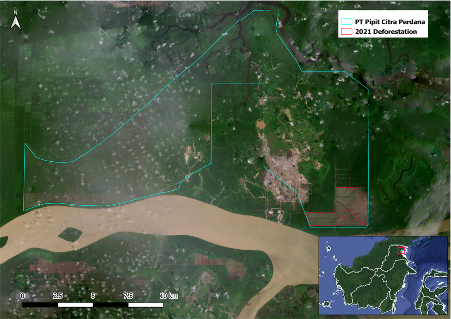 PT Agrindo Sukses Sejahtera first appeared in the top deforesters list in the first half of 2021. CRR detected 460 ha of forest clearing within PT Agrindo Sukses Sejahtera’s concession in 2021, with just 100 ha detected during the last half of the year. The company is owned by Agus Suparmanto, who was Indonesia’s Minister of Trade between 2019 and 2020. There is very little public information about the company, and there are no known supply chain links.

PT Permata Sawit Mandiri is considered one of Indonesia’s most notorious companies. Once operated by the Malaysian company Genting Plantations, it has changed hands several times over the years and is now owned by an individual known only as Ikhsanudin.

In 2021, PT Permata Sawit Mandiri cleared around 450 ha of forest, a reduction from the 2,000 ha detected in 2020. The company’s deforestation has occurred in the habitat of the critically endangered Bornean orangutan. Analysis by CRR member Aidenvironment found that the concession has approximately 6,500 ha of orangutan habitat remaining, which holds approximately 30 orangutans. A press release from Indonesia’s Ministry of Environment and Forestry in 2017 mentioned collaboration between the government and the company to manage High Conservation Value areas, but there is little information about any programs.

In the seventh position is Malaysian palm oil company Nadi Mesra, whose plantation is in Johor, Peninsular Malaysia. In 2021, approximately 420 ha were cleared within the company’s concession. The concession was once part of the highly biodiverse Tenggaroh Permanent Reserve Forest, which was degazetted in 2015. The business permit covers a total area of 5,000 ha. Nadi Mesra does not appear to have a palm oil mill, so there are no known links to NDPE supply chains.

Digoel Agri Group is a part of Tanah Merah project, a block of concessions in Indonesian Papua that is now operated by Digoel Agri Group, which was once owned by HSA Group/Pacific Inter-Link. In 2021, the group company cleared 415 ha of land in its two concessions in Papua, PT Manunggal Sukses Mandiri and PT Trimegah Karya Utama. The group’s total deforestation is a slight increase from the 400 ha detected in the first half of 2021.

Digoel Agri is owned by a New Zealand property developer. The company has a history of conducting land clearing without consent from local indigenous people. In a response letter to a journalist highlighting the company’s deforestation, Digoel Agri said that it would start identifying High Conservation Value and High Carbon Stock areas before clearing and develop a recovery plan that protects and assists forests and local communities. There is no known information about Digoel Agri’s conservation or recovery activities. Digoel Agri cannot be linked to NDPE supply chains as the group does not appear to operate a palm oil mill.

PT Anugerah Langkat Makmur did not appear on the top deforesters list for the first half of 2021, but, by the end of 2021, the company had cleared forest around 350 ha on its concession in North Sumatra. In 2019, the company was accused of violating government regulations by converting protected forest into oil palm plantation.

According to the company’s notary act, the owner of this company is the late Haji Anif, a Sumatran businessman and the father of North Sumatra’s current vice governor, Musa Rajekshah. The vice governor was formerly the director of PT Anugerah Langkat Makmur.

Rugao Shuangma Chemical, a Chinese chemical company that produces fatty acids, operates two oil palm plantations in North Kalimantan, PT Palem Segar Lestari and PT Sebaung Sawit Plantation. The company has appeared in the top deforesters list since 2019. In 2021, 300 ha of forest were cleared on the two concessions. PT Sebaung Sawit Plantation is now also operating a palm oil mill, but it does not appear in any NDPE supply chains. Little is known about Rugao Shuangma Chemical, except that the company appears to sell stearic acid under the brand “Duanma.”