Analysis by Chain Reaction Research (CRR) shows that ten palm oil companies were alone responsible for approximately 39,500 hectares (ha) of deforestation and peat development in Indonesia, Sarawak (Malaysia) and Papua New Guinea in 2019. This total amounts to roughly 44 percent of all deforestation detected within known oil palm concessions in these regions last year (90,000 ha). This figure is considerably higher than the 74,000 ha detected in 2018. However, this total does not include land that was burnt during the dry season in 2019, which saw substantially more forest and peat lost.

Determining the reason for fluctuations in deforestation figures is challenging. Although signs point to demand for crude palm oil (CPO) exceeding production levels in 2020, the palm oil price has remained relatively stable. Political pressure on plantation developers in 2018 to not cause reputational damage to Indonesia during the Asia Games continued in 2019, as Indonesia again faced criticism from neighbouring countries over haze from land development. The government moratorium on new permits for plantations within forests and peat areas was also made permanent in 2019. 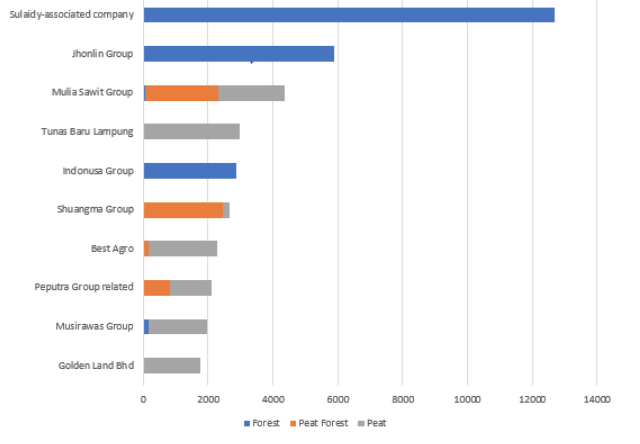 The largest deforester in 2019 was the same company that occupied the top position in 2018. Mr. Sulaidy is an Indonesian businessman who owns eight concessions in Kalimantan. These concessions cleared around 12,700 ha in 2019, with PT Borneo Citra Persada Abadi in West Kutai, East Kalimantan seeing the largest deforestation, at 4,600 ha. Little is known about Mr. Sulaidy. Since he does not appear to own any mills, it is likely any fresh fruit bunches already growing on his concessions are sent to third-party mills. Due to the lack of verifiable information, it is therefore not possible to link Sulaidy to any NDPE supply chains that publish their supplying mills. 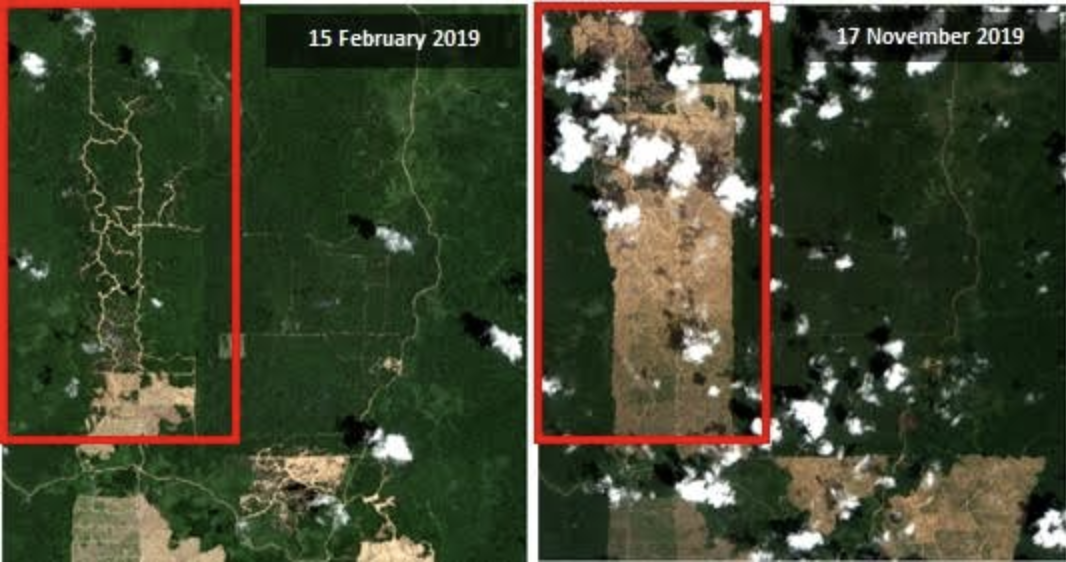 One issue that has proved difficult for NDPE companies engaging with the company is that Jhonlin’s PT Kodeco Timber, which cleared 5,300 ha of forest in 2019, is officially under a Business Permit for the Utilization of Timber Forest Products in Natural Forests (IUPHHK-HA). This permit is not the type needed for oil palm plantation development. However, satellite imagery indicates oil palm is being planted, as do local media reports. If the plantation is being used for only timber harvesting, it would fall outside of the scope of NDPE policies.

Media articles have linked Jhonlin Group to the death of a journalist investigating the company, along with the unexplained murder of two security guards on their PT Jhonlin Agro Mandiri concession in East Kalimantan. Coupled with the perceived social and political power of Haji Isam, Jhonlin Group has been a difficult company for industry stakeholders to monitor.

The third-largest deforester was Mulia Sawit Group, which has five plantations in Central Kalimantan that collectively cleared close to 4,300 ha last year. Products from these plantations appear in the supply chains of numerous traders and consumer goods companies such as ADM, Avon, Danone, General Mills, IFFCO, Kellogg’s, Mondelez, Nestlé, PepsiCo, PZ Cussons, and Unilever. Mulia Sawit was the seventh-largest deforester of 2018.

Tunas Baru Lampung was the eighth largest deforester in 2018 and moved up to fourth in 2019, clearing a total of 2,900 ha. Tunas Baru Lampung, which is publicly listed, is part of the Sungai Budi Group, whose majority owner is the Widarto Oey family. All of Tunas Baru Lampung’s clearing occurred in peatland on PT Samora Usaha Jaya in South Sumatra.

The fifth-biggest deforester was Indonusa, which is owned by Rosna Tjuatja, an Indonesian national who now resides in Singapore. Indonesia has three plantations and one mill in Sumatra. One of its concessions, PT Internusa Jaya Sejahtera, is located in Merauke, Papua and cleared approximately 2,800 ha of forest last year. Despite the company not being an RSPO member or NDPE compliant, its product appears in the supply chains of ADM, IFFCO, Avon, Unilever, Danone, and L’Oreal.

Rugao Shuangma Group cleared around 2,460 ha of peat and peat forest in 2019. Deforestation occurred on PT Palem Segar Lestari and PT Sebaung Sawit Plantation in North Kalimantan, the only two concessions the company is known to have. Rugao Shuangma Group does not appear to have a mill, so it cannot be linked to any supply chains.

Founded in 1996, Rugao Shuangma Group is a Chinese manufacturer that specializes in the development, production and trade of fatty acids and derivatives. Relatively little is known about the company or its owners.

BEST Agro cleared almost 2,300 ha in 2019. BEST Agro is an Indonesian grower and refiner owned by Rendra Tjajadi and Winarno Tjajadi. There are six operating mills and twelve estates under the parent company. Deforestation by BEST Agro subsidiaries has received widespread media coverage in the past, and the company no longer appears in the supply chains of any companies with NDPE policies.

The ownership of the concessions belonging to Peputra is complicated since they are divided between multiple members of the same family. Although the same family members have collective majority ownership of all three concessions, Peputra stated to NDPE companies that have engaged that the concessions should be viewed as stand-alone companies and not part of a group. This approach, which CRR have referred to previously as shadow companies, presents a challenge to NDPE compliance. While there may be legitimate reasons for ownership to be separated among different entities or individuals, growers may use this strategy to continue to enjoy access to the NDPE market while actively deforesting at the same time.

The tenth company on the list is Golden Land Bhd, a Malaysian company with eight plantations spread out in Indonesia (Kalimantan) and Malaysia (Sabah). Golden Land Bhd is accountable for 1,700 ha of forests and peat loss on their PT Tasnida Agro Lestari in South Kalimantan in 2019. Golden Land cannot be linked to any NDPE supply chain.

10 Responses to The Chain: Repeat Offenders Continue to Clear Forests for Oil Palm in Southeast Asia