The Chain: Detected Deforestation Within Oil Palm Concessions Has Decreased So Far in 2020

For the first six months of 2020, Chain Reaction Research (CRR) has detected a total of 19,894 hectares (ha) of deforestation within known oil palm concessions in Indonesia, Malaysia, and Papua New Guinea. Based on satellite imagery from CRR partner Aidenvironment, more than half of the total detected deforestation (57 percent) is attributed to ten palm oil group companies in Indonesia, making them jointly responsible for 11,474 ha of forest and peat loss. Five out of the ten companies have also appeared on the top-10 deforesters list for the full year 2019.

Still, the total detected deforestation for this period is considerably lower than the first six months of 2019, when approximately 40,000 ha were cleared. If deforestation within oil palm concessions in the three regions continues at this rate, total deforestation by the end of this year would be lower than 2019 (90,000 ha).

Several reasons are likely behind this year’s reduction in deforestation. The most obvious is COVID-19 and the travel restrictions that have been implemented throughout the globe, including in Indonesia and Malaysia. Indonesia’s agricultural product exports continued in the early stages of the pandemic, but more recent data from the Indonesian Oil Palm Association (Gapki) show that production and exports contracted during the first half of 2020. These declines contributed to lower crude palm oil and palm kernel oil production, down 9.2 percent year-on-year, and also led to drought and falling palm oil prices. A slowdown in Indonesia’s economy has also been a factor in travel restrictions slowing the flow of labour to rural areas.

The below figure presents the top deforesters in the first half of 2020, followed by brief explanations about each company.

Graphic 1. Top deforesters in the first half of 2020

Sulaidy-associated companies once again sit in first place, similar to 2018 and 2019. During the first six months of 2020, the group cleared 2,900 ha of forest. Mr. Sulaidy is an Indonesian businessman who owns eight concessions in Kalimantan. There is little public information about the group, and none of Sulaidy’s companies appear on the supplying mill lists of any traders and consumer goods companies with NDPE policies. 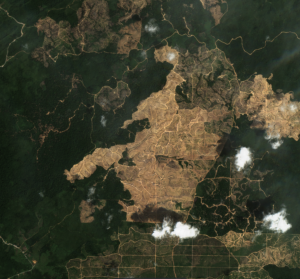 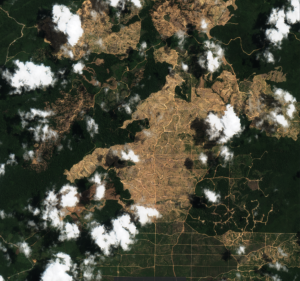 In third place is Ciliandry Anky Abadi (CAA), a group owned by the members of the Indonesian Fangiono family. The Fangiono family also owns approximately 65 percent of shares in First Resources Ltd, a palm oil developer and trader with an NDPE policy. The link between the various operations of the Fangiono family has been previously covered by CRR as part of our investigation into shadow companies and their associated NDPE risks. CAA owns nine oil palm plantations in Kalimantan, eight of which are in Central Kalimantan, with the other in East Kalimantan. The group also owns one mill in Riau (Sumatera). During the first six months of 2020, CAA cleared 1,664 ha of forest. CAA enters NDPE supply chains through Itochu Corporation, Avon, L’Oréal, and Hershey.

PT Permata Sawit Mandiri (PSM) occupies fourth place. It is owned by Mr. Ikhsanudin, and public information about him is mostly non-existent. PT PSM, an oil palm plantation company located in Ketapang, West Kalimantan, cleared 1,345 ha of forest from January to June 2020. PT PSM is not believed to own a mill. Due to the limited information about the company, CRR cannot link the group to any NDPE supply chains. However, as deforestation has continued for several years, the plantation is likely bearing fruit that it sells to nearby mills.

IndoGunta, in the fifth position for the first half of 2020, consists of a group of companies that belong to different Indonesian individuals, all of which appear to be related to the Salim Group. The Salim Group is best known for its ownership of Indofood and its subsidiaries. IndoGunta operates 20 plantations, which are scattered throughout several provinces in Kalimantan and Papua. The group, which also owns three mills in Kalimantan, cleared 709 ha of forest and peatland during the first half of 2020. IndoGunta, through its mill Gunta Samba Jaya, appears in a number of public mill lists, including AAK, Avon, Danone, General Mills, Johnson & Johnson, Kellogg’s, PepsiCo, Nestlé, and Unilever.

Bengalon Jaya Lestari is a new name on the CRR top deforester list. The company cleared 673 ha of forest and peatland during the past six months. The group appears not to have any mills, but it owns at least two oil palm plantation companies – PT Wana Jaya Abadi and PT Kartika Nugraha Sakti, both located in Nunukan, North Kalimantan. Due to the lack of verifiable information, CRR cannot link the group with any known buyers with NDPE policies.

In seventh position is Rugao Shuangma (RS) Group, which operates two oil palm plantations in North Kalimantan. Since January 2020, the group has cleared about 665 ha of forest and peatland. Founded in 1996, it is one of the biggest manufacturers of fatty acids and derivatives in China, but the group’s ownership remains unknown. The group’s subsidiaries are PT Palem Segar Lestari and PT Sebaung Sawit Plantation. RS Group does not appear in any publicly available mill lists.

Indonusa, the eighth biggest deforester of 2020, is owned by Rosna Tjuatja, an Indonesian national who currently resides in Singapore. The group is a longstanding deforester that also appeared on the 2019 list. CRR detected 638 ha of deforestation as a result of the group since the beginning of 2020, all in PT Internusa Jaya Sejahtera’s concession in Merauke, Papua. Beside its oil palm plantations business, Indonusa operates PT Hamita Utama Karsa, a mill in South Sumatra. Its products appear in the supply chains of the following companies: Itochu Corporation, Avon, Danone, Johnson & Johnson, Kellogg’s, L’Oréal, Mondeléz, PepsiCo, Unilever, Reckitt Benckiser, Nestlé, and Upfield.

Capitol Group, the ninth on the list, owns three oil palm plantations, two of which are in Manokwari, Papua and one in North Konawe, South East Sulawesi. CRR detected around 554 ha of deforestation in the group’s concessions from January to June 2020. The Capitol Group appears to be associated to Golden Agri Resources (GAR) through family ties. The grandchildren and the children of the late Eka Tjipta Widjaja (the founder of Sinarmas Group) appear to occupy key positions in the group. Celine Widjaja, the granddaughter, is the Financial Controller of Capitol Group, and the son of Eka Widjaja, Jimmy Widjaja, has been named as the CEO of Capital Group. However, no official documentation of the relationship between the Capitol Group and GAR exists, and GAR does not publicly list Capitol Group as one of its subsidiaries.

Jhonlin Group, the tenth largest deforester, has appeared on every CRR top-10 list. It cleared 535 ha of forest and peatland from January to June, including 51 ha in its PT Pradiksi Gunatama’s concession. PT Pradiksi Gunatama recently launched an IPO, in which 40 percent of the funds raised will contribute to activity for land clearing and new plantation development.

10 Responses to The Chain: Detected Deforestation Within Oil Palm Concessions Has Decreased So Far in 2020

« The Chain: Record breaking year for Brazil soy exports drives deforestation and land insecurity in the Cerrado Biome The Chain: Mixed Messages from the Brazilian Government on Deforestation Heighten Risks for Investors, Businesses »