Brazilian soy exports have risen steeply amid the COVID-19 pandemic as a result of attractive exchange rates, agribusiness expansion, US-China tensions, and efforts to mitigate the risk of supply chain uncertainties. As demand for Brazilian soy soars, agribusinesses and farmland developers are seizing the opportunity to expand in the biodiverse Cerrado biome in western Bahia, Brazil. Since Brazil mandated social isolation on March 20th, the state of Bahia approved permits for 34,307.7 hectares of development on forested lands. Of all the permits analyzed in a survey carried out by the Association of Rural Workers’ Lawyers (AATR) in Bahia, 76.7 percent authorized deforestation for agribusiness purposes and 66.55 percent applied to land within the high conservation value Matopiba region of the Cerrado biome. Despite its important role in supporting biodiversity and storing greenhouse gases, only a fifth of the original vegetation remains intact in the expansive 2 million-kilometer squared Cerrado biome.

The expansion of agribusiness in Bahia during COVID-19 is part of a broader trend in Brazil as agricultural exports in the first half of the year were up 9.7 percent over the same period last year, compared to a 20 percent drop in exports from other sectors. Brazilian soy exports to China, in particular, grew by 30 percent compared to the first half of 2019. The primary driver of the spike in Chinese demand was related to the almost 34 percent devaluation of the Brazilian Real in 2020, resulting in roughly 10 cents per bushel discount versus the United States’ soy exports. Timing also plays a role, as Brazilian soybeans are harvested between February and May, while United States soybeans are harvested between September and December. This has allowed Brazilian farmers to meet the surge in demand as China rushed to replenish its national stockpile and mitigate supply chain risks during COVID-19. Recent tensions in US-China relations during COVID-19, attractive Brazilian prices, and strong forward contracts for future production raise questions as to whether Brazil is developing lasting competitive advantage through agricultural expansion and whether quantities outlined in the January US-China Phase 1 trade deal will be upheld.

As Brazil breaks records in soybean exports and large-scale agricultural production expands to meet Chinese demand, so too does the potential for deforestation links in soy supply chains, both legal and illegal. According to a recent study, only 2 percent of farms in the Amazon and Cerrado account for an estimated 62 percent of illegal deforestation. Approximately one-fifth of soy exports from the Amazon and Cerrado to the EU were earmarked as having potential links to illegal deforestation. Such calculations exclude links to legal deforestation, like the 34,307.7 hectares approved by Bahia’s Institute of Environment and Water Resources (INEMA) this year. The heightened risk of deforestation links in Brazilian supply chains and investments, both legal and illegal, have sparked outrage in the EU and risk restricting access to financial markets and undermining the trade deal being finalized with the Mercosur group of Latin American countries. Meanwhile, the Chinese market has not shown the same level of concern around deforestation linkages and risk positioning China as a key leakage market for unsustainable soybean exports as Brazil and China strengthen trading ties: in 2020, 72 percent of Brazilian soybean exports were destined for China, up from 56 percent in 2009 and 15 percent in 2000. 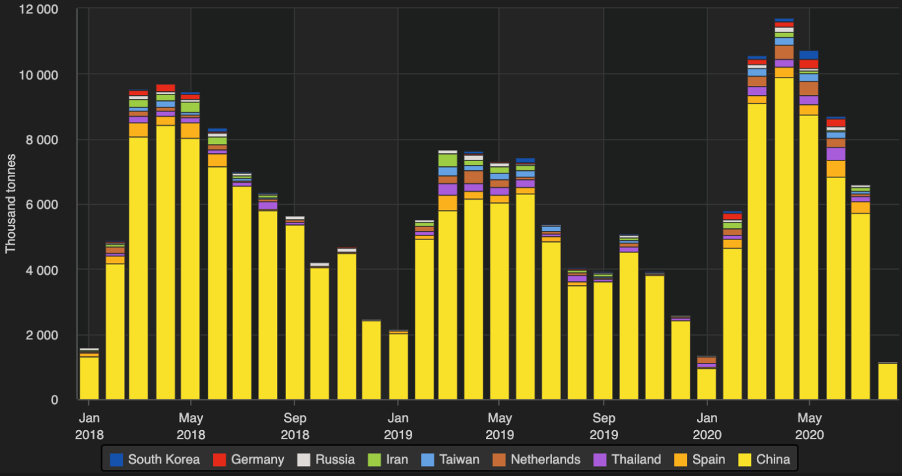 The 150 licenses, environmental authorizations, and vegetation removal authorizations granted by INEMA during this time have important implications for the traditional communities that occupy the Cerrado, especially given the health risks associated with requiring on-site environmental studies in permit applications. Although such activities were not designated as essential services, they have continued during COVID-19. Avoiding exposure has proven difficult for these communities as cases rise across Brazil, and some have opted for road closures to restrict outside access, despite potential legal ramifications.

Traditional communities, similar to indigenous groups, are recognized under Brazilian law, and their livelihoods are considered sustainable and inherently linked to their territories. However, since many live communally on government-owned land (terras devolutas) and lack legal land titles, their homes, livelihoods, and safety are often insecure. In a controversial land grabbing case in Formosa do Rio Preto, Bahia, for example, the geraizeiros communities have seen agribusiness expansion encroach upon traditional territories and restrict access to lands used for sustainable, small-scale vegetable and livestock farming, and creating artwork through weaving grasses. The geraizeiros communities primarily settled in Western Bahia over the past 200 years after fleeing conflict and drought conditions in other regions, and many descend from indigenous and Quilombo people. As armed guards, fences, and watchtowers are increasingly stationed at agribusiness facilities, Bahia has seen an uptick in violence against traditional communities. In 2018, alone, the Comissão Pastoral da Terra (CPT) reported 182 rural conflicts involving 156,000 people.

Satellite monitoring: Deforestation and fires in Bahia during COVID-19

Satellite imagery shows that deforestation has continued in Bahia during the COVID-19 pandemic. Similar to the authorizations granted for 34,307.7 hectares of deforestation, INEMA approved the clearing of 5,266 hectares of natural vegetation in Fazenda Jatobá, a BrasilAgro farm operated by Jaborandi Agrícola in Jaborandi, Bahia. According to CRR data, BrasilAgro has already cleared 790 hectares and has plans to clear all remaining vegetation within legal boundaries. 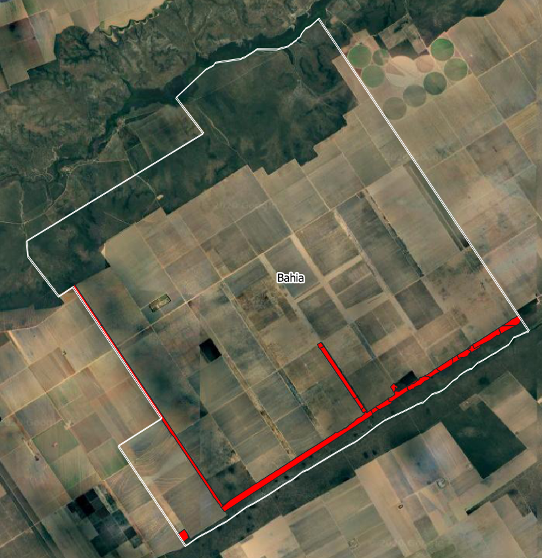 Significant deforestation has also been registered in Formosa do Rio Preto, Bahia, the second-largest soy producing municipality in Brazil. 2,167 hectares of natural Matopiba vegetation has already been cleared at JJF Holdings in the first half of 2020, as shown in Figure 1. A full history of the controversial legal developments and environmental, social, governance (ESG) issues related to JJF Holdings is available in CRR’s 2019 report. 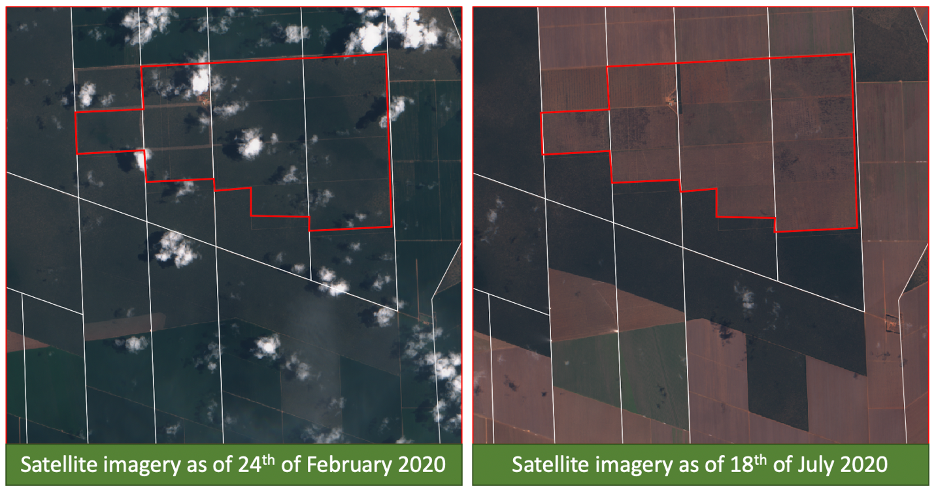 Notably, Brazil’s national space agency reported a 28 percent uptick in year over year fires in July, capturing international attention as the memory of a particularly severe 2019 fire season is still fresh. For the major soy traders operating in Formosa do Rio Preto, such as Bunge, ALZ Grãos, and Cargill, continued links to deforestation, human rights abuses, and illegal activity heighten risks related to stranded assets, market access, financing, and reputation. As legal authorizations for deforestation expand further in Bahia and pressure mounts from customers and financiers to cut links to deforestation, traders may be forced to reduce exposure to entire regions to mitigate deforestation risks in supply chains.

Correction: The units were corrected to accurately reflect the 34,307.7 hectares of deforestation approved by INEMA in Bahia during COVID-19.

5 Responses to The Chain: Record breaking year for Brazil soy exports drives deforestation and land insecurity in the Cerrado Biome

« The Chain: Nordea Divestment of JBS Sends Signal to Brazilian Meatpacking Industry The Chain: Detected Deforestation Within Oil Palm Concessions Has Decreased So Far in 2020 »