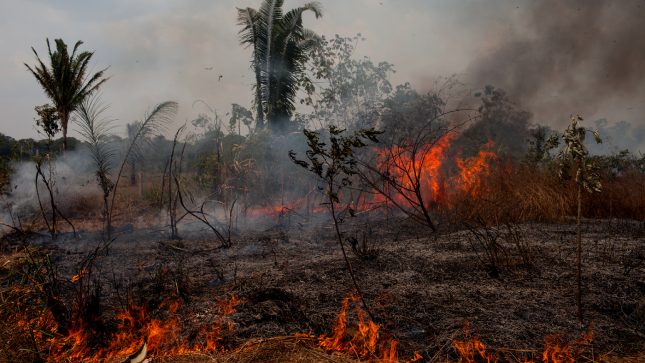 A historic 2019 fire season in Brazil came as a surprise for many and garnered the attention of the entire world. Between July and October of last year, 981,282 fire alerts were registered in Brazil, an 83 percent increase compared to 2018, as CRR showed in a recent report. In the wake of accelerating deforestation rates and reduced enforcement during COVID-19, 2020 fire season predictions in Brazil suggest even higher numbers. At the same time, the collective memory of last year’s fire season and growing international pressure to reduce deforestation have amplified global media coverage and prompted major retailers, investors, and governments to threaten boycotts, divestments, and trade disruptions if progress is not made.

Last week, 29 financial institutions with USD 3.7 trillion in assets signed a letter to the Brazilian government urging immediate action towards curbing deforestation and putting pressure on companies across agricultural supply chains. Most signatories are based in Europe, but some Asian institutions, such as Japan’s Sumitomo Mitsui Trust Asset Management, also signed the letter. The letter cited heightened risk surrounding Brazilian companies with operational links to deforestation, including reputational damage, difficulty accessing global markets, and increasing structural economic challenges that heighten sovereign bond risk. “As financial institutions, who have a fiduciary duty to act in the best long-term interests of our beneficiaries, we recognize the crucial role that tropical forests play in tackling climate change, protecting biodiversity and ensuring ecosystem services,” the letter said.

Investors are monitoring country risk and some are warning of widespread divestment if concerns are not addressed. Aviva Investors, for example, has already reduced asset exposure in Brazil. The threat of divestment also appears to extend beyond the agriculture and food processing sectors. The letter asserted that rising deforestation has led to “widespread uncertainty about the conditions for investing in or providing financial services to Brazil.” The implication is that intensified country level risk may have consequences for all Brazilian investments if financiers and customers cannot isolate and mitigate significant risk exposures related to deforestation.

The investor letter comes soon after 40 major supermarkets in the UK threatened to boycott Brazilian products if controversial legislation (PL-2633/2020) passed to legalize widespread land grabbing and deforestation of Amazon lands for agricultural purposes. Although international pressure from companies, NGOs, activists, religious leaders, and public figures likely contributed to postponing its passage, it could still move forward for a vote at any time. Similarly, 20 French companies signed an open letter to Brazilian soy traders highlighting risks of noncompliance with French due diligence legislation. Combined with the controversial Brazilian environmental policies that are already threatening the EU-Mercosur trade deal, these warnings signal that the financial implications of being linked to deforestation in the Amazon are material.

Actions taken during the 2019 fire season show that the financier and retailer threats are likely not empty. Last year, Nordea Asset Management suspended purchases of Brazilian government debt and placed existing bonds under review due to political and environmental risk. H&M also cited deforestation risk in its decision to stop sourcing Brazilian leather. With the global spotlight on the 2020 fire season, financial and political pressure to mitigate Environmental, Social, and Governance (ESG) risk is likely to further accelerate this summer as deforestation in Brazil receives international attention.

The Amazon Environmental Research Institute estimated that up to 4,500 square kilometers or 1,740 square miles have been deforested this year and prepared for clearing during fire season. This is equivalent to over six times the size of Singapore. The spread of forest fires may be exacerbated by above-average surface temperatures in the Atlantic Ocean. Research shows that the creation of an intertropical conversion zone may shift the band of moisture typically situated above the Amazon northward, resulting in drought conditions in the Amazon.

Using Pacific and Atlantic Ocean surface temperatures, the Global Fire Emissions Database predicted that the risk of severe forest fires in Amazonas and Maranhao is above average between July and October of 2020. Meanwhile Acre, Mato Grosso, Para, and Rondonia (see graphic below) face especially high risk of severe fires. Several major fires have already been detected by the Monitoring of the Andean Amazon Project (MAAP) in Mato Grasso as the season quickly approaches.

The National Institute of Space Research in Brazil has warned that clinics and hospitals likely do not have capacity to care for both COVID-19 patients and respiratory diseases related to smoke inhalation. Respiratory problems have proven especially severe in children during drought years.

It is estimated that 80 percent of deforestation in the Amazon is the result of cattle ranching. For cattle ranchers operating along the border of the Amazon rainforest, expansion of farms through deforestation has been strengthened amid reduced monitoring during COVID-19 and government rhetoric. Deforestation rates increased by 55 percent in Brazil during the first four months of 2020, compared to 2019. The process of land conversion typically begins with logging the most valuable trees, before drying and burning remaining felled trees and biomass to clear and fertilize the land for cattle pasture or agricultural production.

In 2019, fires were three times more prevalent in regions involved in beef production than the rest of the Amazon. Furthermore, an estimated 70 percent of all fire alerts tracked by NASA satellite imagery took place in buying zones for beef producers. Even beef producers seeking to limit deforestation in supply chains face challenges around opaque governance structures and what is known as “cattle laundering.” To avoid compliance requirements at meatpackers, farmers linked to deforestation, fines, and embargoes sell cattle to intermediary farms for fattening services. This extra link in the supply chain adds complexity and elevates the deforestation risk across Brazil’s beef processing sector.

Despite having sustainable sourcing policies for direct suppliers, major producers like JBS, Marfrig, and Minerva are exposed to deforestation risk through indirect suppliers. This was recently highlighted in a Reporter Brasil investigation on meatpackers. Marfrig has reported that over half of its cattle supply originates from indirect suppliers. The lack of transparency does not inherently conclude the existence of deforestation in supply chains, but it elevates ESG risks and protects the business models of illegal land grabbers. “As of today, none of the players in the industry are able to trace indirect suppliers,” said the World Bank’s financial arm, International Finance Corporation. Opaque supply chains make it difficult for companies to break links to deforestation, exposing Brazilian markets to financial and business access risks. Recent warnings from financial institutions and retailers suggest that without transparent supply chains and strong progress in deforestation risk mitigation, Brazilian companies are likely to experience negative financial impacts.

8 Responses to The Chain: Financial Risks in Brazil Rise as Fire Season Approaches and International Investors Warn of Divestment