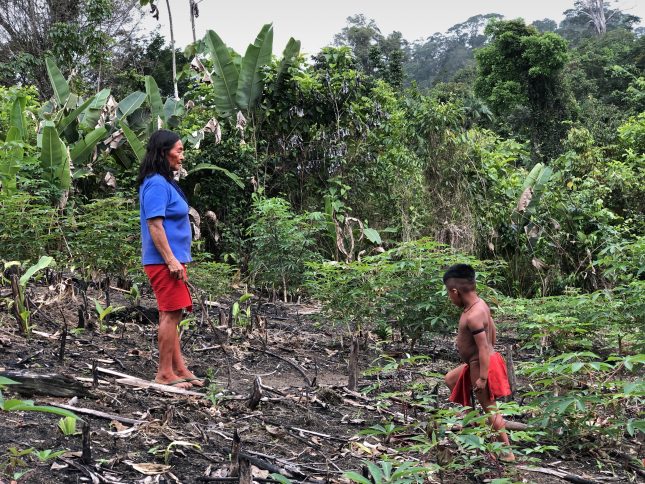 This Chain is part of a series on how COVID-19 is affecting agricultural markets and investor flows.

Many indigenous groups are now facing threats on multiple fronts: a healthcare crisis; encroachment of tribal lands; and an upcoming fire season. Remote tribes in Brazil are particularly vulnerable as illegal intrusions rise and landgrabbers are increasingly legitimized by President Jair Bolsonaro’s government. International condemnation of legislation being pursued amid the COVID-19 crisis is putting Brazil in the spotlight for its treatment of indigenous people and the Environmental, Social, Governance (ESG) risk associated with farmers, miners, and cattle ranchers claiming indigenous territories. In addition to navigating a global pandemic, indigenous people are on the frontlines of efforts to prevent deforestation, protect territorial lands, and prepare for the quickly approaching fire season.

Companies with links to deforestation are likely to face increased ESG risks related to indigenous groups, which rely on forests for their livelihoods. Although COVID-19 has temporarily diverted attention from deforestation, the impacts on indigenous tribes already facing a healthcare crisis have elevated the issue to the international stage. Celebrities, activists, international organizations, and almost 300,000 petition signatories have criticized the legalization of encroachment onto indigenous territories and underlined the urgency of protecting the health of indigenous people. Social issues have been in the spotlight during COVID-19, and companies without effective human resource and supply chain management could face heightened reputational risks as a result.

COVID-19 has reached indigenous people all over the world from the Navajo Nation in the United States to the Yanomami tribe on the border of Brazil and Venezuela. Community-based lifestyles, remote locations, and underfunded healthcare services magnify the spread and mortality of the virus in indigenous communities. This is especially true for remote indigenous tribes in the Amazon rainforest and other dense forest regions around the world. Running water and sanitizing supplies are often not available, and the closest hospital could require a multi-day journey by boat. Even then, hospitals often lack capacity. In Manaus, the capital of Amazonas in Brazil, the rate of cases per 100,000 residents reached 19.4, compared to the overall rate of 4.4 in Brazil. The Special Secretariat of Indigenous Health (SESAI) has confirmed at least 277 cases and 19 deaths in indigenous tribes in Amazonas as of mid-May. The number is likely undercounted, however, because the SESAI only includes cases and deaths in tribal villages, excluding the roughly 60 percent of indigenous people who live in urban areas.

Remote indigenous tribes have a long history of infectious diseases. For instance, four-fifths of the Panará people died from a wave of epidemics when a road was built through their land in the 1970s, which resulted in a legal case and USD 540,000 in compensation. Similar devastation has occurred as a result of exposure to loggers, farmers, colonists, missionaries, cattle ranchers, and miners. Due to high transmission rates and a history of low immunity, many indigenous groups in the Amazon rainforest have adopted a strategy of complete isolation through denying access to villages and retreating into traditional forest regions. In Brazil, leaders in Xingu national park have blocked access through sealing off roads and the São Gabriel da Cachoeira municipality has enforced a lockdown.

Efforts to isolate indigenous tribes in Brazil have been counteracted by an uptick in illegal encroachments into their land. The 153 reported invasions of indigenous territories since January amount to more than twice 2019 reported numbers. Meanwhile, the Institute of Environment and Renewable Natural Resources, Ibama, reduced the number of agents in the field monitoring for deforestation to prioritize the health of its workforce. Continued enforcement efforts have declined since the director of protection and two high-level field specialists at Ibama were fired after conducting an operation to expel illegal miners from indigenous territory. Illegal mining has been on the rise as global spikes in the price of gold have increased incentives during COVID-19. Notably, transmission of COVID-19 to the Yanomami tribe has suspected links to the 20,000 illegal gold miners operating in the region.

A presidential decree issued by President Bolsonaro, known as Provisional Measure 910 (MP910), has likely further emboldened farmers, loggers, and miners to claim indigenous land. If passed, MP910 would legalize the right of squatters to own of up to 2,500 hectares of government-controlled reserves. According to Imazon, an environmental non-profit, “the measure permits titling public areas which were illegally deforested with the objective of obtaining the land.” The deadline for passing the decree was May 19, 2020, but a technical note to parliamentarians delayed the vote to May 20. The outcome may have significant implications for indigenous people in Brazil. President Bolsonaro has long advocated for development in the Amazon and contested the right of 690 indigenous territories in Brazil to cover an estimated 13 percent of the land.

A similar rule was released in April by Brazil’s National Indian Foundation (Funai) to enable squatters to legalize claimed land in reserve territories that have not been officially demarcated and approved. The National Council of Human Rights disputed the rule on the basis that 237 indigenous reserves have not completed the lengthy process that requires a presidential signature. A total of 49 federal prosecutors have since decried the rule as illegal and unconstitutional.

While global attention is focused on COVID-19, deforestation rates in Brazil are rising. The first four months of 2020 saw a 55 percent increase over the same period in 2019. In April, alone, deforestation rates increased by 64 percent. This trend was amplified in hotspot regions. The state of Pará, for instance, recorded first-quarter rates 240 percent higher than in 2019. Reduced enforcement and an uptick in illegal activities on reserves have positioned indigenous people as the last line of defense and vulnerable to attack. In the last six months, there have been five reported murders of indigenous people. The “extreme threat” to these groups in Brazil was highlighted in an open letter to President Bolsonaro from dozens of artists, musicians, and actors around the world, including Oprah Winfrey, Paul McCartney, and Sylvester Stallone.

Preparing for the upcoming fire season

Indigenous people are facing yet another threat as the summer approaches. May marks the beginning of the dry season, followed by the peak of the fire season between June and October. On deforested land intended for other uses, burning is frequently used to clear forest debris. As such, the high rates of deforestation during COVID-19 are likely to lead to a fire season that further increases risk to indigenous groups. Indicators, according to the Center for Higher Amazonian Studies, suggest that deforestation will continue to soar as COVID-19 spreads. Notably, first-quarter sales of crawler tractors in Brazil exceeded combined sales for the last three years. “You use a crawler tractor for two things: civil construction, which is not the case in Brazil at the moment in the middle of an economic crisis, or to deforest.” As CRR pointed out in a recent report on the 2019 fire season, deforestation, which is often linked to fires, has hurt the reputation of companies operating in the cattle and soy sectors. If the 2020 fire season is in the global spotlight, as it was in 2019, international companies operating in the cattle and soy sectors and their investors may see reputation risks grow.

The devastating 2019 fire season in Brazil also underscored the widespread impact of forest fires on air quality, which will likely to be compounded by the respiratory symptoms associated with COVID-19. A recent Harvard University study showed that even increasing fine particulate matter (PM2.5) by one microgram per cubic meter corresponded to a 15 percent rise in COVID-19 mortality. Infectious diseases, deforestation, and forest fires have each shown to have widespread consequences for indigenous people, but the combination of all three threats indicates a particularly dangerous fire season in 2020.

Please join CRR analysts for a webinar on the 2019 fires in Brazil and Indonesia. See here for more information and registration details.

3 Responses to The Chain: Corporate ESG Risks Mount as Indigenous Groups in Brazil Face Threats on Multiple Fronts During COVID-19