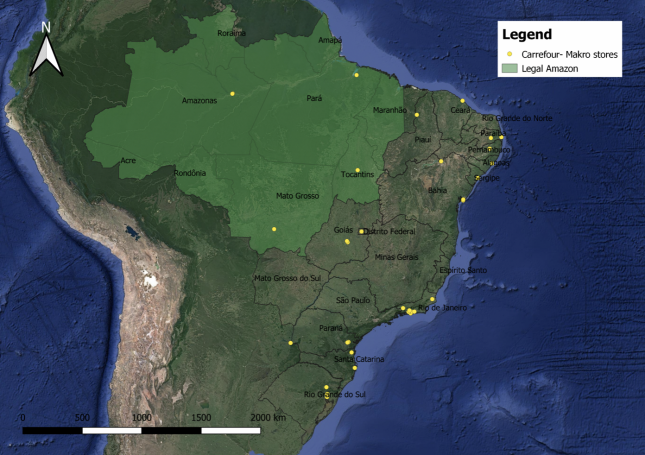 The Chain: Carrefour’s Deforestation Risks May Increase With Brazilian Expansion

Carrefour is expanding its operations in Brazil. Last week, Carrefour Brasil said that it is purchasing 30 retail stores from Makro Atacadista SA for almost BRL 2 billion (USD 456 million). The stores are located throughout 17 Brazilian states (see graphic below). The expansion, which will increase its Brazilian market share by 1.5 percent, would require alignment with Carrefour SA’s sustainability pledges, which include a zero-deforestation commitment through its membership in the Consumer Goods Forum. Carrefour will now need to align the 30 new stores’ existing procurement systems with its zero-deforestation policy. This potentially requires changes in the purchasing practices of significant volumes of beef. Carrefour has not indicated how it would do so.

There are at least four stores located within the legal Amazon, heightening deforestation risks, as they can source from a wider range of nearby slaughterhouses.

Graphic 1: Location of Makro stores to be purchased by Carrefour 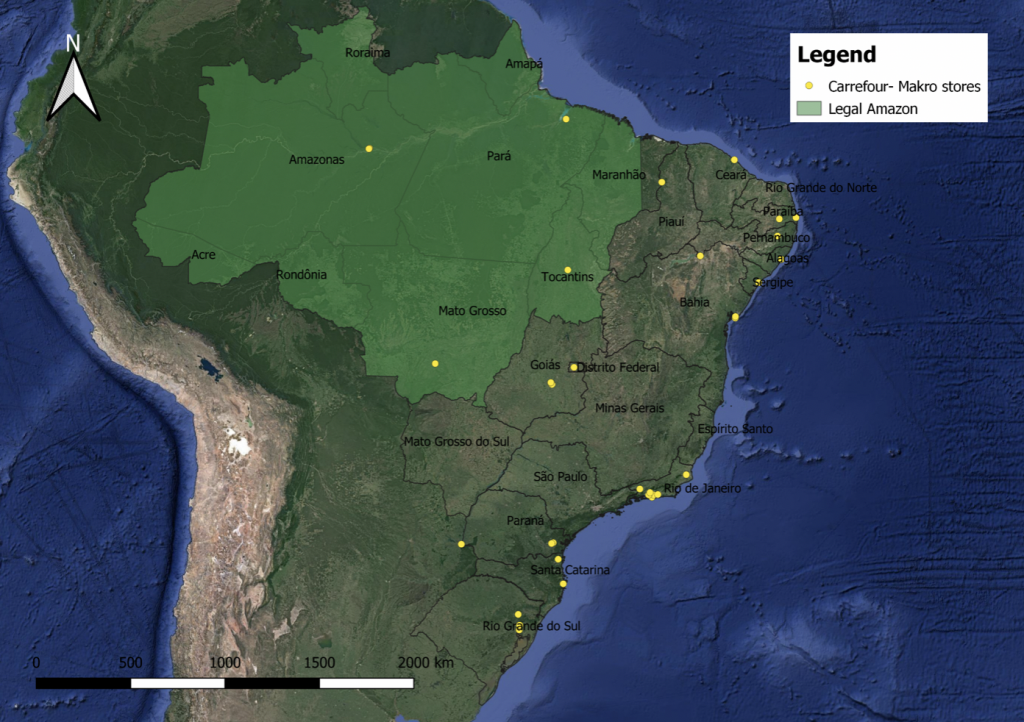 Carrefour Brasil’s purchase of the Makro stores comes soon after its competitor, Casino’s GPA, increased its own footprint in Brazil. Chain Reaction Research (CRR) has linked both companies to purchasing beef from high-risk slaughterhouses in the Amazon. In its investigation of Carrefour, published in February 2019, CRR found 11 products in Carrefour Brasil supermarkets that were sourced from JBS, Marfrig Global Foods, and Mercúrio. The three suppliers signed agreements (TACs) with the Brazilian governments to not purchase from recently deforested farms.

Last summer, Carrefour Brasil came under heightened pressure in the face of connections to the fires in the Brazilian Amazon amid engagement from international NGOs, investors, and civil society. As a result of this pressure, Carrefour Brasil sent letters to its top suppliers (Bunge, JBS, Marfrig, Minerva, and Cargill), asking them what actions they have taken to protect the Amazon and other ecosystems.

Against the backdrop of Carrefour Brasil’s expansion, the company will need to take measures to meet its commitment of eliminating deforestation in its beef supply chain. Should Carrefour see reputation risks from links to deforestation, CRR estimated that civil society and consumer campaigns could negatively affect the company’s net revenues and gross profit, with the value impact totaling 4 to 10 percent of Carrefour Brasil’s market capitalization (USD 9.8 billion)

In awareness of this reputation risk, the company has boosted its sustainability initiatives in recent years. Carrefour Brasil, for instance, is working with the Collaboration for Forests and Agriculture, which supports companies in implementing Deforestation and Conversion Free (DCF) commitments for beef and soy supply chains in the Amazon, Cerrado, and Chaco biomes. In September 2018, Carrefour SA launched its “Act for Food” effort to support its supply chain transparency and reduce deforestation-related risks. Carrefour is considered a leader in sustainability, as reflected in its inclusion in the Dow Jones Sustainability Index.

Carrefour did not respond to CRR’s questions on what safeguards the company will put in place to guard against increased deforestation risks with its Brazilian expansion. Analysts expect Carrefour to continue with M&A and expand even more in Brazil. Carrefour Brasil’s net income rose by 6 percent in Q4 2019 on higher sales. It is targeting an additional 20 new retail stores each year.

2 Responses to The Chain: Carrefour’s Deforestation Risks May Increase With Brazilian Expansion

« The Chain: Repeat Offenders Continue to Clear Forests for Oil Palm in Southeast Asia The Chain: Despite New Commitments from Tyson, Kellogg’s and PepsiCo, Industry Still Mixed on Progress in Reducing Deforestation Risks in Supply Chains »