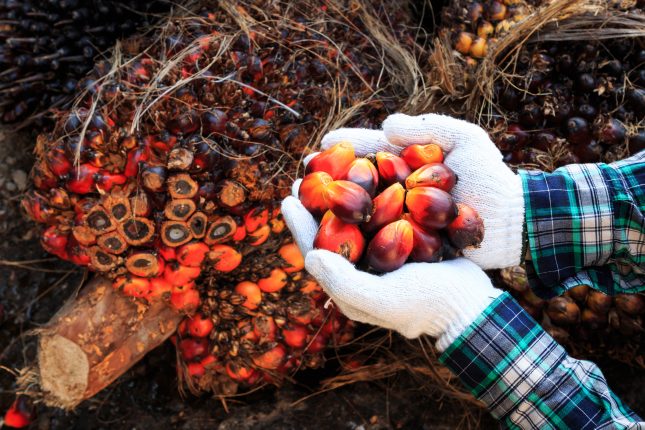 A feature of this year’s list compared to previous years is the presence of two companies in Peninsular Malaysia, YP Olio and Nadi Mesra. Last year’s largest deforesters were exclusively Indonesian companies. Another feature is the number of concessions clearing forest despite not having a mill and seemingly without links to the international No Deforestation, No Peat, No Exploitation (NDPE) market. This trend has been growing in the palm oil sector in the last few years, particularly in Indonesia. In 2020, domestic consumption in Indonesia drove demand for palm oil in Indonesia as exports fell due to the COVID-19 pandemic. Demand has particularly come from Indonesia’s domestic biofuel sector, where weak standards have long presented a leakage risk.

The decline is also a consequence of the successful uptake of NDPE policies in the palm oil sector. As buyers have increasingly removed deforestation-linked palm oil from their supply chains, those companies still deforesting are operating outside of the NDPE market. 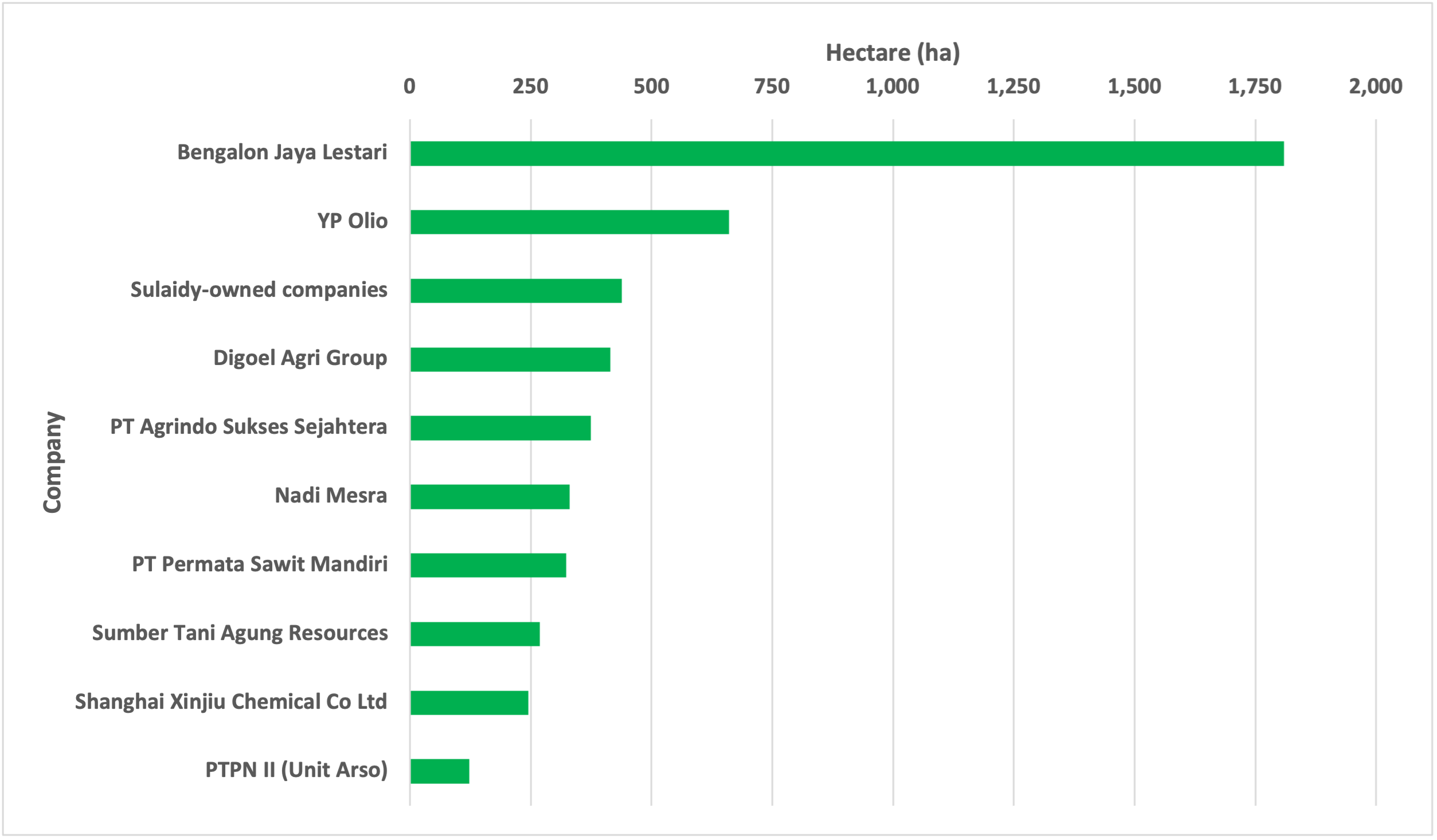 Bengalon Jaya Lestari first made CRR’s list of the top deforesters for the first half of 2020, and has continued to appear. During the first half of 2021, approximately 1,800 ha of peat clearing happened on two oil palm plantations operated by the group in North Kalimantan, PT Kartika Nugraha Sakti and PT Wana Jaya Abadi. Bengalon Jaya Lestari does not appear to own any mills, so it is difficult to link it with any NDPE supply chains.

In second place is YP Olio Sdn Bhd, a Malaysian oil palm plantation company whose concession is in Pahang, Peninsular Malaysia. The plantation project has included forest clearing of 660 ha between January to June 2021. The total area of the landbank is 8,500 ha. The location was once part of Bukit Ibam Forest Reserve, which was degazetted in November 2020.

Half of the shares of the company are owned by a member of the Pahang Royal family. YP Olio is reportedly involved in a land conflict with members of the Orang Asli indigenous people. Claims include that the company misled Orang Asli into signing a contract supporting plantation development. YP Olio does not have palm oil mills, and links to NDPE supply chains is unknown. 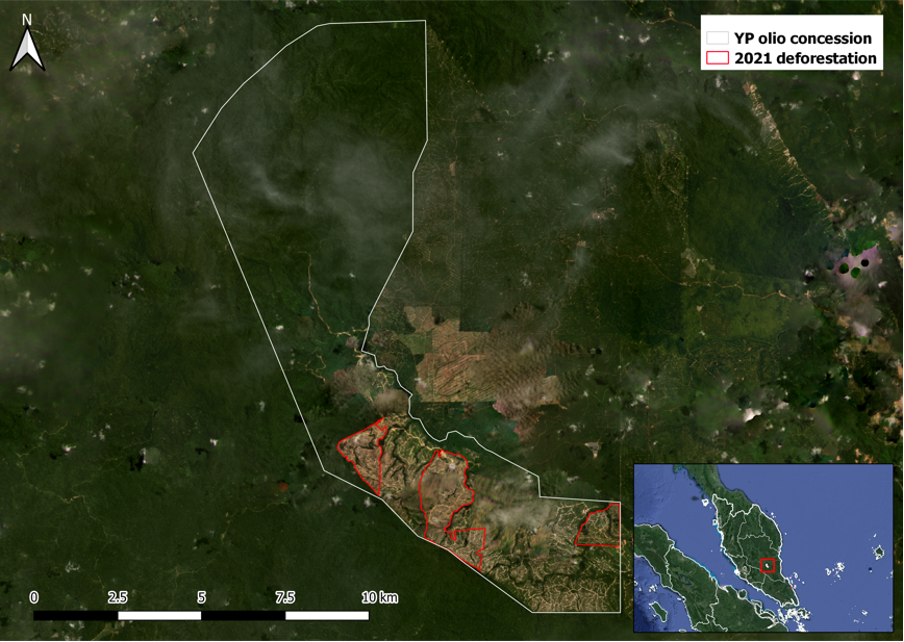 Sulaidy-owned companies have been in the top three top deforesters in the palm oil industry every year since 2018. During the first half of 2021, around 440 ha of forest clearing was detected within oil palm concessions belonging to Sulaidy. The majority of the clearing took place within PT Citra Palma Pertiwi and PT Borneo Citra Persada Jaya, both of which are located in East Kalimantan, and around 350 ha of forest loss has occurred on both concessions.

CRR has never conclusively connected Sulaidy-owned concessions to international supply chains. However, a recently constructed palm oil mill in West Kutai, East Kalimantan likely belongs to Sulaidy, given its proximity to Sulaidy-owned concessions. CRR has not been able to obtain further information. However, a building of the new mill risks deforestation-linked palm oil entering NDPE-covered refineries, prompting buyers to be vigilant and conduct due diligence on all potential new suppliers. 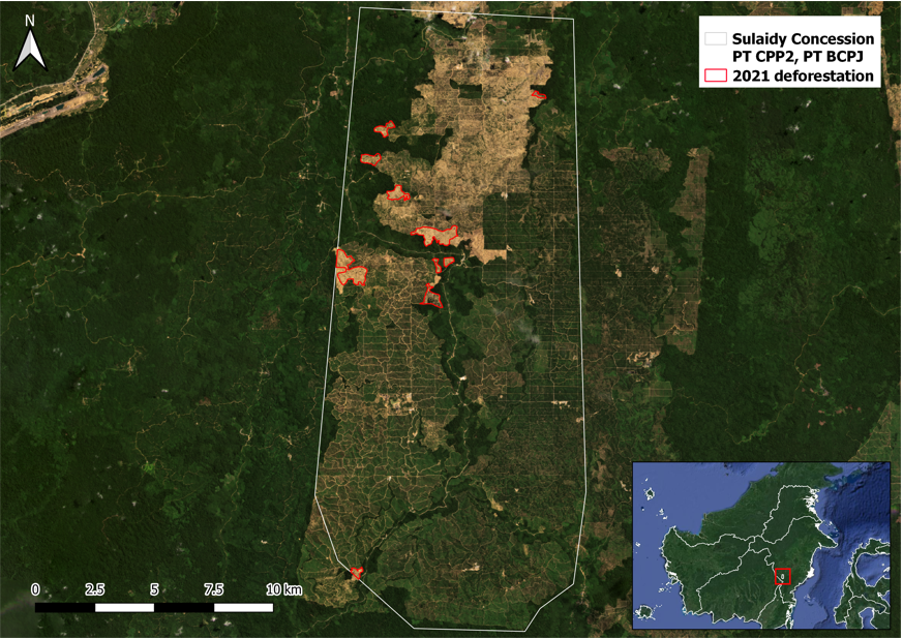 In the fourth position is Digoel Agri Group, a plantation company operating in Papua owned by a New Zealand property developer. The plantation is known as the Tanah Merah project and was previously operated by HSA Group/ Pacific Inter-Link and Maxim Group. Between January to August 2021, 400 ha of deforestation was detected within its oil palm plantation concessions in Papua, PT Manunggal Sukses Mandiri and PT Trimegah Karya Utama.

Digoel Agri has allegedly been conducting land clearing without obtaining consent from the local indigenous people. In a response letter from Digoel Agri to a journalist, Digoel Agri said that it will identify High Conservation Value and High Carbon Stock areas and develop a recovery plan that protects and assists forests and local communities. The concession has not been linked to international supply chains.

PT Agrindo Sukses Sejahtera has appeared in the top deforester list for the first time. Approximately 370 ha of clearing was detected within the company’s concession in East Kalimantan in the first half of 2021. The company is owned by Agus Suparmanto, a well-known businessman who was Indonesia’s Minister of Trade between 2019 and 2020. There is little public information about the company, and it does not appear to have a mill.

In the sixth position is a Malaysian company with an oil palm plantation in Johor, Nadi Mesra. Analysis by CRR shows a total of 330 ha of land clearing was detected within the company’s concession during this period. The concession was once part of Tenggaroh Permanent Reserve Forest and was degazetted in 2015. The plantation business permit given to Nadi Mesra covers 5,000 ha.

In August 2020, Nadi Mesra was reportedly applying for another 2,000 ha of land in the same reserve forest for the purposes of developing oil palm plantations. The Tenggaroh forest is home to rich array of biodiversity. Nadi Mesra does not appear to have a palm oil mill, and therefore there are no known links to NDPE supply chains.

The seventh position is filled by PT Permata Sawit Mandiri in Ketapang, West Kalimantan, which was fifth last year. Between January to August 2021, approximately 320 ha of deforestation was detected within PT PSM’s concession. The company is owned by Mr. Ikhsanudin. Due to limited information, CRR cannot link the company to any NDPE supply chains.

PT Sebaung Sawit Plantation and PT Palem Segar Lestari have a puzzling ownership history. Initially, CRR attributed both companies to Rugao Shuangma. In a report on the China’s role in palm oil business, CRR separated the ownership of these two companies, with PT Sebaung Sawit Plantation belonging to Shanghai Xinjiu Chemical and PT Palem Segar Lestari under Henan Jiujiu Chemical. CRR recently revised the ownership and has now re-grouped them under Rugao Shuangma Chemical based on the following:

In the last position is PTPN II, a subsidiary of the Perkebunan Nusantara holding company. Perkebunan Nusantara is a state-owned enterprise whose businesses are focused on agricultural commodities, including oil palm, coffee, tea, sugarcane, tobacco, cacao, and rubber. It has nine other oil palm subsidiaries beside PTPN II.

CRR has detected around 120 ha of forest clearing in Unit Arso, an oil palm concession in Keerom District, Papua, Indonesia. As well as this deforestation, PTPN II in Arso is known to have been involved in a longstanding land dispute with indigenous people of Keerom. PTPN II enters NDPE supply chains through Bunge Loders Croklaan (BLC), Danone, HSA/Pacific Inter-Link, Kellogg’s, KLK, Olam and P&G.