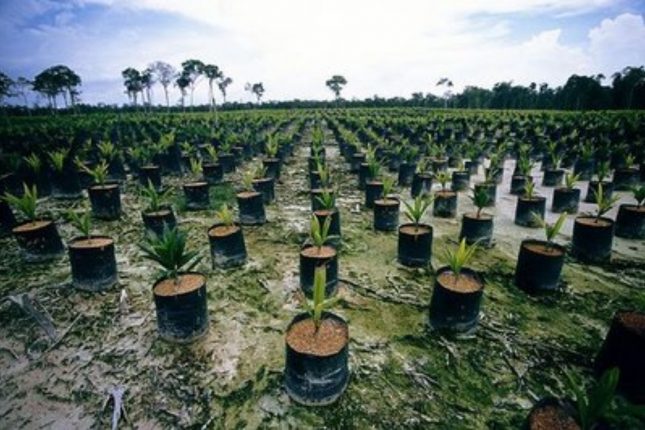 Jhonlin Group, one of the largest deforesters for oil palm plantation development in Indonesia in the last few years, has reportedly completed the construction of a new biodiesel plant, PT Jhonlin Agro Raya (PT JAR), in Tanah Bambu district, South Kalimantan. The plant, which will mainly serve Indonesia’s domestic biofuel sector, can process 60 metric tons of fresh fruit bunches (FFB) per hour, and thirty percent of the plant’s capacity is planned to be met by FFB supplied by Jhonlin’s own subsidiaries.

The first shipment of Fatty Acid Methyl Esters (FAME) produced by PT JAR was made on September 11, 2021 to Pertamina, Indonesia’s state-owned energy enterprise. The shipment totaled 5,000 kilolitre (kL) in volume, and future shipments are expected to reach 50,000 kL by the end of December 2021. Pertamina’s suppliers are decided annually by Indonesia’s Ministry of Energy and Mineral Resources, with lists published at the end of every year for the subsequent year. Jhonlin was not initially listed as a 2021 supplier, but it formed part of an additional biodiesel quota given by the government. Other companies included in the quota are not known.

Jhonlin Group is owned by Haji Andi Syamsudin Arsyad (commonly known as Haji Isam), a businessman from South Kalimantan whose businesses range from coal mining to agricultural commodities. The group has a longstanding history of violating No Deforestation, No Peat, No Exploitation (NDPE) commitments. It is not a member of Roundtable on Sustainable Palm Oil, and it has not committed to NDPE compliance. Since 2018, the group has been on CRR’s list of the top 10 for oil palm in Southeast Asia. Approximately 11,900 hectares (ha) were cleared within the group’s oil palm concessions between 2018 and 2020.

One such concession is PT Pradiksi Gunatama in East Kalimantan. Between 2016 and 2018, CRR detected almost 800 ha of deforestation on the concession. In 2020, PT Pradiksi Gunatama went public and raised over USD 7 million on the first day of its Initial Public Offering (IPO). According to the company’s prospectus, it would use part of the money raised for land clearing.

Johnlin is also a significant deforester for industrial tree concessions. Between 2016 and 2021, around 3,000 ha of forest were cleared within its industrial concessions, mainly in PT Jhonlin Agro Mandiri in Tanah Bumbu District, South Kalimantan.

The establishment of a new biodiesel plant highlights two significant threats to sustainability efforts in the palm oil sector: The biodiesel sector (particularly the domestic Indonesian market) and companies suspended by NDPE trader/refiners that have their own refining facilities. The biofuel sector has weaker standards than the NDPE market, and has provided a leakage market for several suppliers suspended for deforestation issues. Fourteen percent of Indonesia’s initial biodiesel allocation for 2021 went to non-NDPE companies.

Jhonlin’s construction of a biodiesel plant follows the trajectory of Indonesian plantation developer PT Sawit Sumbermas Sarana (SSMS). Increasingly suspended from the NDPE market over continued deforestation on its concessions in Central Kalimantan, PT SSMS in 2019 began circumnavigating the NDPE refining sector when its related party PT Citra Borneo Utama (CBU) established its own refinery. CRR previously reported that in the first nine months of 2019, PT CBU bought 86 percent of SSMS’ produce. There is no known information on whether PT CBU sells its refined palm oil. Jhonlin’s biodiesel plant similarly allows it to service a leakage market, removing the ability of NDPE buyers to apply pressure to stop forest clearing.

Biofuel’s importance in the value and profit chain of palm oil has increased in recent years and is now around five percent of the total. Fast moving consumer goods (FMCG) companies dominate with 38 percent of the global gross profits that are earned on embedded palm oil. The global palm oil-related biodiesel market is valued at USD 16 billion, and the gross profit and operating profit of palm oil diesel is valued at respectively USD 2.4 billion and USD 1.4 billion. Within the whole palm oil value chain (including food, oleochemicals, home care etc), PT  Pertamina is the number two company in generating gross profit from embedded palm oil (USD 1 billion), after number one Wilmar and ahead of number three Unilever.