In Q1 2016, IOI Corporation’s (IOI:MK) stock price rose to a year-to-date high of MYR 5.00. In February 2016, Chain Reaction Research published a report warning that IOI’s equity value might collapse given Chain Reaction Research’s forecast that the Roundtable on Sustainable Palm Oil (RSPO) might suspend IOI shortly thereafter. In March 2016 RSPO temporarily suspended IOI due to its clearing of forests in violation of RSPO’s policy. As forecasted, by May 2016, IOI’s shares fell 18% to MYR 4.12 while IOI lost 26 major corporate customers. Separately, IOI announced it would sue the RSPO of which it is a voluntary member. Finally, by mid-May 2016, analysts’ negative recommendations peaked and Moody’s reviewed IOI’s debt for a downgrade.

Appreciating these clear market signals, IOI changed its approach. On June 6th, 2016, IOI withdrew its lawsuit against RSPO and announced it would focus on improving its sustainability profile to achieve customers’ No Deforestation, No Peat, No Exploitation (NDPE) commitments and zero-deforestation polices. In doing so, IOI announced it would strive to achieve a more stringent RSPO Next certification by Q4 2016. Shortly afterwards IOI’s equity price gained 6% reaching MYR 4.38 by July 11, 2016. 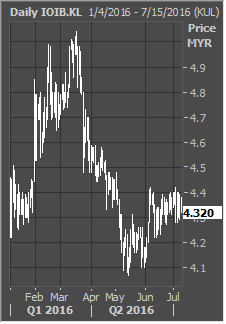 As shown in Figure 1, IOI’s decision to drop its lawsuit against RSPO and to come into compliance with customers’ NDPE polices, as well as its statement that it wants to achieve the RSPO Next certification by Q4 2016, are positive signs that IOI may be supporting its higher-margin CSPO business line – allowing for equity price recovery. At the same time, IOI still has one major RSPO complaints pending.

In summary, IOI’s RSPO suspension is likely to result in lost revenue and reduced operating earnings, continued equity price downdrafts and reputational damage. To demonstrate that IOI understands its market and customers’ concerns, the company may want to focus on achieving RSPO compliance and RSPO Next certification and establishing stringent operational risk controls that properly manage its landbank. Yet, questions remain regarding whether RSPO Next is operational. IOI may benefit from employing a robust operational risk management framework built on sustainability, so as to demonstrate to investors the seriousness with which it takes its current RSPO suspension and its possible palm oil revenue at risk. Simply put, IOI cannot move forward without resolving its RSPO cases first. 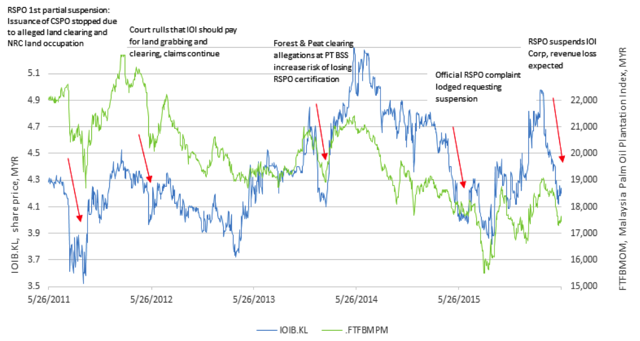 IOI’s 5-year equity price trend compared to IOI’s major landbank shows that RSPO concerns may have resulted in negative price swings on five occasions. This may represent a pattern for IOI. Repeated allegations of forest and peatland clearing, land grabbing, occupation of customary land and RSPO complaints and violations may have contributed to IOI’s equity volatility and to its temporarily underperforming the FTSE Malaysia Palm Oil Plantation index. As shown in Figure 2 above, IOI’s landbank and RSPO exposure often is not fully priced into its equity valuation.

As shown in Figure 2 above, IOI’s equity value dropped from a year-to-date high of MYR 5 on March 14, 2016 to year-to-date low MYR 4.12 on May 16, 2016. Over this same period, the FTSE Malaysia Palm Oil Plantation Index lost 9% and the Jakarta Agricultural Index lost only 4%. Prior to its suspension, IOI was outperforming both indices with a year-to-March 14 th, 2016 return of 19%, while the two indices had returned 11%.

Failure to redress RSPO complaint cases might negatively impact IOI’s equity value. If IOI fails to address its RSPO non-compliance in its two complaint cases and to meet customers’ NDPE procurement requirements, its suspension may drag on, possibly depressing IOI’s equity valuation. The second non-resolved RSPO complaint might further hamper IOI’s publicly stated commitment to obtaining the more stringent RSPO Next certification. Because 20% of IOI’s crude palm oil (CPO) is estimated to be sourced from third parties, IOI may also require that its suppliers adhere to RSPO’s Next certification. Furthermore, IOI is likely to see controversy over its third party supply base in the near-term. 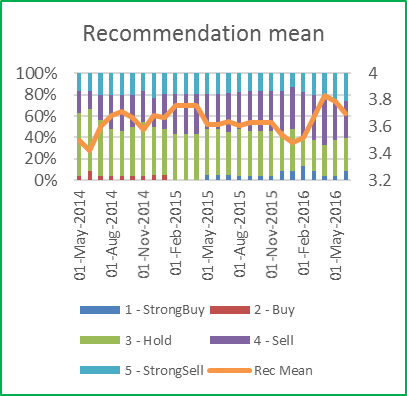 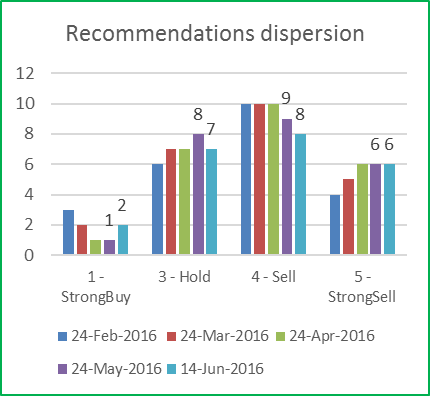 Analysts downgraded IOI after its RSPO suspension. As shown in Figure 3 below, according to Thomson Reuters, analysts’ opinion after the announcement of the RSPO lawsuit was that IOI was a ” strong sell“. Since IOI announced it was no longer pursuing its lawsuit against RSPO, Maybank and MIDF Research revised their recommendations from underperform to a buy. CIMB also revised its recommendation to a hold. Investors have also reported confidentially to Chain Reaction Research that they likewise downgraded IOI given its RSPO suspension.

Moody’s “reviews IOI for downgrade,” investors now may be in breach of their own sustainability policies. Due to the RSPO suspension and IOI’s revenue and margin uncertainty, IOI’s credit profile has destabilized. As a result, on May 11, 2016, Moody’s announced it was reviewing IOI’s senior unsecured bonds and bank credit facilities for a downgrade, suggesting that IOI may experience difficulties servicing its liabilities. Additionally, as shown in Figures 8, 9, and 10 in the appendix, IOI’s creditors, investors, and underwriters may now also have their sustainability policies at risk of violation because of IOI’s RSPO noncompliance.

IOI may continue to lose CSPO higher margin market because its puts customers in breach of their sustainability policies. Unless IOI can resolve its RSPO certification noncompliance, the company may lose more customers who increasingly demand CSPO from suppliers in order to support achieving their NDPE and zero-deforestation commitments. 51% of IOI’s revenue comes from markets with numerous customer NDPE commitments – 15% revenue exposure to the US and 36% to the EU markets.

32% operating earnings are at risk, quarter-over-quarter for Q2 2016, which is IOI’s fiscal year end. Although IOI’s palm oil segment generates 15% of its revenue, it contributes 67% to its earnings. This means that small revenue losses can have larger impacts on net income. Analysis shows that $23 million (MYR 91 million) in revenue are uncertain as are $36 million (MYR 144 million) operating earnings due to loss of customers. The main assumptions for the estimates are:

Thus $23 million of palm oil revenue may be at risk, but could be offset by generally higher CPO prices. This is how IOI’s annual revenue is forecasted up by 1.4% on an annual basis.

As Q2 2016 is the last quarter of the fiscal year 2015/2016 for IOI, total sales for that year are forecasted down 3% and operating earnings down by 8%; this is offset by higher CPO prices. As IOI profits from rising CPO prices, the negative financial effect of the RSPO and consecutive customers’ suspension is not discernible in its forecasted financial results of $2,841 million revenue and $1,014 operating earnings. IOI’s 2017 forecasts remain, however, contingent on IOI’s progress with RSPO. Evidence from other studies shows that it usually takes three months to find replacement customers, which means it can be assumed that IOI could find them for its fiscal 2017. The price IOI could get with new customers, however, may be lower than previously secured.

Revenue loss due to procurement policy noncompliance resulted in depressed profit margins and increased liquidity risk as 26 customers suspend contracts with IOI. As previously reported by Chain Reaction Research, growers that did not meet customers’ procurement policies experienced difficulty finding replacement customers and lost leverage in contract negotiations, which resulted in worse terms and conditions than would otherwise be expected. Material consequences were decreased profits, decreased returns to shareholders and increased liquidity risks – likely similar to Moody’s review for downgrade.

As reported June 12 th, 2016 in the Financial Times, Nestlé stated it would be closely monitoring IOI. Nestlé disengaged completely soon after. Unilever stated it would no longer purchase from IOI and Kellogg’s shifted 67% of its IOI CSPO purchases to other suppliers. Mars opted out from purchasing during the suspension. Mondelēz responded that it requires all its suppliers to have valid RSPO certification.

Yet it is critical to understand that IOI’s RSPO suspension, if resolved, may not result in customers returning – since IOI has been clearly in breach of some of these customers’ NDPE and zero-deforestation procurement policies.

IOI downplays its revenue at risk at 0.5%, but peers in similar situations have experienced up to 10% revenue at risk. On March 24, 2016, IOI said that as its CSPO premium was 0.5% and that IOI’s revenue would only slightly decrease because of the suspension, equating to est. $3.5 million lost revenu e per quarter. However, the June 2016 Chain Reaction Research report Palm Oil Revenue at Risk: Failure to Meet Buyers’ Procurement Policies Results in Lost Revenue found that similar firms’ inability to meet customers’ sustainability policies has resulted in revenue at risk at 10% – 20 times IOI’s estimate. This is primarily driven by the loss of existing customers and the associated difficulty finding other replacements on short notice, and the loss of CSPO price premium. This suggests that IOI’s revenue at risk may range from 0.5% to 10%.

As shown in Figure 6 below, despite its RSPO suspension, IOI may finish the year at a PE ratio above 27. This would still be trending a third higher than historical average (2009 to 2014) and still above peers’ and industry mean. Forecasts for IOI’s fiscal 2017 are also positive, given that unsold inventory in 2016 can be sold in 2017.

IOI has articulated corrective actions, implementation needs to be demonstrated. On June 6th, 2016, IOI submitted its action plan to the RSPO stating that it has begun rehabilitating affected areas and increasing its capacity to prevent forest fires on its concessions. IOI also stated it is willing to engage further with legal and sustainability stakeholders and to better adhere to evolving Indonesian la w and policies. IOI must also reengage its customers to assure that future palm oil contracts will not conflict with NDPE and zero-deforestation procurement policies.

The pending development of the RSPO complaint case in Long Teran Kanan, Sarawak, Malaysia against IOI continues to represent risk to IOI. Should IOI fail to address its two pending RSPO complaint cases, RSPO noncompliance could be maintained and customers suspending contracts might continue indefinitely.

IOI is a founding member of RSPO with significant interest in the future of the organization. As a member IOI is expected to:

In addition, IOI is known to supply custom-made specialty fats that its customers depend on – yet still 26 customers suspended IOI. The longer IOI fails to address market expectations, the more likely its customers will find alternative suppliers and the less likely they will return to IOI. While IOI may hastily be pushing to resolve its RSPO complaints, IOI’s customers’ concerns may increase if IOI is seen as rushing to resolution without executing the expected “on-the-ground” changes its customers require.

In summary, IOI’s RSPO suspension is likely to result in lost revenue and reduced operating earnings, continued equity price downdrafts and reputational damage. To demonstrate that IOI understands its market and customers’ concerns, IOI may want to focus on achieving RSPO compliance and RSPO Next certification and establishing stringent operational risk controls that properly manage its landbank and RSPO risks. IOI may benefit from employing a robust operational risk management framework built on sustainability, so as to demonstrate to investors the seriousness with which it takes its current RSPO suspension and its possible palm oil revenue at risk.