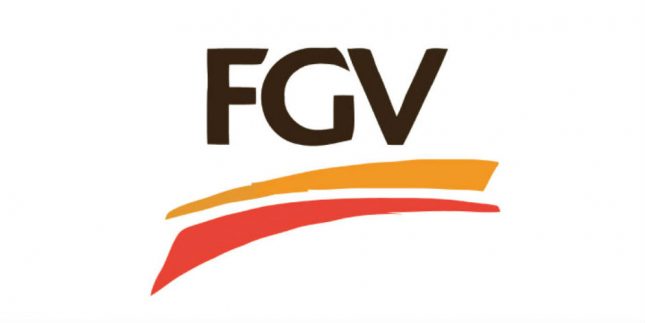 As of April 28, it appears that Felda Global Ventures’ (FGV) management has yet to acknowledge the company’s possible risk exposure to Government of Indonesia’s administrative sanctions and buyers’ suspensions over continued peat clearance by its Indonesian subsidiaries. Peatlands are the world’s largest carbon sinks.

The image below in Figures 1 and 2 show that in 2017, FGV subsidiary PT Temila Agro Abadi has cleared a total of 390 ha of peatland. This included High Conservation Value forests. 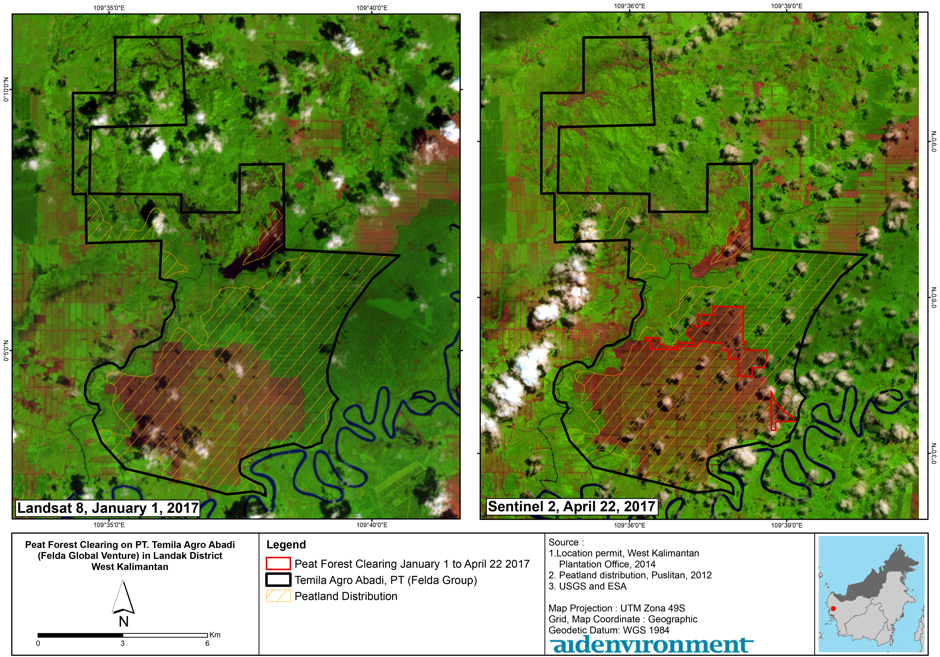 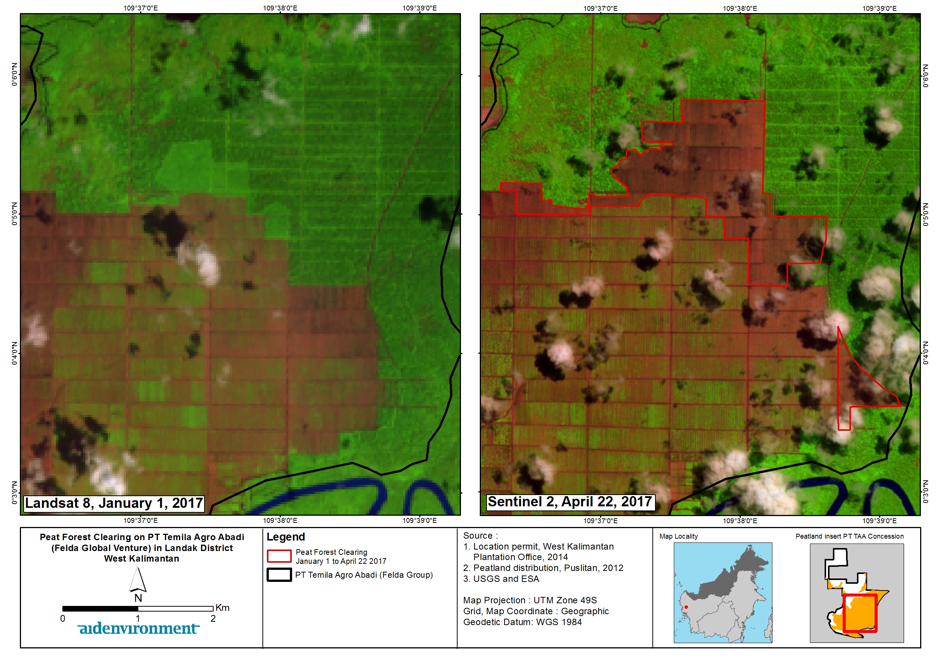 FGV stated on the Bursa Malaysia:

“[The] Board of FGV wishes to clarify that FGV has procured all necessary approvals from the relevant authorities in Indonesia in respect of the development of PT TAA’s land which commenced in late 2014. Further, FGV has complied with Roundtable on Sustainable Palm Oil (RSPO) New Planting Procedure (NPP) 2010. FGV is in the process of appointing [a] third party assessor to conduct a verification exercise on the said articles.” 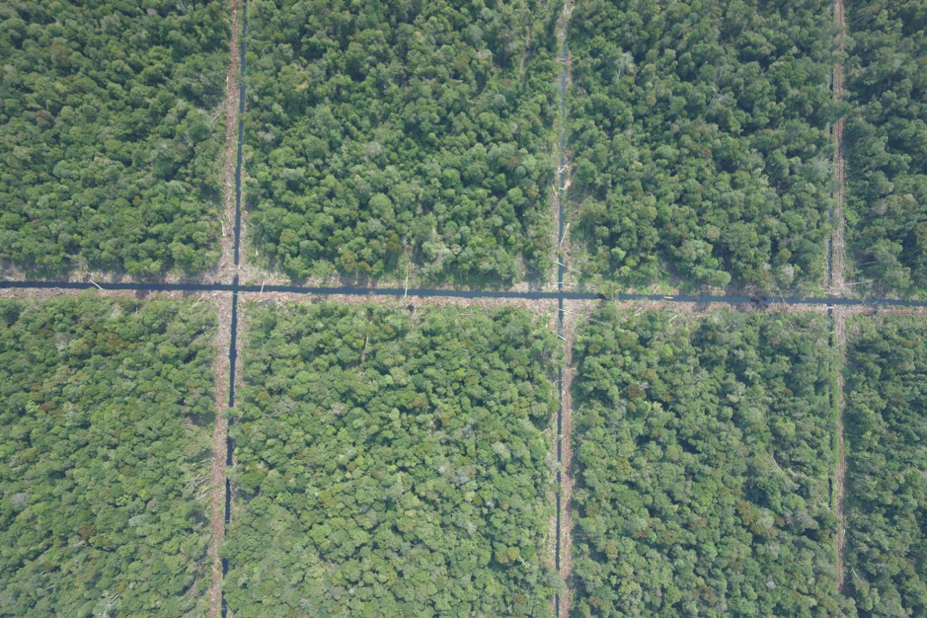 Nonetheless, the assertion that FGV was granted legal authority to deforest appears to contradict Indonesian Government Regulation No. 57/2016. This possible legal violation is supported by the recent satellite images from April 22, 2017 demonstrating recent deforestation of its subsidiary’s concession, as shown above in Figures 1 and 2.

Does FGV’s Deforestation Violate its Own Board of Director’s Policy?

On August 25, 2016, FGV’s Board of Directors and new CEO and Group President Zakaria Bin Arshad issued its new sustainability policy. It states that the company has committed to provide accurate, factual, and balanced information on its sustainability initiatives to all its shareholders and stakeholders on an annual basis.

6.7: The Group shall not perform any development in areas rich in biodiversity or that are under protection e.g. primary forests, wildlife reserves and wetlands. The Group has appropriate action plans in place which are in line with international guidelines and established practices to guide the operations near these areas and to continually improve the Group’s practices. The Group pledges to no conversion of HCV areas, peat soil, and/or areas with High Carbon Stock (“HCS”) and implementation of Best Management Practices for existing peat land estates. The Group shall perform a HCV assessment through which it will develop management and monitoring plans. In addition, the Group will ensure that the operations do not pose a threat to wildlife and establish programmes to enhance and enrich habitats of endangered species.

President Jokowi affirmed by law his policy of no-peat development when signing Government Regulation No. 57 on December 2, 2016. The regulation, known as ‘PP Gambut,’ amends an earlier regulation (No. 71/2014) concerning the protection and management of peatlands ecosystems. The new regulation declares a ban on all new peat development in Indonesia until appropriate action plans are in place. Failure to comply will result in administrative sanctions as per article 40 paragraph (3) of the earlier regulation. These sanctions include:

During a meeting between Chain Reaction Research-partner Aidenvironment and FGV and its advisors in Jakarta on April 22, Aidenvironment suggested that FGV adopt an immediate stop-work order in Indonesia in view of legislation, buyers’ zero-deforestation procurement policies, RSPO standards and FGV’s own Group Sustainability Policy.

FGV’s legal advisor stated that President Jokowi’s peat moratorium would not apply to FGV because the government had previously issued permits to clear the peat. A similar argument was cited in an article published by The Edge.

Defiance of Indonesian law may trigger the Ministry of Environment and Forestry to commence investigations, as in other previous instances. FGV’s buyers may also intervene by suspending purchases. Various buyers have previously committed to end trading with companies that violate their procurement policies.

Before FGV’s USD 3.1 billion June 2012 IPO, FGV set a goal to become the world’s largest palm oil company with a targeted land bank of over one million ha. Its IPO prospectus asked FGV to provide a certification plan in accordance with RSPO criteria. Despite several acquisitions, FGV did not reach either goal.

On May 2, 2016, FGV withdrew its Roundtable of Sustainable Palm Oil (RSPO) principles and criteria certificates from 58 complexes spread across Malaysia. It announced the Group might spend USD 8 to USD 10 million over a three-year period to recertify its mills to RSPO.

FGV is a member of RSPO.

Aidenvironment’s Eric Wakker was informed by FGV insiders that FGV’s allegedly management did issue an internal stop-work order during the week of April 24 while stating publicly that it stood by its rights to clear more peat forest.

It is unknown how RSPO will respond.

Malaysian Mega-Merger Possible Controlling 1.2 Million Hectares, Much of it in Indonesia

April 29, 2017, the Star Online reported that the Federal Land Development Authority of Malaysia may seek the return of land currently leased to and managed by FGV.  The article suggests the Federal Land Development Authority thinks it can extract higher returns by managing the land directly. The land is leased for 99-years at an estimated discount rate of 9.47 percent.

The Star Online also stated that FGV would also like to see a new shareholder. The article suggested that this new investment vehicle could be lead Wilmar International Ltd co-founder Martua Sitorus.

The non-publicly listed plantation assets owned by Sitorus and his immediate family members have minimal visible exposure within the public and international investment community. Sometimes referred to as ‘Gandasawit Utama’ (GSU), according to Aidenvironment, the Sitorus family has controlling stakes or management control in over two dozen of plantation entities. These stakes are estimated at over 360,000 hectares of land throughout Indonesia. One study has found that members of the GSU group are reportedly involved in clearance of large tracts of peatland.

A possible coalition comprised of Federal Land Development Authority of Malaysia, FGV, GSU and EHP, jointly controlling over 1.2 million hectares, would represent a huge development in the plantation industry. Given the environmental record of its members, it is not known if they could access the certified sustainable palm oil markets, such as in the European Union.