Forest Heroes recently released a report, Green Cats: Scoring Palm Oil and Soy Companies on Forest Policies and Transparency, which analyzes the public pledges of 26 companies – 21 in the SE Asian palm oil market and five in the Latin American soy industry. It examines public disclosure on 18 different factors related to zero-deforestation and fair labor policies, and transparent implementation of those promises.

Effective implementation of deforestation commitments is arguably the most efficient method to mitigate the financial risks of deforestation. As demonstrated by the work of Chain Reaction Research, deforestation can lead to market access risks, stranded land, legal costs, reputational damage, increased financing costs and other adverse business impacts. The results of the Forest Heroes study might be included in risk assessment models for the palm oil and soy sectors.

The report found that there is significant room for improvement in both sectors. Differences between leaders and laggards are meaningful. Sime Darby is the median palm oil company, with a score of 56 percent. The median soy company score is Bunge with a score of 27.

As shown in Figure 1 (below), there was a large difference between the best and worst palm oil companies. Of the highest scoring companies, Agropalma, Daabon and Musim Mas are the only three producer members – from the group that was ranked – of the Palm Oil Innovation Group, an initiative of palm oil companies and NGOs that promotes responsible production practices above and beyond the criteria laid out by the Roundtable on Sustainable Palm Oil (RSPO). The lowest-scoring companies, Eagle High Plantations, Triputra Agro and Genting Plantations earned less than 20 percent of the available points. Of these companies, none applied forest policies for palm oil to global operations or excluded the sourcing of raw materials from natural forests, nor had they developed systems to trace palm oil to its point of origin within the supply chain.

Among even the highest-performing companies in this analysis, there is room for improvement. Furthermore, no company scored full points in a category requiring publication of detailed procedures for addressing suppliers who breach company policy.

The report reveals a gap between the policies on the books and the extent to which progress towards these goals is reported. More work on the ground is needed to monitor execution of these policies, as well as to provide financial analysis of the impact of non-execution on investors, if failure to implement their own policies exposes companies to material stranded asset risks or suspensions. A recent decision by Felda Global Ventures (FGV) to restore peat forest cleared after the August 2016 adoption of its NDPE policy – as required by RSPO’s rules – created both stranded assets – in the form of peat forest that they originally had expected to convert into productive land – and estimated USD 5.1 million minimum costs to Felda because required RSPO forest restoration penalties. 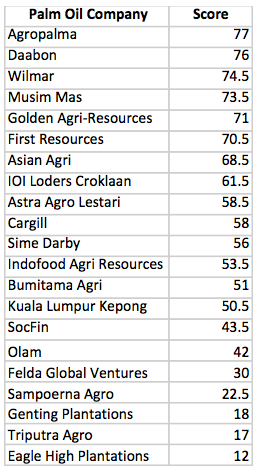 A recent report by Chain Reaction Research found that NDPE sourcing policies now cover 74 percent of Southeast Asia’s refining capacity, including many of the companies mentioned here. Companies that only grow palm oil and lack their own refining capacity may find it increasingly difficult to access the market without adopting and implementing their own policies.

As shown in Figure 2 (below), compared with the palm oil sector, the soy sector scored lower. Of the soy companies analyzed in the report, only Grupo Andre Maggi is a producer; the other companies included are traders and processers. Only ADM managed to earn half the available points, while Cargill, Bunge, Grupo Andre Maggi and Louis Dreyfus Company scored less than a third of the points available. Key areas for improvement include the traceability of soy products to their points of origin and the gap between pledged policies and progress toward meeting them.

Progress towards creating and implementing procedures for resolving non-compliance has been slow. Past research by Chain Reaction Research shows that a lack of transparency and traceability can create risks to investors, who may not be aware that they are exposed to stranded land risk in environmentally sensitive areas like Brazil’s Cerrado region. To date, soy producers can continue to deforest large strands of Cerrado savanna without facing the risk of losing market access. However, with growing support for the Cerrado Manifesto, including from 23 large consumer good companies, deforestation might rapidly put revenue and farmland asset value at risk.

Companies were scored based on their policies and achievements associated with implementation and transparency impacting deforestation and labor violations. For each of the criteria, at least one company scored full points, except for the criteria that requires the publication of detailed procedures for addressing suppliers in breach of company policy. Several companies received half points in this category. Although any of these companies have the potential to achieve a perfect score, Forest Heroes’ investigation reveals a significant gap between stated policies and reports on progress. To see the full list of companies and the methodology used to rank them, please click here.