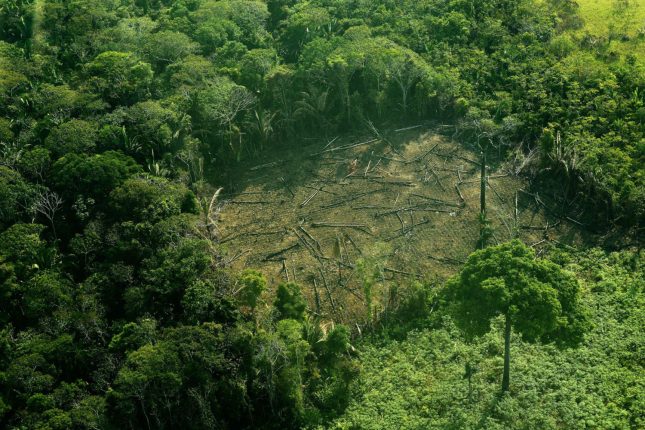 A group of U.S. Senators recently sent letters on February 4, 2019 to investors and asset managers urging them to take into account deforestation risks in their portfolios. The Senators, led by Brian Schatz, a Democrat from Hawaii, asked the financial actors to commit to pressuring companies in agricultural supply chains that do not adequately address deforestation risks.

The letters from the U.S. congressional members to the financial actors could be important for two reasons. For one, it could directly facilitate large institutions in the investor community to prompt companies to raise ambition in reducing deforestation levels. Second, the Senators’ letter could be the start of a broader ongoing dialogue between the U.S. government, investors, and industry about the risk of increasing deforestation globally and its connection to climate change. “It is our view that addressing risks from deforestation is in line with your fiduciary responsibility,” they wrote.

In CalPERS’ response to the Senators, which it shared with CRR, the state pension fund (the largest in the United States) listed its initiatives and milestones in limiting investment in companies tied to deforestation. For instance, in July, CalPERS updated its policy to include incorporating deforestation risks in investment decisions. In December, CalPERS sent letters to more than 60 companies about how they should include climate change risks in their business models. This communication included deforestation and risks associated with it. The CalPERS’ response to the Senators also noted that the pension fund will provide further details on its efforts to reduce exposure to deforestation on March 18, 2019. “CalPERS views forests as providing numerous benefits, including their key role as carbon sinks helping to mitigate climate change and in turn, protect CalPERS global investment portfolio,” wrote CalPERS. “Currently, forests are one of the best available ‘technologies’ to sequester carbon. Therefore, in addition to our focus on palm oil, we are also looking into other drivers of deforestation across various industries and commodities in our global portfolio.”

CalPERS also listed what Congress could do to help CalPERS and companies mitigate risks from deforestation. See graphic: 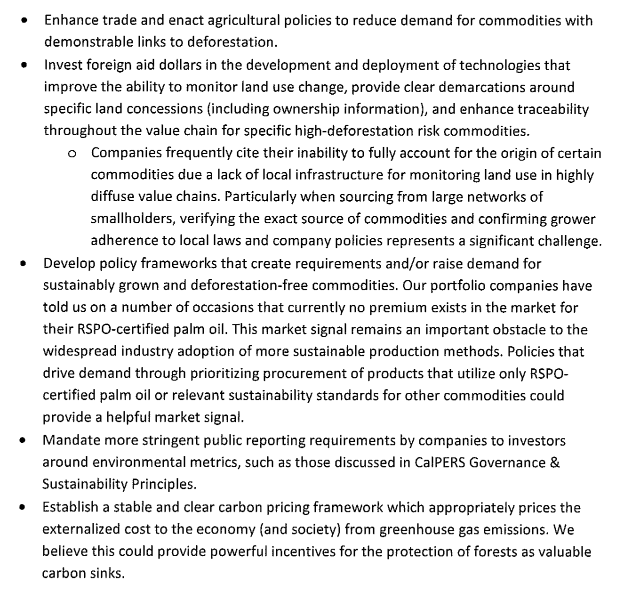 NGO Friends of the Earth (FoE) was instrumental in working with the Senators to raise awareness of the issue. “We very much welcome this effort by the Senators to put pressure on the world’s biggest money managers for their role in enabling the deforestation crisis,” Jeff Conant of FoE told CRR. “Companies involved in deforestation and related human rights abuses, and their financiers, have gotten off the hook with inconsistent voluntary guidelines and vague commitments to corporate social responsibility and ESG. A little pressure from lawmakers should help move things in the right direction – which is, ultimately, toward greater regulation of both finance and industry.”

However, the Senators note that the entire agricultural sector is responsible for 80 percent of global deforestation. In fact, cattle is the main cause of deforestation globally. Investors and financiers in companies all along commodity supply chains are becoming increasingly aware of financial, business, and reputational risks from being linked to forest loss. There are also legal ramifications for investors, too, as a result of illegal logging and human rights abuses that are associated with deforestation. The continued lack of transparency in sectors most at risk of deforestation, such as cattle (beef), oil palm, soy and timber, means that investors will likely continue to feel pressure from NGOs and lawmakers, who could call hearings on the subject or introduce legislation to pressure investors to act on deforestation.

4 Responses to The Chain: Limited Response from Financial Institutions to U.S. Senators’ Call to Tackle Deforestation