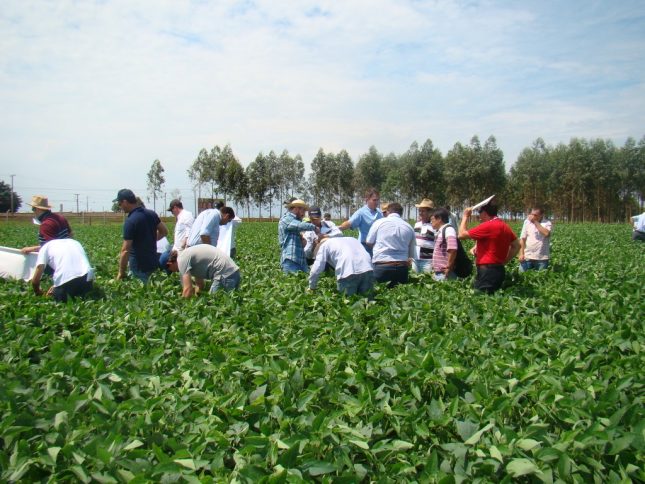 This report builds on Chain Reaction Research’s (CRR) company profile on BrasilAgro, published in November 2017. It showed that from 2012 to 2017, BrasilAgro had cleared 21,690 ha of native vegetation in the Brazilian Cerrado. BrasilAgro has faced the risk of losing clients with zero-deforestation commitments, as well as an overvaluation of its land portfolio. This update report shows the continuation of deforestation on BrasilAgro farms since November 2017, and the associated business and financial risks.

BrasilAgro’s diversified business model aims to produce value from both commodity production and the acquisition and transformation of ‘underutilized and non-productive land’. The company generates revenues by clearing and developing land and subsequently selling these rural properties.

As of Q4 2018, BrasilAgro has 215,137 ha in its portfolio, compared to 225,832 ha last year, spread over 11 properties (8 owned and 3 leased). Ten of the properties are in the Brazilian states of Maranhão, Piauí, Bahia, Minas Gerais, Goiás, and Mato Grosso. One farm is in Paraguay. As shown in Figure 1 (below), BrasilAgro’s Brazilian farms are located in the Cerrado, the savannah biome that is home to unique biodiversity and traditional communities and that plays a crucial role in Brazil’s water systems. 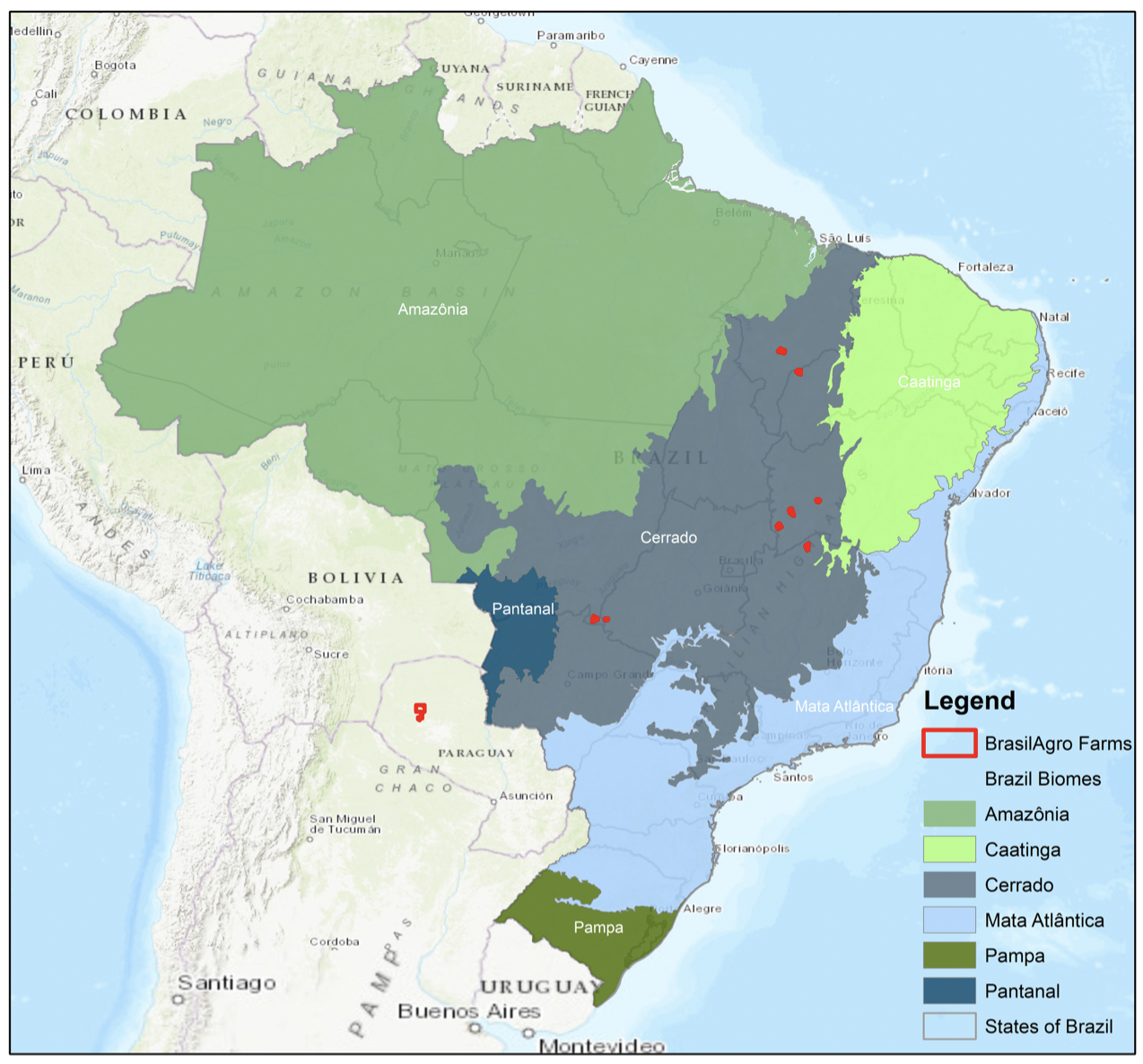 Source: BrasilAgro, Brazilian Ministry of Environment (MMA) and the Brazilian Institute of Geography and Statistics (IBGE)

BrasilAgro is increasingly focusing on the development and sale of its farmland. The company aggressively acquired farmland between 2006 and 2010, while farm sales and land transformation have increased in the last five years (Figure 2). Thirty-three percent (70,995 ha) of BrasilAgro’s land portfolio is undeveloped, compared to 94 percent in 2006 (Figure 3). 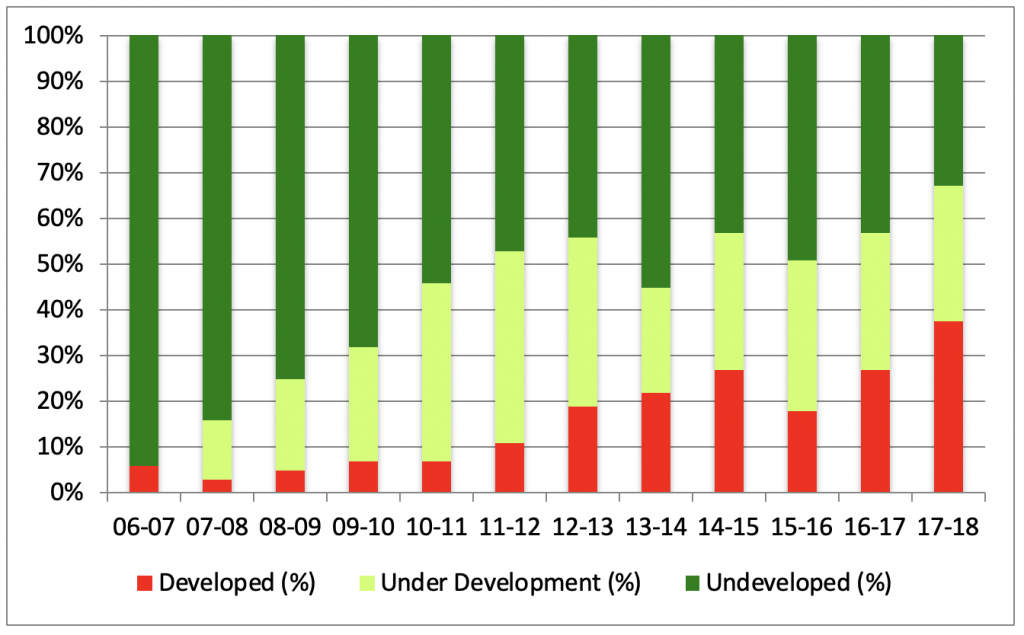 The company has not acquired any new land in the past year.

Since November 2017, BrasilAgro has cleared 1,508 ha of native Cerrado, mostly on its Chaparral and Jatobá farms in Bahia.

Since November 2017, BrasilAgro cleared 1,491 ha of Cerrado vegetation on Fazenda Chaparral (Figure 4). This action comes on top of the 12,672 ha of the farm’s native vegetation cleared between 2012-2017. The Brazilian Ministry of Environment categorized all native vegetation as Wooded Savanna, which falls under the forest category. 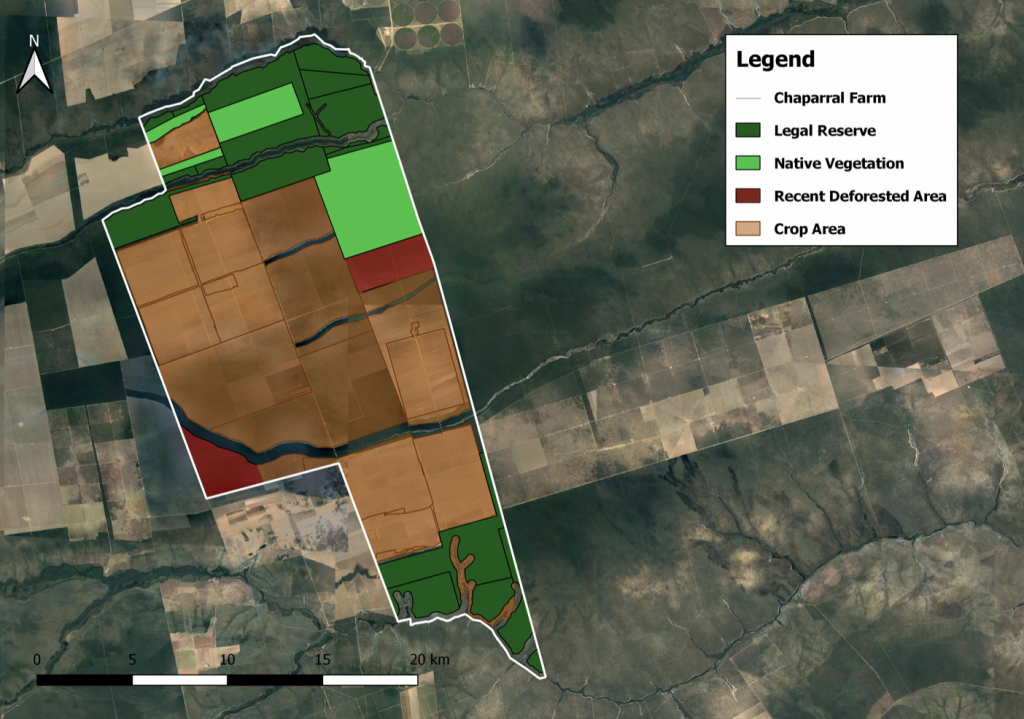 The company intends to clear all remaining native vegetation outside of the environmental reserves by December 2018. This entails another 3,417 ha of native Cerrado vegetation. An unpublished environmental impact study from 2014 presented a plan for the deforestation of the Chaparral farm in three phases (Figure 5). In an interview with Rede Social de Justiça e Direitos Humanos (REDE) in October 2018, a regional manager confirmed that the deforestation is currently progressing according to schedule. It is expected to be finalized by the end of this year with the removal of the remaining 3,417 ha of native vegetation.

In 2018, BrasilAgro sold 9,784 ha of land on Fazenda Jatobá for BRL 177.9 million (USD 48.3 million) to JH Sementes, a Brazilian seed company. In an interview with REDE in October 2018, BrasilAgro’s regional manager indicated that the Jatobá farm is in an excellent location with abundant water, strategic logistical access and robust productivity. These factors have facilitated the sale of part of the farm.

Figure 6: Deforestation at Fazenda Jatobá in 2018 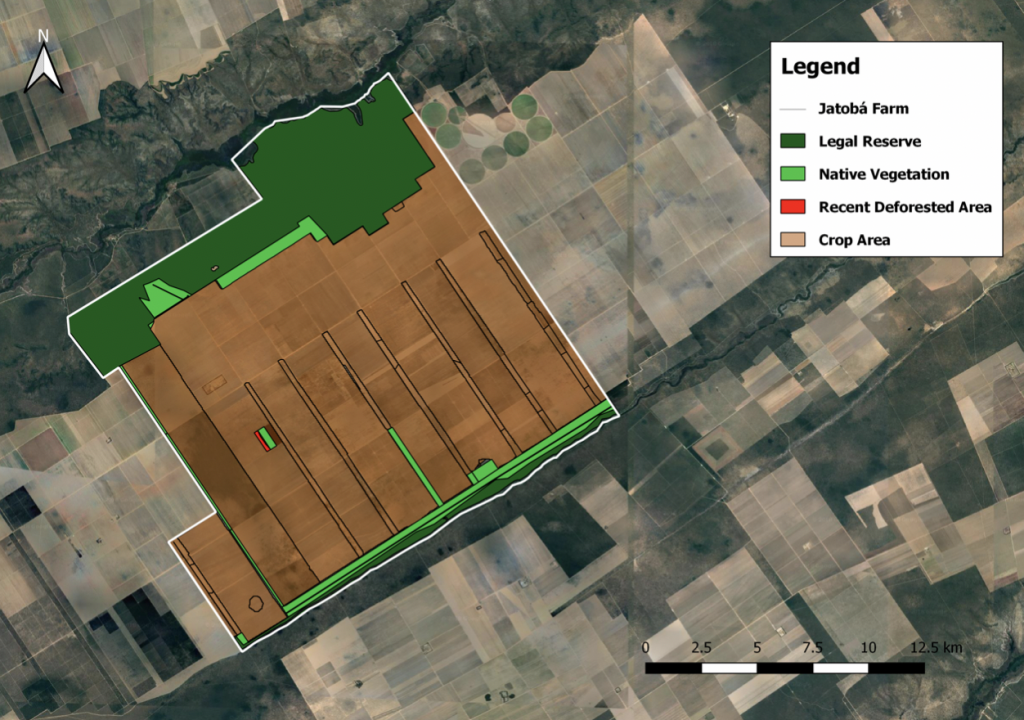 Some 1,652 ha of native vegetation is still left on the farm, excluding the legal reserve. According the regional manager of BrasilAgro in Bahia, the company plans to clear all native vegetation by the end of November 2018. In October 2018, 40 laborers were preparing the farm for deforestation.

In response to a draft version of this report, BrasilAgro indicated that all land clearings are taking place in accordance with Brazilian legislation. However, ongoing and planned deforestation at BrasilAgro farms could materialize in a variety of business risks.

In 2017, CRR identified that BrasilAgro faced the risk of losing access to clients because of its sustainability impacts. ADM stopped sourcing from BrasilAgro after 2016, and is no longer listed as one of BrasilAgro’s main clients in its most recent financial accounts. It is unconfirmed whether ADM’s zero-deforestation policy and BrasilAgro’s deforestation contributed to this decision.

BrasilAgro’s farms in the Matopiba region are also susceptible to a variety of operational risks. These include:

As a rural real estate company, BrasilAgro is highly susceptible to the risk of stranded land. Recent developments show that the company’s farms in Matopiba are particularly at risk of becoming stranded: 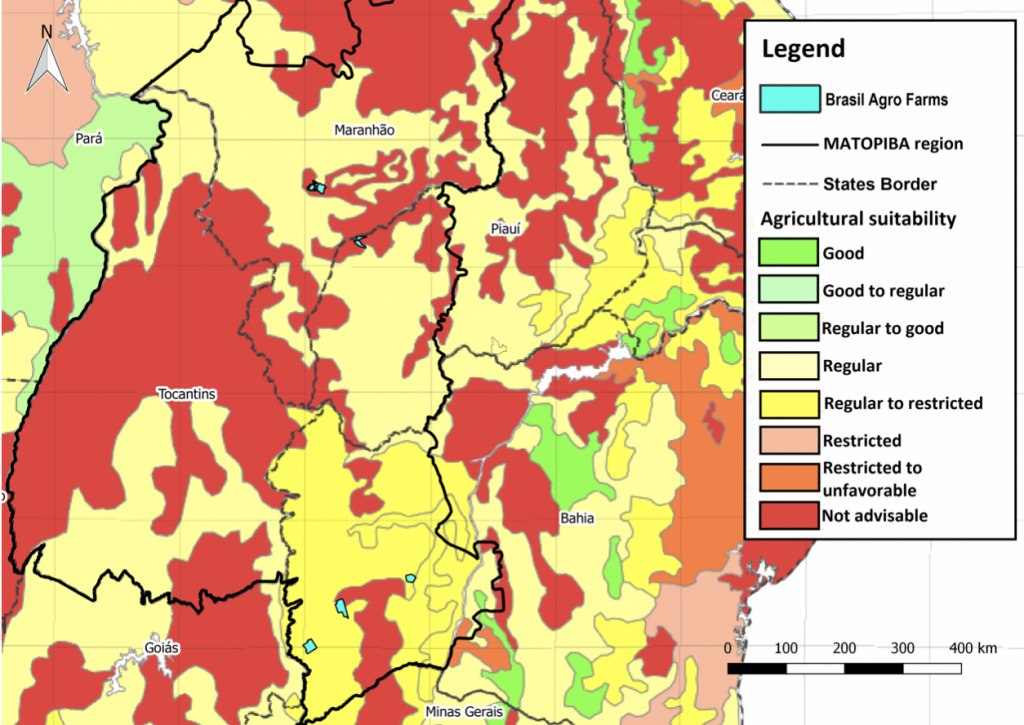 In the financial year 2017/18 (ending June 30, 2018), the planted area increased by 16 percent to 102,857 hectares, of which 19,787 ha was pasture land (for cattle). As productivity (ton per hectare) increased substantially (also due to better weather conditions), net revenues increased by 103 percent to USD 116 million. This growth was also due to higher results from land sales. Of net revenues, 10 percent was due to realized gains on land sales and 26 percent was due to change in the value of biological assets (the value increase of soy, sugar, other grain and cattle growing/feeding on the land). Thus, 64 percent (USD 74 million) was due to farm sales. Of this USD 74 million farm sales, 56 percent was generated in sugar cane and 40 percent in soy/grain.

BrasilAgro’s continuing clearing of forests may lead to revenues-at-risk of BRL 55 million (USD 14 million). If CRR applies a gross/EBITDA margin of 20 percent on these sales, a structural loss of sales to large customers with zero-deforestation policies would lead to an EBITDA reduction of USD 2.8 million.

This would translate into a loss of USD 20 million in value (at DCF basis; WACC 10 percent). The potential reduction in EBITDA also affects the net debt/EBITDA ratio (see section on financing).

BrasilAgro faces the risk of reduced productivity of land due to drought, particularly in Matopiba. Also, social conflicts due to water can lead to value loss. In 2013, BrasilAgro had to contend with severe droughts at its Northeast farms reducing 31 percent of soy yields. If this risk becomes more structural, a DCF calculation should include a reduction of BrasilAgro’s revenue estimates.

The four farms of BrasilAgro in Matopiba have in total 67,846 ha of arable land (total of first and second crop), or 66 percent of the total in BrasilAgro.

Figure 10: BrasilAgro: Arable land in Matopiba region versus the total

The next table shows two scenarios for crop yield reduction in Matopiba — 30 percent and 50 percent (production proxy = hectares of arable land). A 30 percent yield reduction on the Matopiba farms could lead to a 20.5 percent negative impact on the overall production of BrasilAgro. The negative impact on net revenue and EBITDA could result into a DCF-based value decline of USD 21.3 million. A negative yield impact of 50 percent would shave off USD 35 million of value.

As mentioned above, BrasilAgro faces the risk of stranded land or potential reduction in value as investors may show less appetite for recently deforested land in the Matopiba region. If a value reduction of 25 percent versus current market estimates occurs, the current market value of land (estimated by an independent party, Deloitte Touche Tohmatsu) could be negatively affected by BRL 212 million, or USD 55 million (see table below). The potential negative impact per share is BRL 3.72, or 13 percent of the net asset value per share (BRL 28.27 at 30 June 2018; see valuation section at the end of this study). A 75 percent value reduction scenario for the Matopiba farms would bring about a negative impact of USD 163 million or BRL 11.2 per share.

BrasilAgro is 85 percent financed by equity (market value) and 15 percent by net debt (see table below). As the company holds a high amount of cash, gross debt amounted to USD 71 million end of June 2018 (financial year 2017/18).

Figure 13: BrasilAgro: Financing of the company

Cresud, a company listed on the Argentinian stock market, control’s 41 percent of BrasilAgro’s shares. Cresud, whose core activity is crop farming and property development in agricultural areas, has no policies on deforestation. CRR’s report on BrasilAgro in 2017 investigated Cresud’s shareholders base: Santander Rio and BNP Paribas, which have zero-deforestation policies, have sold their equity stakes while HSBC Roberts Administradora de Inversion (Argentina) still holds a position of 18 million Argentinian Pesos. HSBC has no deforestation, peat or exploitation commitment for only palm oil.

Other shareholders in BrasilAgro made some changes in their positions in the last 12 months. Deutsche Bank, JP Morgan Chase and Banco Citibank are no longer on the list, while Kopernik and Dimensional Fund Advisors increased their positions.  These investors have no policies on deforestation. Autonomy Advisors (9.6 percent of the shares) also has no ESG or deforestation policies.

As mentioned above, market access risk could reduce EBITDA by USD 2.8 million. Pro forma net debt/EBITDA 2018/19 would amount to 1.0X (versus 0.9X in the base scenario; see table). As gross debt and net debt (USD 71 and 37 million respectively) is relatively low versus the market value of land properties (BRL 1,26 billion, or USD 324 million), bond holders and banks seem to face a low risk with their lending.

The relative valuation of BrasilAgro appears low with respectively 64 and 48 percent discounts in P/E and EV/EBITDA versus the average of a peer group. Note that BrasilAgro’s book gains on land impact the comparison. In P/BV, which is the stronger comparison base in view of the ‘land appreciation’ business model of BrasilAgro, the discount is still 40 percent.

Instead of using book value per share (based on historical acquisition price plus additional investments in the land), the net asset value per share (NAV/share) provides an even better insight into the value of the company. This concept is based on market price/fair value estimates. For this land valuation, BrasilAgro hired an independent party, Deloitte Touche Tohmatsu (as also SLC Agricola does). On June 30, 2018, the market value of the portfolio was estimated at BRL 1.26 billion, the basis for the NAV/share calculation on September 30, 2018, which amounted to BRL 28.27. The current share price of BrasilAgro (BRL 15.3 on 23 Nov 2018) is 46 percent below the NAV/share. This is in stark contrast to SLC Agricola, for which the share price (BRL 51.18) is approximately 15 percent above its NAV/share.

It is possible that the BrasilAgro investors have already taken into account the substantial share of the value risks associated to severe climate change effects for the Matopiba farms and BrasilAgro’s market access risk due to ongoing deforestation in the vulnerable Cerrado biome. Other reasons for the low valuation may be:

Note that the value losses per share in a mild and severe scenario are respectively 43 and 98 percent of the share price of BRL 15.3.