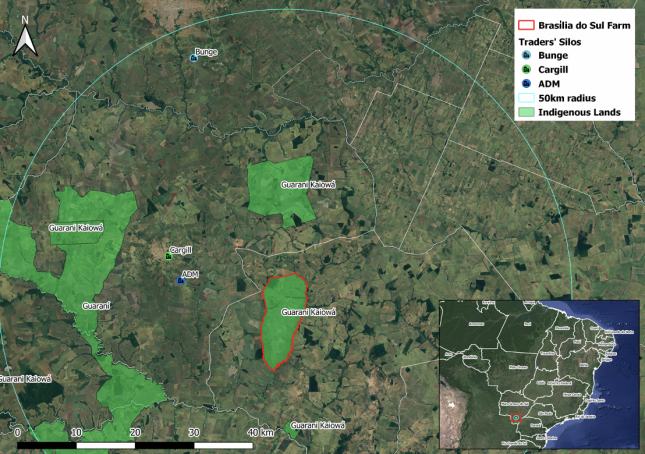 Cargill and Bunge, the world’s two largest traders of Brazilian soy, have been recently linked to a contested farm in Brazil, connecting the companies to human rights violations of traditional communities. Earthsight and De Olho nos Ruralistas, two non-profit organizations in the UK and Brazil, recently found that Cargill and Bunge are sourcing soy from Brasília do Sul, a 9,785-hectare soy farm in Mato Grosso do Sul (MS) (Figure 1) that is currently being disputed.

The two trading giants are the major exporters of soy to the European Union and the UK. Between 2014 and May 2022, Bunge reportedly exported over 17 million metric tons (MT) of soy to the EU, with Spain, France, and Germany as the major recipients. Cargill exported more than 13.7 million MT, with top destinations Spain, the Netherlands, and the UK.

Figure 1: Brazilian contested farm Brasília do Sul with nearby facilities of Cargill and Bunge 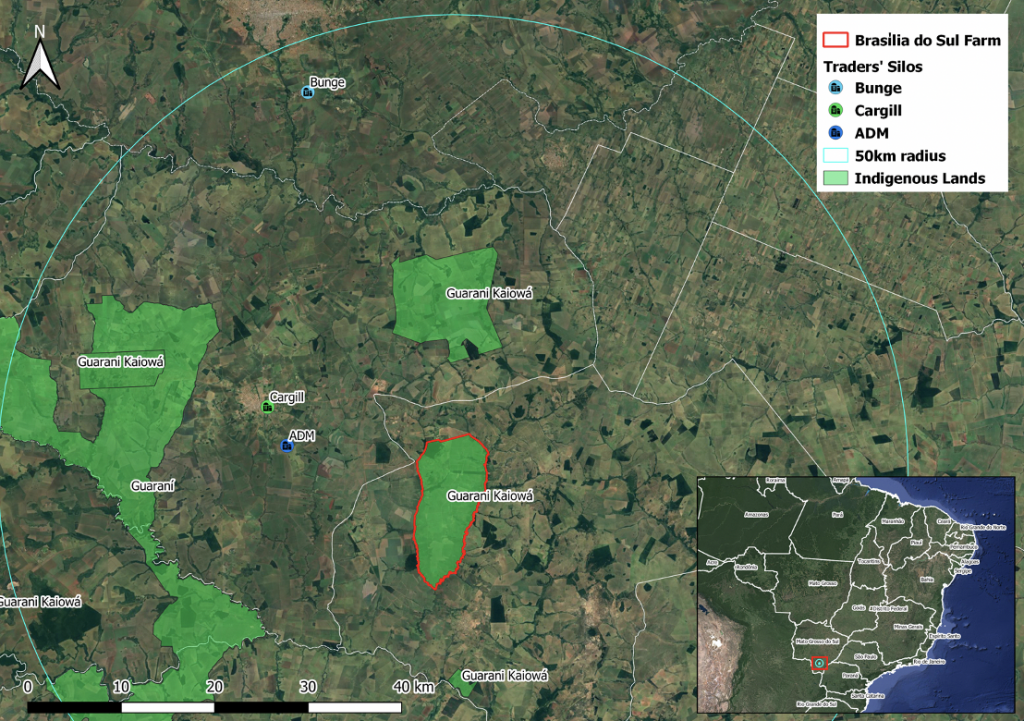 Source: AidEnvironment, based on INCRA, Sicarm 2022, Funai 2020. Note that ADM was not mentioned in the investigative research.

The disputed land is allegedly stolen from a traditional community called Guarani Kaiowá, the original residents of the ancestral land Takuara. They were displaced decades ago. Funai, the Brazilian federal agency tasked with protecting indigenous rights, has recognized Takuara as a traditional indigenous land, making agribusiness activity on it illegal according to the country’s constitution. However, none of the court rulings issued over the years have been conclusive, and final demarcation of the area is still under consideration. Apart from land grabbing, the contested farm is also linked to the murder of Guarani Kaiowá leader Marcos Veron.

The findings are particularly important because of upcoming EU regulations, which will put forest-risk commodities such as soy and cattle under increased scrutiny for deforestation and human rights violations. The EU Sustainable Corporate Governance (SCG) Directive, which is aimed at improving company law and corporate governance, has been in a proposal status since February 2022. Under this legislation, commodity traders such as Cargill and Bunge are subjected to mandatory due diligence on addressing adverse human rights and environmental impacts in their global value chains. Human rights issues will also be covered under due diligence requirements of the proposed EU Deforestation Regulation, which seeks to curb both legal and illegal deforestation and forest degradation that result from EU consumption and production. While the requirements of the SCG initiative “go beyond the requirements of the deforestation regulation, they apply in conjunction.”

The Earthsight and De Olho nos Ruralistas investigation also underscores the importance of EU member states’ implementation and control of non-compliance regarding human rights violations under upcoming legislation. For instance, as currently framed, the EU Deforestation Regulation’s human rights approach is based solely on the laws of producer countries and does not require meeting demands of international declarations and conventions on human and labor rights. Cargill, which confirmed a supplier relationship with the contested farm, pointed to compliance with Brazilian law in response to the allegations: “We have confirmed that the process to demarcate indigenous land in the mentioned area of Brasília do Sul farm is not regulated yet, so there’s no illegality on the local produce.” This response (“human rights violations may have been found, but our sourcing is not illegal”) could undermine the effectiveness of the upcoming regulations. As Earthsight says: “Cargill could have adopted a do-no-harm policy and cut ties with any farms involved in unresolved land disputes with indigenous and other traditional communities, instead of clinging on to misguided legal interpretations and making a mockery of its own human rights commitments.”

Previous CRR research highlighted the uncertainty of how implementation and enforcement of the upcoming EU legislative initiatives will develop in practice. For instance, for the EU Deforestation Regulation, there are minimum requirements for compliance checks. Moreover, it lacks an obligation for a public list of operators and traders found in breach of the Regulation. Such a list would provide a strong incentive for compliance, since it would detach prosecution measures from national enforcement agencies’ willingness to apply penalties, increase transparency, and possibly serve as a deterrent for non-compliant companies.

The case also calls attention to the stronger traceability requirements under the upcoming legislation. The contested farm Brasília do Sul was also found to indirectly supply, through intermediaries, Bunge’s processing unit in Dourados. In response, Bunge stated it “does not have Brasília do Sul farm in its supplier data base.” This statement is open for interpretation and could also imply that Bunge does not manage to trace soy back to the contested farm through a web of intermediaries. In 2022, the company reported that it could monitor 64 percent of its indirect volumes in priority regions. If the EU Deforestation Regulation maintains the geolocation requirement as it currently is (back to the “plot of land”), the origin of these supplies would be attested. Companies such as Bunge would have to monitor their entire supply networks, revealing connections between commodity production and socio-environmental misconduct.

The EU financial sector is not directly affected by the EU Deforestation Regulation, but, indirectly, financers would likely be affected by financial risks in their shareholding, bonds, and loans. These risks include value risks, as well as reputation risk. Bunge and Cargill both receive financing from EU (and UK) financial institutions which are committed to report under the Sustainable Finance Disclosure Regulation. Since 2017, these two companies have received 33 percent of their identified financing from banks and investors in Europe, of which two-thirds are from the EU-27. Of the total identified financing, 44 percent originates from revolving credit facilities. Within the top 10 financers of Bunge and Cargill, BNP Paribas is the largest. Other European financers in the top 10 include Deutsche Bank, HSBC, Barclays, and ING. All these financers have various policies on sustainable financing and may feel the pressure to engage on the allegations identified above.