Analysis conducted by CRR partner AidEnvironment shows that Indonesia remains the deforestation hotspot in the Southeast Asia, based on concession data for the first six months of 2022. Data shows that the top 10 deforesters together contributed to 8,100 hectares (ha) of forest loss, and all the concessions featured in the top 10 list are located in Indonesia. Two out of the 10 concession companies in this period are in Papua, three are in Sumatra, and the rest are in Kalimantan.

The 8,100 ha of forest loss among the top 10 deforesters represents a 43 percent increase compared to the first half of 2021. (The deforestation calculation for this Chain was done at concession level rather than at the group level). The higher number versus 2021 could be the result of higher palm oil prices and may signal a reversal of the trend that saw declines in deforestation in recent years. It is, however, too soon to tell, yet the data from the first half of 2022 will likely worry NGOs and others that have worked to curb deforestation in Southeast Asia.

The largest amount of oil palm-driving deforestation in Southeast Asia during 1H 2022 was detected on a concession belonging to PT Pipit Citra Perdana in Tana Tidung, North Kalimantan. A total of 1,600 ha of deforestation was found on the concession. PT Pipit Citra Perdana is a part of Pipit Group, a company owned by Kristianto Kandi Saputro and family. There is little known information on Kristianto Kandi Saputro, except for links to a coal mining company, PT Pipit Mutiara Jaya. A website which is now inactive showed that Pipit Group has several business lines, including engineering, logistic, mining, and palm oil companies. Pipit Group owns another oil palm plantation company called PT Nunukan Bara Sukses. There are no known links between Pipit Group and any supply chains, either those covered by No Deforestation, No Peat, No Exploitation (NDPE) policies or those supplying leakage markets. 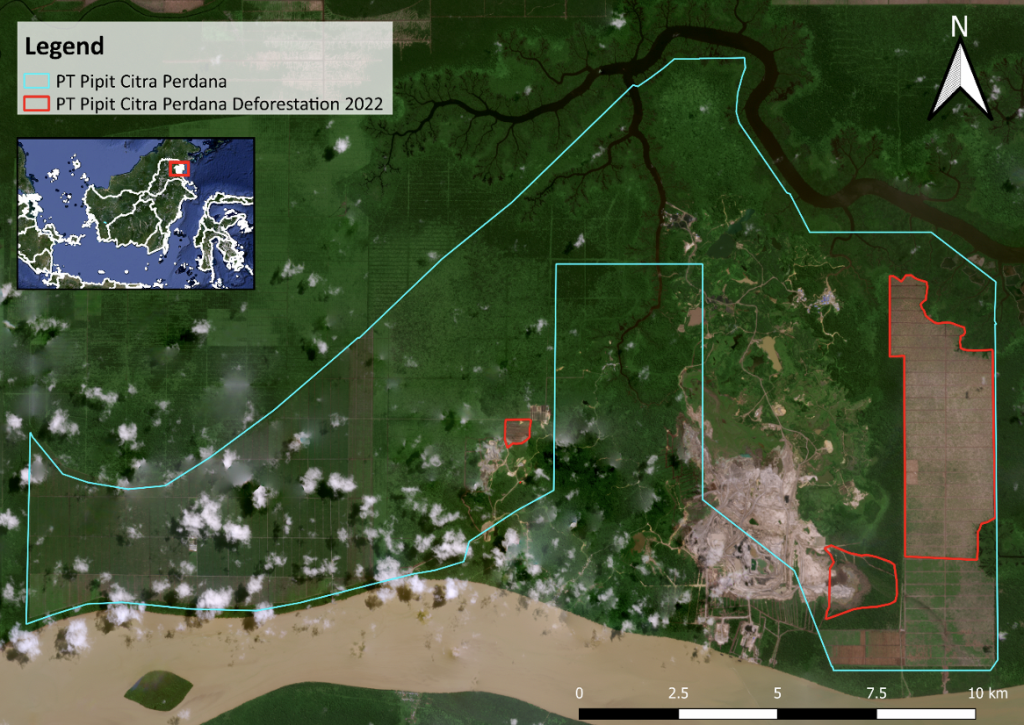 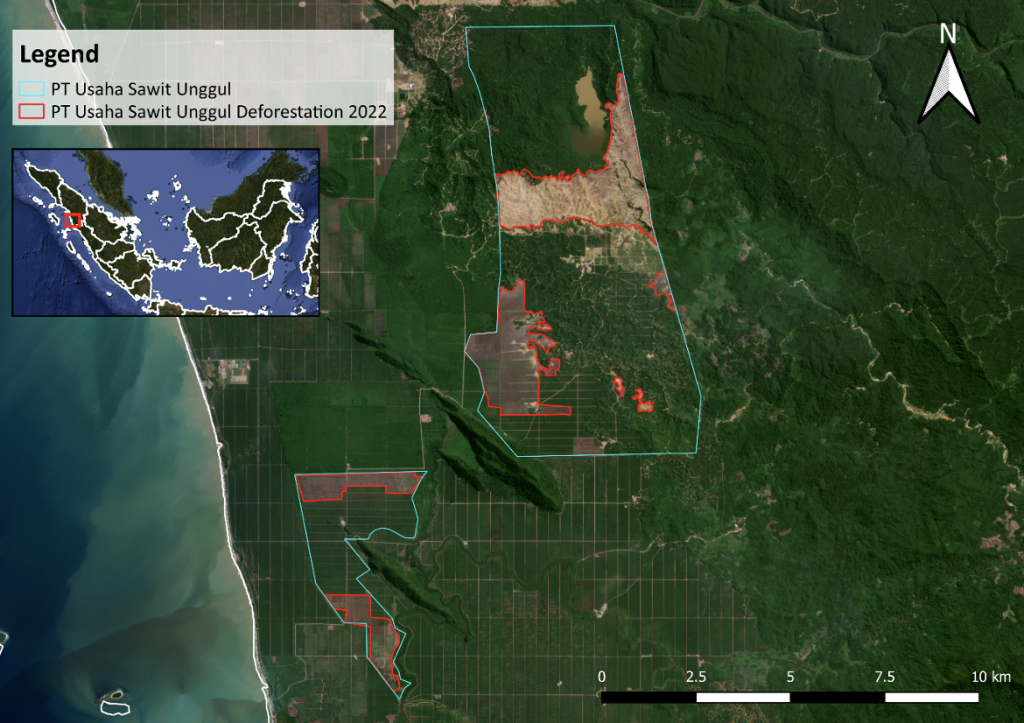 PT Permata Sawit Mandiri is third on the top ten list. The concession has appeared previously on CRR’s deforestation analysis and has long been on the radar of NGOs, having once been operated by the Malaysian palm oil company Genting. During 1H 2022, PT Permata Sawit Mandiri cleared approximately 1,300 ha of forest. The concession is in the Ketapang district in West Kalimantan and is now owned by an individual named Ikhsanudin. Public information on the owner of the company is limited and efforts by civil society organizations to engage the company have been unsuccessful.

CRR analysis of the concessions in Indonesia with the most forested orangutan habitat shows PT Permata Sawit Mandiri has 5,000 ha remaining, the tenth largest amount of habitat on any oil palm plantation in Indonesia. According to the 2017 orangutan population and habitat viability assessment, the concession has a population of 25-30 individual orangutans. In 2017, a press release from Indonesia’s Ministry of Environment and Forestry mentioned a collaboration between the government and PT Permata Sawit Mandiri to manage High Conservation Value areas, but there is no public information on the results of the protection effort. PT Permata Sawit Mandiri used to enter NDPE supply chains through the mill of the company Goodhope, but as of the end of January 2022, Goodhope no longer purchases fresh fruit bunches from the company. 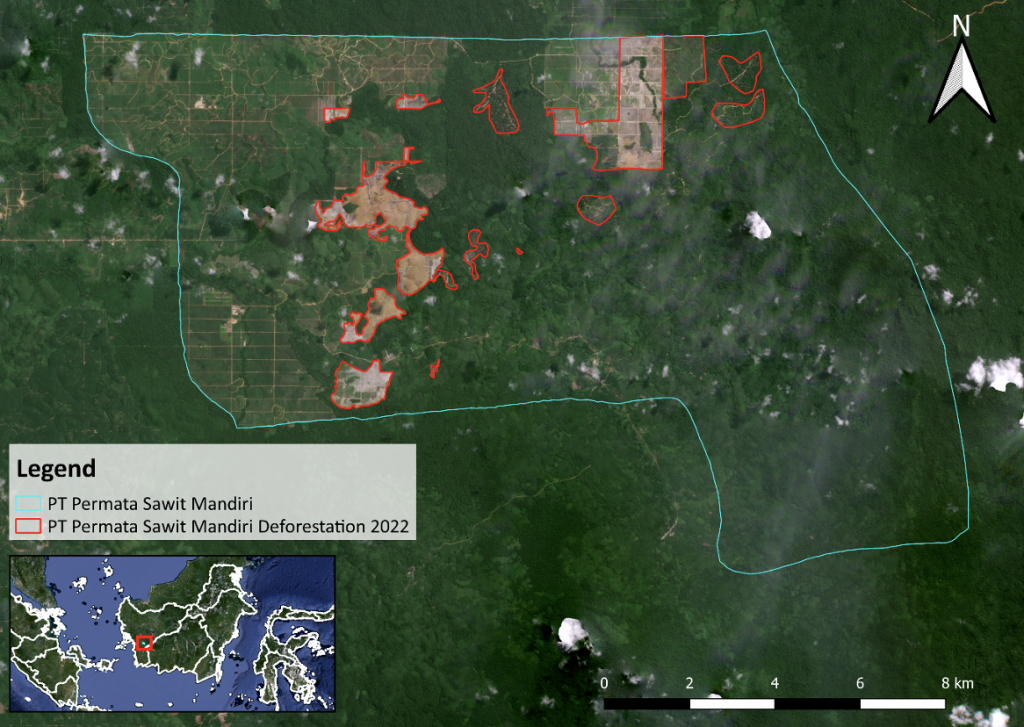 In fifth place is PT Inti Kebun Sawit in Sorong, Papua. In the first half of 2022, the company cleared 660 ha of forest. PT Inti Kebun Sawit used to be part of Kayu Lapis Indonesia. In 2020, the concession, together with two other oil palm plantations owned by Kayu Lapis Indonesia in Papua (PT Inti Kebun Sejahtera and PT Inti Kebun Lestari), was sold to Ciliandry Anky Abadi (CAA). Ciliandry Anky Abadi is a group company owned by Ciliandry and Wiras Fangiono, who are part of the wider Fangiono family behind Singapore-based palm oil company First Resources. First Resources is currently the subject of an RSPO complaint that stems from ownership confusion between the two groups and the affiliated FAP Agri. First Resources has consistently denied that the companies are linked, despite increasing evidence that they should be considered one company.

In addition to its deforestation, PT Inti Kebun Sawit has also been involved in a social conflict case with the indigenous communities in the vicinity of the concession. The concession is alleged to be within customary forests and was possibly obtained by the company without consent.

PT Sawit Sukses Sejati, located in Mandailing Natal, North Sumatra, cleared around 660 ha of forest between January and June 2022. Previously, the concession operated under the name PT Anugerah Langkat Makmur, which was owned by a Sumatran businessman, the late Haji Anif. PT Sawit Sukses Sejati acquired the concession from Anugerah Langkat Makmur in 2021.

The concession is now operating as PT Sawit Sukses Sejati, under Jalan Abesin Limited, a group company registered in the British Virgin Islands. The company does not appear to publish any public information, so there are no details available regarding its supply chain. This instance is not the first time the company has been accused of deforestation. Before changing its ownership and the name of the company, PT Anugerah Langkat Makmur was accused of violating government regulations by converting protected forest into an oil palm plantation in 2019.

In the next spot is PT Kartika Nugraha Sakti, which is also part of Bengalon Jaya Lestari. The concession cleared 570 ha of land during 1H 2022, all of it peat forest. AidEnvironment’s database has not recorded the presence of palm oil mills under the group company until now. Information obtained from Indonesian notary acts shows that the group company belongs to three individuals: Cindra Darmanto, Iskandar Riyanto, and Candra Gunawan. Audit documents say that PT Wana Jaya Abadi has a total landbank of 3,206 ha. It is unknown if PT Wana Jaya Abadi is linked to any NDPE supply chains.