On August 21, 2018, Malaysia-based Sime Darby Plantation Berhad (SDP) signed a Memorandum of Understanding (MOU) with China’s COFCO Group Co. Ltd. to cooperate on palm oil projects. Both sides plan to work together to conduct research on sustainable palm oil, and SDP is seeking to further penetrate the growing Chinese market. SDP and COFCO want to increase palm oil trade between the two companies. “This memorandum of understanding truly reflects our aspiration to be the leader in promoting the healthy benefits of palm oil and to produce certified-sustainable, high value palm oil products for the global market,” said Tan Sri Data Seri Mohd Bakke Salleh, SDP’s Executive Deputy Chairman and Managing Director at the signing in Beijing.

The collaboration is occurring against the backdrop of rising palm oil volumes heading to China, the world’s second largest importer of the product. “China is Malaysia’s key market for palm oil and Sime Plantation is proud to increase trade volumes and strengthen ties between Malaysia and China,” said Tan Sri Mohd Bakke. “We view our partnership with COFCO as a significant milestone in enhancing the commercial relationship between the two countries.”

China is not only a good market to gain more access to due to rising demand, but also because of its industry’s growing commitment to sustainability. China is seeing more of its companies join the Roundtable for Sustainable Palm Oil (RSPO). The number of Chinese RSPO members has grown from just a handful in 2011 to approximately 60 in 2016 (see figure below). The number continues to surge, but the overall percentage committing to sustainable palm oil is low. The RSPO is aiming for China’s uptake to reach 10 percent sustainable palm oil by 2020. Some companies in China, such as Cargill Investments (China) Ltd, FrieslandCampina China, and Sinograin, have sought sourcing sustainable palm oil to enhance their reputations with the belief that an improved brand name will boost profits. 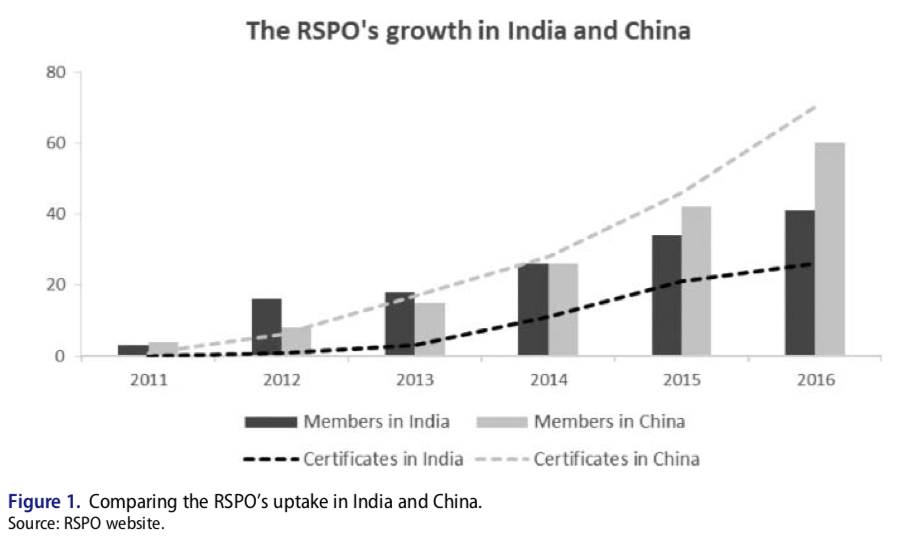 From a sustainability viewpoint, COFCO sourcing from SDP is a positive development. SDP has a no deforestation, no peat, no exploitation (NDPE) policy in place. SDP is the world’s biggest producer of RSPO-certified sustainable palm oil, and the company achieved RSPO certification for almost all upstream plantations in Malaysia, Papua New Guinea, and Solomon Islands, and 96 percent of its upstream operations in Indonesia. On August 23, 2018, SDP expanded its land in Papua New Guinea with its subsidiary purchasing Markham Farming Company Ltd. for USD 52 million. This deal gives SDP 6,110 hectares, two-thirds of which has been used for palm oil. In Liberia, meanwhile, the company has noticeably struggled. Last year, in its Q2 financial report, it reported a USD 48 million impairment due to weaker-than-anticipated growth in Liberia as result of a moratorium on new planting since 2014. In addition, dry weather lowering projected yield and the Ebola outbreak from 2014 through early 2016 contributed to weaker results. Upstream production, however, has rebounded, and the company is seeing fewer losses there. Still, in its earnings report for Q4, which ended June 30, 2018, the company reported an impairment charge of US 68.7 million for its assets in Liberia, contributing to sharp quarterly losses. Its profits before interest and taxes in Q4 declined by 22 percent, with lower crude palm oil prices and palm kernel prices also factors behind the drop. For the full financial year ending June 30, 2018, SDP saw a net profit of USD 417.6 million, down from USD 852 million during the previous 12 months.

Meantime, COFCO, while a member of the RSPO, does not have a palm oil-specific policy in place, but it says it is forming long-term relationships with suppliers “based on responsible and sustainable business practices.” Chain Reaction Research reported last year that COFCO does not appear to have a zero-deforestation policy that covers palm oil sourced from Indonesia. COFCO has said it plans to transition to sustainable palm oil by 2025. Deeper ties with SDP are likely part of its strategy to move toward sustainable palm oil. COFCO’s oil and oilseeds’ business has grown sharply in recent years, and its oils refining capacity is now at 6 million tons.

One Response to The Chain: Sime Darby Plantation Berhard Inks MOU With COFCO Group to Further Penetrate the Chinese Market