Significant shifts in soft commodity trade are continuing rapidly. China’s palm oil imports in August reached their highest level in six years at 590,000 tons. At current pace, China’s imports of palm oil are set to be the highest annual rate ever in 2019. This is likely another consequence of the U.S.-China trade war. As the trade war between Beijing and Washington has affected China’s soy volumes from the United States, China has looked for alternatives elsewhere, particularly soy from Brazil. Now, China is also including substituting palm oil for soy as a cheaper edible oil, while also increasing its use of palm oil for biofuels as a cheap alternative to crude oil. China said in August it will eliminate import tariff quotas on palm oil from Indonesia, paving the way for more imports.

The Indonesian palm oil industry sees the Chinese market as having the demand potential to offset expected sales declines elsewhere, particularly Europe, which is seeking to phase out the use of palm oil in biofuels. Higher imports will test sustainability commitments among Chinese traders and retailers.

China, Indonesia’s second largest buyer of palm oil, is expected to import 6.7 million tons of palm oil in 2019, a 6.3 percent increase versus last year and triple levels seen in the early 2000s. China National Grain and Oils Information Center says that imports will jump to 7 million tons for the year starting in October. Over the summer, China’s imports from Indonesia rose by 30 percent year-on-year. Imports from Malaysia have also increased significantly. China has so far imported mostly refined products, which have been covered by refiner NDPE policies despite the lack of sustainability demands from Chinese end-users. If China now starts importing significant crude palm oil volumes, that could be a major factor in the leakage market. 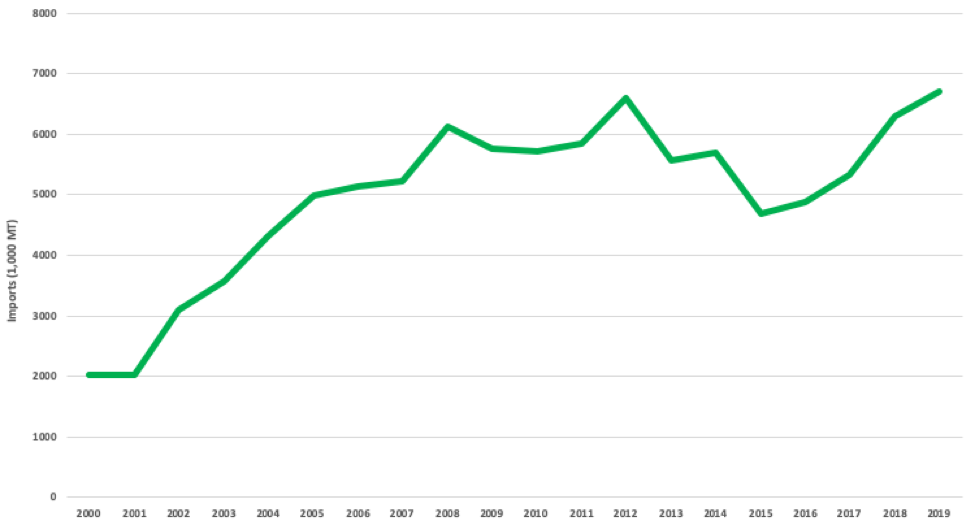 Montty Girianna, Indonesia’s deputy for energy in the office of the coordinating minister for the economy, says that the industry will look to increase its yields by being more efficient through better technology rather than by clearing more land. On the Chinese side, companies in the palm oil supply chain have lagged other markets in joining certification schemes such as the RSPO or developing zero-deforestation policies. However, in recent years, there has been a sharp increase in Chinese companies joining the RSPO along with more initiatives to build a “sustainable” palm oil supply chain in China. There are now 117 Chinese companies as part of the RSPO, double 2016 levels and up from only a handful in 2011. Key palm oil players in China include AAK, Mars, L’Oreal, COFCO, state-owned China Grain Reserves Corporation, and Cargill. COFCO, a major trader of agricultural commodities and one of the most visible Chinese companies in the soft commodity trade, has been a member of the RSPO since 2012. Yet, though the company has a commodity-specific commitment for soy, it does not have one for palm oil. As CRR has previously reported, COFCO has yet to put in a zero-deforestation policy that covers palm oil sourced from Indonesia. Still, COFCO says it is forming long-term relationships with suppliers “based on responsible and sustainable business practices” and has said it plans to transition to “sustainable” palm oil by 2025.

As of last year, only 1 percent of imported palm oil could be labeled as “sustainable” by RSPO standards, and the RSPO says certified palm oil uptake will reach 10 percent by 2020. On the other hand, an overwhelming majority of Chinese refineries (86 percent) are covered by NDPE policies. As CRR noted in a report in November 2017, China imports mostly refined palm oil, which falls under NDPE requirements.

China’s imports of Brazilian soy drop, but poised to rebound

As China imports more palm oil, it has reduced purchases of soy from Brazil. This trend is partly due to relatively weaker palm oil prices compared to soy. It is also due to weaker demand from the outbreak of African swine fever, which has lessened the need for soy used as hog feed. China’s imports of soy have been closely watched as volumes have risen sharply since middle of last year, when Beijing slapped tariffs on U.S. soy imports in retaliation for tariffs on Chinese goods. The rise in Brazilian soy exports to China has increased deforestation risks for companies operating in Brazil, particularly in the Cerrado.

China imported 40 percent less soy in August compared to the same month a year ago. So far in 2019, Brazil’s exports to China dropped by 14 percent versus the same time in 2018, cutting total Brazilian export volumes by 9.5 percent. Despite the decline, China still takes in 77 percent of Brazil’s soy exports, a sign that Brazil is heavily reliant on China for soy sales and will increase volumes after the African swine fever is contained and the economics of the soy market are more favorable for buyers. COFCO says that Brazil’s soy output will reach 122 million tons for 2018-19, up 3.3 percent compared to the previous year. In a sign that COFCO is betting on growth in Brazil, the country is its main market, now home to 7,500 of its employees, 68 percent of the company’s total.

Investors will keep attention on future shifts in trade flows to monitor deforestation risks. Global trading dynamics for soy and palm oil are certain to continue to change again based on volatile price dynamics and changes in trade policy, causing deforestation risks to fluctuate on a regular basis for companies operating in soft commodity markets.