SLC Agricola, the largest listed soybean producer in Brazil, cleared a total of 5,200 hectares (ha) of native vegetation in the first quarter of 2020. The deforestation took place on its Fazenda Parceiro farm at the same time the global economy began struggling with disruptions from the COVID-19 crisis. The farm is located in the municipality of Formosa do Rio Preto at the border of Brazilian states Bahia and Piaui, in the area known as Matopiba. The clearing of Cerrado native vegetation appears to be in line with Brazil’s Forest Code, but in violation of the zero-deforestation commitments of its customers and a large portion of downstream soy-consuming industries. 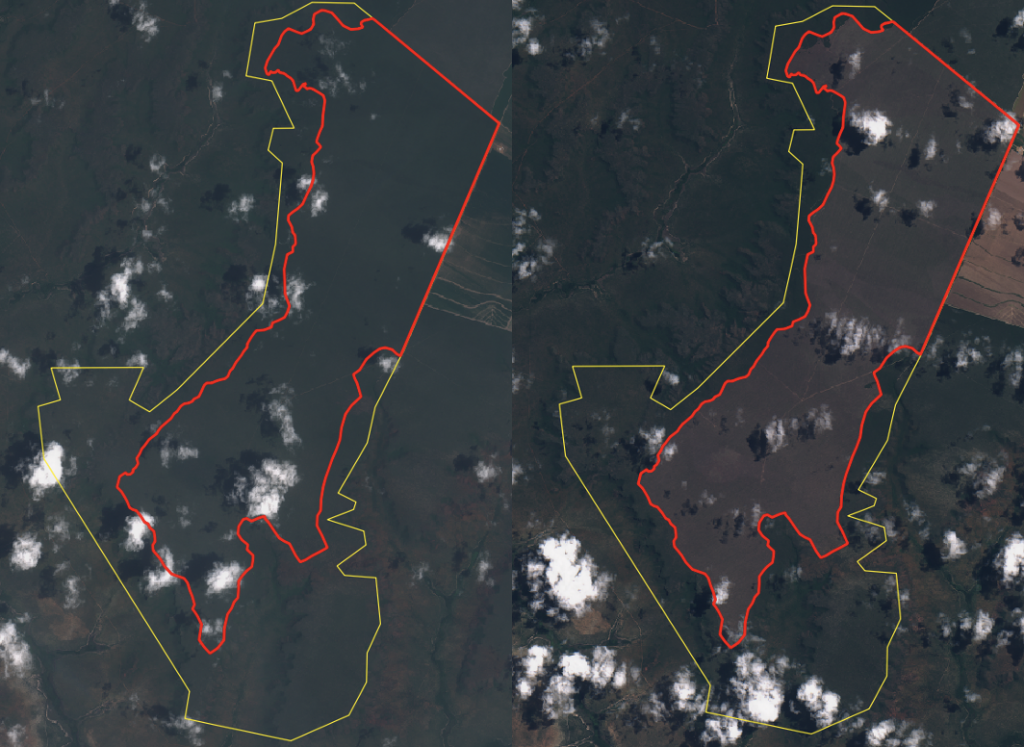 The new deforestation comes on top of 1,355 ha that the company cleared at the same farm in May 2019. It is part of the planned deforestation that was the center of CRR’s October 2018 report. The clearing further adds to the 39,887 ha the company deforested between 2011 and 2017. SLC Agricola applied for the environmental licenses for the clearing of 16,938 ha in 2018. The 6,000 ha recently cleared is categorized as wooded savannah, a forest type according to the Forest Reference Emission Level (FREL).

The new land clearing comes at a time that SLC Agricola is transitioning its business strategy from one of aggressive growth to an “asset light” model that reduces its exposure to the less stable production areas of Bahia and Piaui. The company has also increased its direct sales to export markets, with significant revenues coming from Asian countries such as Indonesia, China and Vietnam.

The company, however, remains dependent on a limited set of large customers. According to SLC Agricola’s 3Q19 financial statements, its main customers are Cargill Agricola S.A. (25 percent of revenues), Amaggi LD Commodities (24 percent) and Bunge Alimentos S.A. (14 percent). All three companies have made zero-deforestation commitments, and SLC Agricola’s recent clearing appears to be in direct violation of the principles of these policies.

Cargill’s policy on South American soy states that the company will “protect native vegetation beyond forests with the aim to end native vegetation conversion in the shortest time possible reconciling the production of soy with environmental, economic and social interests. This includes the Cerrado, Gran Chaco and Llanos.” In 2019, Cargill confirmed it sourced from Fazenda Parneiro and that the company would review the case further. It remains unclear whether Cargill has taken any further action in response to the clearing in 2019 or 2020. The company did not respond to CRR for a request for comment.

Amaggi LD Commodities is a joint venture between Amaggi, Louis Dreyfus Company (LDC) and Zen-Noh. LDC has one of the most ambitious zero-deforestation policies among the soy traders that are active in the Cerrado and has committed to “eliminate engagement in, or financing of deforestation throughout our supply chain, and conserve biomes proven to be of high ecological value, such as the Cerrado, Brazil, with the intent to discourage and eliminate conversion of native vegetation.” LDC confirmed to CRR that its policies also apply to its Amaggi LD Commodities joint venture.

Bunge has committed to achieving deforestation-free grains and oilseeds supply between 2020 and 2025. According to its October 2019 progress report, it has excluded four farms from its supply chain for planting soy over recent deforestation. It remains unclear whether it sources soybeans from Fazenda Parceiro or whether it has taken any steps in response to the 2019 or 2020 deforestation. Bunge did not respond to CRR for a request for comment.