The Chain: Traders Tout Progress in the Cerrado, But Deforestation Risks Remain High

A number of companies, including high-profile traders, have recently announced progress in efforts to reduce deforestation in the Cerrado soy supply chain. Chinese COFCO International aims to strengthen its traceability system to go deforestation-free by 2023, while seafood company Mowi has committed to sourcing only deforestation-free soy by next year. Meanwhile, members of the Soft Commodities Forum (SCF) – ADM, Cargill, Bunge, Glencore Agriculture, COFCO International, and Louis Dreyfus Company (LDC) – have issued their most recent six-month report, citing “significant progress” on traceability to farms of their direct suppliers.

While recent developments could enhance transparency in Brazil’s soy market, numerous challenges persist, both short term and long term, for reducing deforestation in the Cerrado, which has seen high levels since 2000. Higher exports of soy from Brazil and expected demand growth in the coming decade will likely further pressure land use. Moreover, traders have yet to sign the Cerrado Manifesto, and their commitments do not cover legal deforestation. All of these questions linger as the country’s overall deforestation rates rise, soy exports to China are near record highs, and companies are coming under increased scrutiny for their connections to deforestation-driven fires.

COFCO International, the trading arm of Chinese agricultural giant COFCO, said in its sustainability report last week that it is aiming for full traceability of its Brazilian soy purchases by 2023. COFCO International has enhanced its ESG goals in recent years, with efforts to reduce its exposure to deforestation risks. The company has reaffirmed its commitment to the Amazon Moratorium (banning the sale of soy on Amazon land deforested after 2008), and in early 2019, it released a statement at the World Economic Forum calling for more robust ESG practices in agriculture and confirming a commitment to zero deforestation. COFCO International has linked its USD 2.3 billion main credit facility to sustainability objectives, while also providing financial incentives to farmers to produce soy on already cleared land instead of clearing forested areas. It is also part of the SCF.

Despite COFCO International’s list of ESG targets, questions loom over whether the trader can trace supply to both direct and indirect suppliers; how the company will handle growing export volumes (it now trades close to 7 million metric tons per year in Brazil) while also curbing deforestation risks; whether its commitments and actions will cover legal deforestation; and whether the company’s shareholders with a history of programs and action to curb deforestation, International Finance Company (IFC) and Standard Chartered, may engage the company over deforestation.

The six top traders in the Cerrado  updated their progress in the 25 SCF priority areas last week. The following are the percentages of soy supply that each company can trace back to farms for direct suppliers in the 25 priority areas (see Figure 1 below): ADM 92 percent; Bunge 94.7 percent; Cargill 100 percent; COFCO International 100 percent; Glencore Agriculture 97.7 percent; and LDC 100 percent. The SCF also highlighted a partnership with Solidaridad in order to work with farmers in Correntina, Formosa do Rio Preto, Jaborandi, and São Desidério to help them use under-utilized land instead of deforesting areas for soy cultivation. 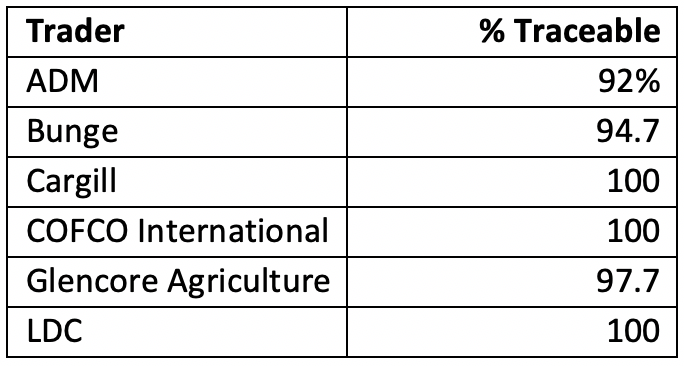 Alongside the SCF announcement, Cargill said in a separate statement highlighting traceability gains that 95.68 percent of its Brazilian soy comes from land that is deforestation-free and conversion-free, using 2008 as a reference point. It also updated developments in partnerships for its USD 30 million program to provide alternatives to farmers to reduce land conversion. Cargill’s reputation risk has risen as of late amid its possible links to deforestation-driven fires in its soy supply chain and Norwegian Grieg Seafood excluding the use of proceeds from its Green Bond to purchase soy from a Cargill subsidiary.

It is unclear how much the traders’ traceability measures in the 25 top priority municipalities can reduce deforestation risks. For one, NGOs have said that the SCF has been vague and ineffective in its concrete plans in curbing legal deforestation. The SCF has discussed in general plans for cattle intensification, rehabilitating degraded pastures, boosting soy productivity, and expansion in already cleared areas, but so far no specific strategy has been put forth. Second, the traceability measures only deal with direct suppliers. With complex soy supply chains, in which buyers may not exactly know which farm produced their soy, a focus on indirect supply chains seems increasingly meaningful. For instance, SCF member Glencore Agriculture already met SCF’s direct sourcing target, but the 57.1 percent of soy volumes indirectly sourced by Glencore in the 25 priority municipalities has a larger risk of being associated with deforestation in the Cerrado. Lastly, a major challenge for the industry, which the SCF admits in the report, is the massive growth in the country’s soy market expected in the next decade. “Despite the positive trend of reduced NVC [native vegetation conversion] and even lower participation of soy in that conversion, the growing demand for soy means Brazil will still have to increase production by 32 percent over the next 10 years,” the SCF says, adding that an additional 7 million hectares will need to be planted in Brazil by 2029.

Mowi, a Norwegian seafood company which sources soy from the Brazilian market, says it will not purchase soy that is traced to newly deforested areas by the third quarter of next year. Crucially, Mowi’s commitment covers areas that are legally deforested, unlike the major commodity traders’ pledges. In a blog post, Mowi’s chief sustainability officer Catarina Martins said, “This is a game-changer for the soy and feed industry supplying aquaculture.” She added: “With the current situation in Brazil, where the protection of the Amazon and the Cerrado is being deliberately dismantled, we must make sure that we do not trade with soy suppliers that contribute to this unacceptable development.”

Last year, amid the widespread fires in Brazil, Mowi considered completely cutting off imports from the country. Its latest announcement comes soon after Grieg Seafood’s action toward Cargill. Both measures reflect a growing risk for traders, as more end-users are concerned about having deforestation in their supply chains. The aquaculture sector is now using its market power to pressure traders and producers to adequately address deforestation, increasing the possibility of market access risks.

3 Responses to The Chain: Traders Tout Progress in the Cerrado, But Deforestation Risks Remain High