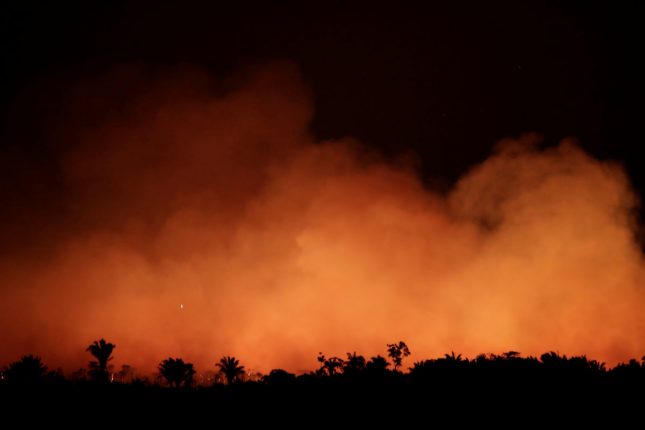 A new Greenpeace investigation finds that Brazil’s leading meat processor JBS and its top competitors Marfrig and Minerva purchased cattle from ranchers linked to the 2020 Pantanal fires as well as other environmental and social controversies in recent years. The meatpackers reportedly continue to source from some of these ranchers despite having been informed about the allegations.

Meanwhile, JBS moved the deadline for cleaning its Amazon supply chain from illegal deforestation to 2025 and in other biomes to 2030, in a climate commitment published on March 23, 2021. The deadline for zero deforestation in its global supply chain is 2035. Originally, the large Brazilian meatpackers including JBS, Marfrig, and Minerva had already committed in 2009 to not purchase cattle from Amazon-land cleared after signing cattle agreements.

In 2020, the unprecedented scale of fires destroyed more than 30 percent of the vast Pantanal floodplain. Although natural fires can occur in the Pantanal, officials stated that virtually all of the 2020 fires were of human origin. The combination of a severe drought and these fires, including reported deliberate use of fire by ranchers intending to clear land for cattle, led to a record-breaking extent of destruction. Areas affected include significant parts of indigenous territories and conservation areas. The Brazilian government introduced a 120-day moratorium on deliberate use of fire in the Pantanal and the Amazon in July 2020, but enforcement of the measures was ineffective.

With the cattle industry being the largest driver of deforestation in Brazil, the country’s meatpackers and their investors and financiers have come under greater scrutiny in recent years amid increases in forest loss. For more than a decade, numerous investigations by civil society organizations, researchers, and scientists have linked JBS and other meatpackers with deforestation and human rights violations in their supply chains. The investigations, as well as initial supply chain monitoring commitments by large meatpackers, focused on activity in the Amazon. While monitoring in the Amazon remains very limited, other important biomes seeing rapid destruction, such as the Cerrado and the Pantanal, remain largely uncovered.

Cattle in Brazil commonly move between multiple ranches throughout their lives, and this movement facilitates the most obvious form of cattle laundering through so-called “triangulation.” By passing cattle through intermediary ranches they also own, ranchers can obscure the actual origin of cattle from ranches linked to deforestation or human rights violations before sending them to slaughterhouses. Greenpeace identified 15 ranchers who are current or recent (since 2018) suppliers of JBS, Marfrig, and Minerva with links to the 2020 fires in the Pantanal, environmental violations resulting in embargoes, and/or irregularities in their property registration. Documented fires within case study boundaries burned at least 73,000 hectares (ha) in the period from July 1 to October 27, 2020, and often contributed to extensive burning outside of property limits.

The documented links between the case study properties and the meatpackers were mostly indirect: cattle from those properties passed through one or more other ranches before the final sale to the slaughterhouse. However, in most cases, the intermediary ranches were owned by the same individual. In response to the allegations, the three meat processors said they believe that all ranches that directly supplied them met their policy requirements at the time of purchase. Despite the alleged non-compliance, the companies did not indicate that they would take steps to review their approaches to sourcing in the Pantanal. Nor did they say they would review their supply bases for deliberate illegal use of fire.

More recent purchase records of JBS and Marfrig facilities show that controversial ranchers appear to remain part of the meatpackers’ supply base in recent weeks, despite having been informed about the allegations in early January 2021. For example, JBS’ Pontes e Lacerda facility (SIF 0051) received a cattle lot from Fazenda Vitória in Cáceres (Mato Grosso) on January 20, 2021; no further information is available to confirm the ownership of the ranch. Marfrig’s Várzea Grande facility (SIF 2015) received supply from Fazenda Vitória on February 1, 2021; further information confirms that the identity of the ranch owner – Adevair de Oliveira – is the same as the owner of Fazenda Recreio, also in Cáceres. Greenpeace documented some 2,990 ha of fires within the boundaries of Fazenda Recreio in 2020. Another ranch with the same owner has around 428 ha under embargo by the state environment agency due to deforestation violations between 2017 and 2020. While no direct trade between Fazenda Recreio and the slaughterhouses was documented, extensive cattle movements between the Recreio ranch and other ranches by the same owner, including to Fazenda Victória, have been identified by Greenpeace since 2018.

The scale of deforestation from cattle ranching is large. CRR conservatively estimated that for JBS, the company’s total deforestation footprint in Brazil since 2008 may be as high as 200,000 ha in its direct supply chain and 1.5 million ha in its indirect supply chain. Beef from the slaughterhouses identified in the Greenpeace report has been traced to various food processors and fast-food chains. Among the retailers are the two largest Brazilian supermarket chains, Carrefour and Grupo Pão de Acucar (GPA, Casino), both subsidiaries of French retailers. CRR has reported on the legal and financial risks of Carrefour and Casino due to deforestation in their supply chains. Earlier this month, a court case against Casino in France was launched. Indigenous people from Brazil and Colombia are suing the retailer over lack of supply chain due diligence and selling beef linked to deforestation and land grabbing. “As we make clear in the complaint, the demand for beef by Casino and Pão de Açúcar brings deforestation and land grabbing and violence, and the murder of indigenous leaders when they choose to resist,” said Luis Eloy Terena of the Terena people of Brazil and legal advisor at the Coordinator of the Indigenous Organizations of the Brazilian Amazon COIAB  in a statement.

Taking the French supermarket chain to court over deforestation and the loss of land and livelihood is a precedent under the 2017 due diligence law in France. BNP Paribas, an investor in and lender to Casino, recently announced it was committed to not financing companies that produced or purchased beef and soy from land in the Amazon that was cleared or converted after 2008. With its investments in Casino, BNP Paribas may be contradicting its ESG policies. In 2020, BNP Paribas had USD 1.4 billion exposure to Casino and its subsidiaries, as CRR noted in its report on the company. BNP Paribas is also part of a group of European financiers that account for 30 percent of financing for JBS and Marfrig.