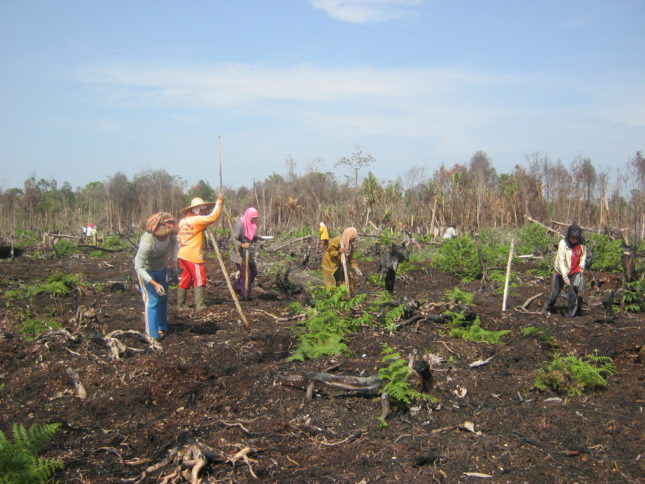 Plans by the Selangor State Agricultural Development Corporation (Perbadanan Kemajuan Pertanian Selangor/PKPS) to clear a peat swamp forest in Sabak Bernam District in the Malaysian state of Selangor risk the company’s presence in the supply chains of leading fast moving consumer goods companies (FMCGs) and traders/refiners. The plans have also triggered a coalition of NGOs to call for an immediate halt to the project.

PKPS is a government-owned corporation that develops agro-industry projects in Selangor. Although its primary source of income comes from oil palm plantation development, the company is also involved in livestock, rubber, and various other businesses.

PKPS plans to develop an agricultural plantation on an 8,000-hectare (ha) plot of land, which includes a 2,400 acres (~971 ha) of peat swamp forest. The scheme is called the Selangor Smart Agro Park project. The land is categorized as an Environmentally Sensitive Area and designated for protection, according to national and local spatial management plans. In addition to biodiversity loss associated with development of peat areas, the large-scale conversion is likely to contribute to flooding, land subsidence, and an increase in fire risk for adjacent peat swamp forests. Malaysia’s Department of Environment (DOE) indicates that PKPS started planning for the development in 2019, but its scoping study and the Terms of Reference (TOR) for the Environmental Impact Assessment (EIA) were rejected in January 2020. It is understood that the rejection was mainly because the development was not in line with the new national regulation prohibiting oil palm development on peatland and forest areas. In September 2020, PKPS repackaged the project as a palm oil mill and a coconut plantation. Then it started to log and clear the area in February 2021, without preparing or submitting an EIA.

In early April 2021, the DOE asked PKPS to immediately stop all activities and prepare and submit the mandatory EIA. The Coalition for the Protection of Selangor Forests remains strongly opposed to the project, as the “conversion of intact peat swamp forest into agriculture is not in line with Government policy to conserve all the remaining intact peat swamp forests.” The Coalition also believes the project “will jeopardise the reputation of Malaysian palm oil and other agricultural industries.”

Initially designed as an oil palm plantation, the 50 million Malaysian Ringgit (~USD 12 million) project was rebranded in September 2020, and PKPS now aims to plant the land with several cash crops, including coconut palms. However, NGOs and industry observers have raised doubts about whether the real purpose of the project is to plant oil palm, as the company still plans to construct a palm oil mill.

Even if PKPS continues the development and plants non-oil palm cash crops, it still risks supply chain exclusion. That it may have pursued developing a plantation for agricultural products other than oil palm highlights a shortcoming of commodity-specific NDPE policies and a loophole in implementation. If a palm oil supplier to companies covered by NDPE policies is found to deforest for oil palm, engagement policies will follow. The supplier will either stop deforesting and commit to recovery or be suspended. If the deforestation is for a commodity other than oil palm, it will usually fall outside of the scope of the policy. Two examples include:

Policies are starting to be applied across commodities. CRR previously highlighted United Malacca’s industrial timber concession in Sulawesi, where development has been put on hold after engagement by palm oil buyers and NGOs. The Malaysian palm oil supplier Samling was also suspended by several palm oil buyers at the beginning of 2020 over deforestation on its timber concessions in Sarawak.

If PKPS proceeds with this development, for oil palm or other products, its NDPE buyers will face pressure encouraging Sungai Terah and Syarikat Cahaya Muda Perak (Oil Mill) Sdn Bhd to suspend PKPS as an FFB supplier or risk violating their NDPE policies. Regardless of the commodities that will be grown on the land, peat development jeopardizes Selangor’s ecosystems and exposes the NDPE market to more reputational risk.