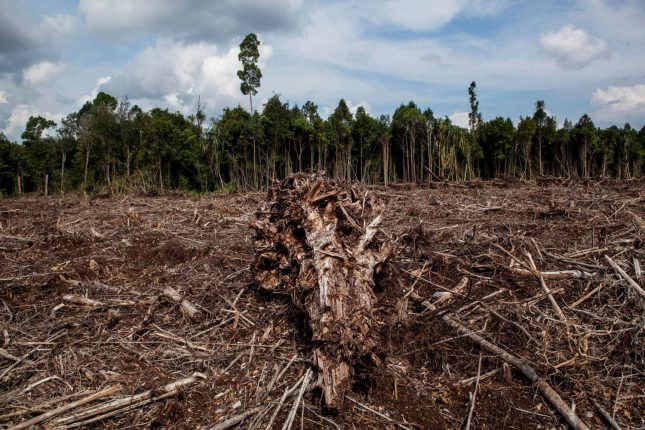 The Chain: Malaysian BLD Tops List of Major Deforesters in 2018

Ten growers in Malaysia, Indonesia and Papua New Guinea have been responsible for almost 16,000 ha of deforestation in the first nine months of 2018, according to an analysis by Chain Reaction Research (CRR) based on new data using satellite images from Aidenvironment. Most of the companies on the list of the top deforesters have downstream customers with No Deforestation, No Peat, No Exploitation (NDPE) policies. In 2017, the ten largest contributors deforested a total of 40,000 ha.

The biggest deforester this year has been the Malaysian company Bintulu Lumber Development (BLD), which cleared 1,702 ha of peat and 1,307 ha of peat forest on its plantation in Mukah division in Sarawak, Malaysia. BLD’s products appear in the supply chains of multiple traders and consumer goods companies, including AAK, ADM, Nestlé, Olam, IOI, Cargill, Louis Dreyfus Company, Lipsa and Reckitt Benckiser.

The second largest deforester includes companies owned by the Indonesian businessman Mr. Sulaidy. PT Citra Palma Pertiwi 2 and PT Borneo Citra Palma Abadi are among his holdings. Both plantations are owned by PT Bangka Bumi Lestari (BBL), in which Sulaidy has 99 percent of total shares, according to notary acts. Almost 2,500 ha of forest has been cleared on these plantations in 2018. The nearest mill to both plantations is PT Ketapang Agro Lestari, owned by First Resources. It is unknown which companies are buying from Sulaidy’s plantations, since First Resources reportedly confirmed that it does not accept palm oil from BBL.

The third biggest deforester of 2018 is the Bewani Oil Palm Plantation (BOPPL) in Vanimo, Papua New Guinea. Nine members of the Malaysian Tee family own the plantation. The Tee family, whose activity was highlighted in CRR’s report published on June 21, 2018 on shadow companies, has majority and minority ownership in groups of companies known as the Prosper Group, which includes the Bursa Malaysia-listed Far East Holdings Bhd. Members of the Tee family are the majority owners of four palm oil mills and the minority owners of another four mills. These mills contribute to the supply chains of numerous companies with NDPE policies, including Wilmar, Mewah, IOI, Musim Mas, Bunge, Sime Darby, ADM, AAK, Cargill, Colgate Palmolive, PepsiCo, Reckitt Benckiser, General Mills, Mondelez, P&G, Nestlé, Olam, Mars and Unilever. 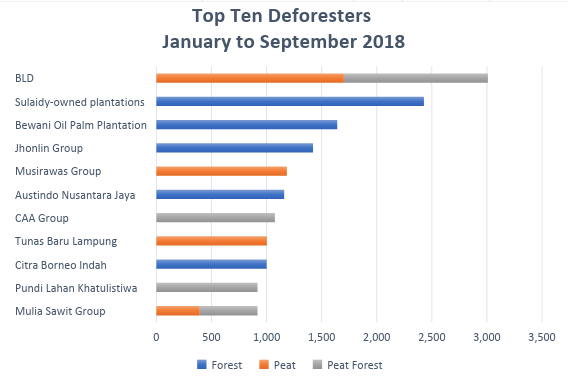 CAA Group, Citra Borneo Indah and Tunas Baru Lampung are three other notable deforesters. All three have recently been covered in CRR reports due to deforestation on their plantations or the methods they have used to publicly disassociate themselves from plantations linked to deforestation. As the reports highlight, these companies remain part of the supply chains of businesses with NDPE policies.

The main NDPE customers of Mulia Sawit Group, the company that rounds out the top 10, are Mars, Bunge, Cargill, Musim Mas, PZ Cussons and Pepsico. With deforestation persisting, increasing transparency about the main actors may prompt investors in the fast-moving consumer goods (FMCG) industry to take action to put pressure on companies to not source supply from those that produce unsustainable palm oil.

4 Responses to The Chain: Malaysian BLD Tops List of Major Deforesters in 2018

« Carrefour’s ‘Act for Food’ Initiative to Bolster Zero-Deforestation Policy The Chain: Deforestation in the Amazon Hits an 11-Year High as Demand for Brazilian Soy Increases »