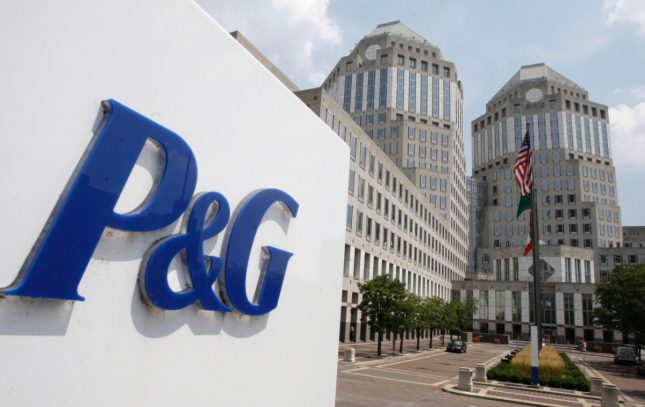 In an unprecedented move, BlackRock voted in favor of a shareholder resolution requesting an assessment report to identify further opportunities to combat deforestation and degradation of intact forests in Proctor & Gamble (P&G) supply chains. BlackRock, State Street, and Vanguard, the “Big Three” asset managers, have a combined USD 62 billion in P&G stakes (as of Q1 2020), and as such, have been under substantial pressure from activists and environmental organizations to support the resolution. More than 382,000 people signed a petition calling P&G to stop deforestation and intact forest degradation for toilet paper production. Moreover, 139 organizations sent a letter to P&G CEO David Taylor regarding the company’s role in logging in the Canadian boreal forest. Activists protested outside the P&G Cincinnati headquarters, and environmental organizations engaged P&G shareholders. Meanwhile, the P&G board recommended that investors vote against the proposal, expressing satisfaction with existing deforestation policies.

After the resolution passed by 67 percent, BlackRock released a statement with its rationale for supporting the proposal: “As a long-term investor, the reputational and operational risks faced by companies being implicated in deforestation allegations is concerning to us.” BlackRock’s statement also highlighted an opportunity for P&G to further align its responsible forestry disclosures with the Task Force on Climate-Related Financial Disclosures (TCFD) framework and the Sustainability Accounting Standards Board (SASB) standards. BlackRock’s vocal support of a deforestation-related resolution on financial grounds may represent a willingness to lead large U.S. asset managers in recognizing the financial materiality of deforestation risk in company engagement efforts. Chain Reaction Research reached out to State Street and Vanguard with an inquiry into how they voted, but both declined to comment.

Green Century Capital Management submitted a shareholder resolution requesting that P&G “issue a report assessing if and how it could increase the scale, pace, and rigor of its efforts to eliminate deforestation and the degradation of intact forests in its supply chains.” The resolution cited a Chain Reaction Research report that estimated approximately USD 41 billion in P&G risk related to reputational losses as a result of deforestation linkages. The CRR report also highlighted USD 24 billion in market risk that P&G could face if access to EU customers, many of which have zero-deforestation commitments, is restricted. Finally, financing risk was valued at USD 1.5 billion to account for potential credit risk impacts.

P&G has existing policies and goals for mitigating deforestation in pulp and palm oil supply chains, but the timeline to completion is longer than originally committed, and the coverage is not complete. While P&G Family Care currently reports that 100 percent of wood pulp is third-party certified, the company aims to source 75 percent of wood pulp from Forest Stewardship Council (FSC) certified suppliers by 2025. P&G has also committed to invest USD 20 million in sustainable forestry by 2025. As a Roundtable on Sustainable Palm Oil (RSPO) member, P&G currently sources 60 percent of palm derived materials from RSPO-certified suppliers, with a goal of reaching 100 percent in 2022. In the meantime, P&G updates of its mill list only annually, has no grievance process or list, and follows no TCFD or independent auditing process of its palm oil deforestation risk. P&G continues to be linked to deforestation in Southeast Asian palm supply chains and in Canadian boreal pulp supply chains. The passage of the shareholder resolution may identify opportunities to accelerate efforts to combat deforestation in these regions.

Friends of the Earth recently released a report showing that BlackRock, State Street, and Vanguard have either abstained or voted against all 16 shareholder resolutions related to mitigating deforestation risk in consumer goods companies since 2012 (Figure 1). This trend is notable given that the Consumer Goods Forum (CGF), made up of 400 large global consumer goods retailers, manufacturers and service providers, did not achieve its 2010 commitment of reaching zero net deforestation in key commodity sectors within member supply chains by 2020. The below voting records do not appear to reflect the communicated commitments of member companies. 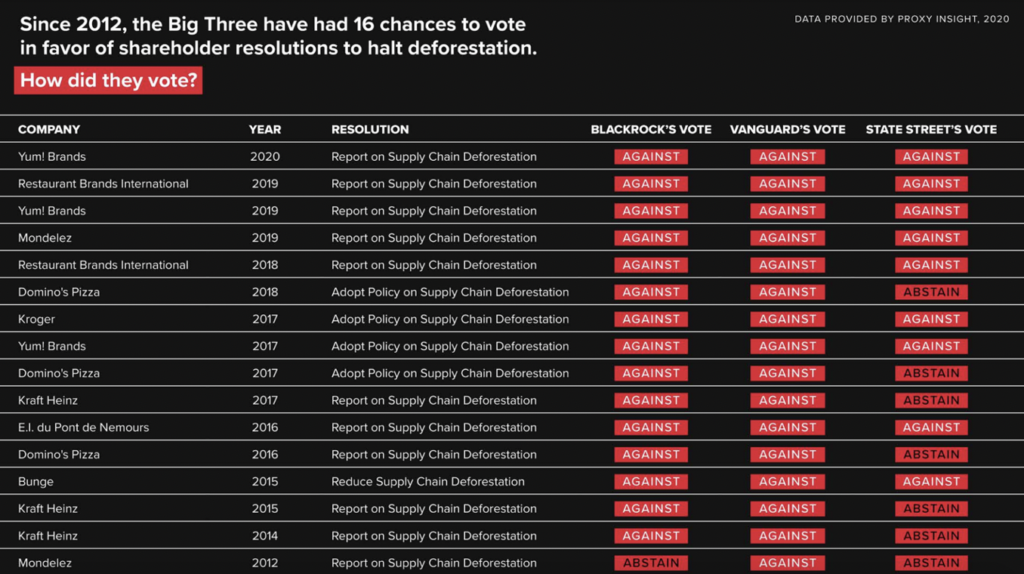 Source: Friends of the Earth and Proxy Insight 2020

With USD 250 billion, USD 157 billion, and USD 291 billion invested by BlackRock, State Street, and Vanguard respectively in 121 CGF members, the Big Three play a significant role in shaping deforestation policy and achieving commitments. Collectively, they rank in the top three of all shareholders for 67 CGF companies. In September 2020, the CGF announced a new initiative: the Forest Positive Coalition of Action. The coalition, made up of 17 of the largest consumer goods brands, including P&G, intends to use its “collective reach and knowledge, global networks and resources, to engage and collaborate with producers, suppliers and traders, as well as governments and civil society, to advocate for forest positive solutions.” One key goal is to regularly report on progress to achieve transparency, which calls into question the P&G board’s recommendation to vote against the deforestation reporting resolution. However, the resolution’s passage and BlackRock’s supporting vote may be a signal for what is to come in the second phase of CGF deforestation commitments.

« The Chain: Soy Traders in the Brazilian Cerrado Under Pressure as Fires Continue to Burn in the Vicinity of Silos The Chain: NGO Warns Banks, Investment Firms on Continued Financing of Indofood »