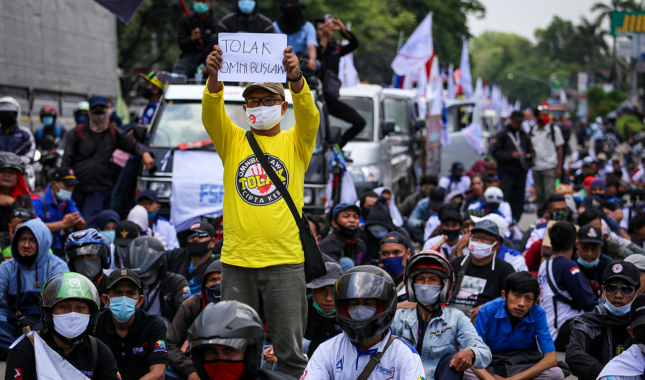 On October 5, 2020, the Indonesian House of Representatives and executive branch passed a controversial omnibus law. Intended to foster economic investment, the law has generated protests within Indonesia and international condemnation. Concern has focused on the weakening of environmental and labor standards. The omnibus law, which amends 79 existing laws and removes thousands of regulations governing the environment and labor rights, was proposed after almost 20 reform packages launched between 2015 and 2019 failed to pass. The law was developed without proper public consultations and, reportedly, in close collaboration with mining corporations.

The law could have widespread environmental ramifications. It removes a stipulation that each province in Indonesia has to maintain 30 percent forest cover, makes it easier for exploitative businesses to operate in protected forest areas, and simplifies procedures to turn a piece of land from forest to non-forest area. Additional concerns focus on amendments made to the environmental and social impact assessment (AMDAL) process. Currently, any business planning to develop land must conduct an AMDAL, which can be appealed by those living in the vicinity of the development site. But the omnibus law stipulates that only businesses that “have important effects on the environment, social, economic and culture” will require an AMDAL. It also states that environmental experts will not be involved in AMDALs and AMDAL assessment committees have been revoked. Companies operating without environmental impact assessments or satisfactory waste management procedures will face simple administrative sanctions. Previously, they were subject to criminal and civil charges.

The law also reduces employee rights with regards to severance payments, relaxes outsourcing guidelines, and removes requirements that businesses adhere to regional minimum wage laws. Experts warn that the law will put indigenous peoples’ access to forests at risk and impede efforts to hold companies accountable for forest fires since it allows the responsibility for fires to be shifted to smallholders.

The law’s passage has prompted widespread protests in Indonesia, which have led to the arrests of 6,000 people for public order offenses. The protests have also brought together disparate groups, including trade unions, environmental campaigners, and Islamic groups. The Confederation of Indonesian Worker Unions and Nahdlatul Ulama, Indonesia’s largest Muslim group, have announced that they will challenge the law in Indonesia’s constitutional court.

The law’s passage has also led to 35 global investors representing USD 4.1 trillion sending an open letter to the government of Indonesia, highlighting environmental concerns and stating that the weakening of environmental regulations does not incentivize new investment. The investors wrote “efforts to stimulate foreign investment by weakening regulations, such as easing restrictions on clearing land in palm oil concessions, are counterintuitive in light of investors’ growing desire for environmental protections and rising international demand for responsible commodity production and regulation on imported deforestation.” As CRR previously has noted, the omnibus law puts Indonesia at odds with European lawmakers’ moves to strengthen environmental compliance in commodity supply chains.

Indonesia’s president Joko Widodo has defended the law and claimed opposition is fueled by incorrect reporting. While political and legal ramifications unfold, industries that may benefit from the law’s changes could come under greater scrutiny. In the palm oil sector, No Deforestation, No Peat, and No Exploitation (NDPE) policies have become the norm. They have been significant for going beyond national legislation and creating a recognized industry standard that remains consistent among different geographies and jurisdictions. The policies have also served as a buffer against government regulation changes. Companies with NDPE policies will face pressure to ensure that they are not undermined by the omnibus law and continue to exclude companies in violation of policies from NDPE supply chains. Any company taking advantage of weaker government restrictions could face market access risks and possible economic losses. As a result, their financiers could face reputation risk and a further increase in value and investment risk.

« The Chain: Spike in Fire Alerts Within Sourcing Regions of Top Brazilian Meatpackers Increases Investor Risk The Chain: Soy Traders in the Brazilian Cerrado Under Pressure as Fires Continue to Burn in the Vicinity of Silos »