As fire alerts increased sharply in Brazil this summer, investors in key Brazilian meatpackers are seeing their risks grow. Even though four-fifths of Brazilian beef is consumed domestically, Brazil still remains the largest beef exporter globally. Furthermore, the top three Brazilian meatpackers, JBS, Marfrig Global Foods, and Minerva, are responsible for over 60 percent of beef exports. According to a Chain Reaction Research (CRR) report, fire alerts within the buying zones for these three companies accounted for almost 50 percent of all fire alerts registered in Brazil in 2019. In the wake of the 522,528 fire alerts registered in their buying zones in 2019, allegations of deforestation links in indirect supply chains continue to surface in 2020. Fire alerts in the sourcing regions of major meatpackers have spiked almost across the board in 2020 thus far, with a 41 percent increase in overall alerts and a 102 percent increase in alerts in September. 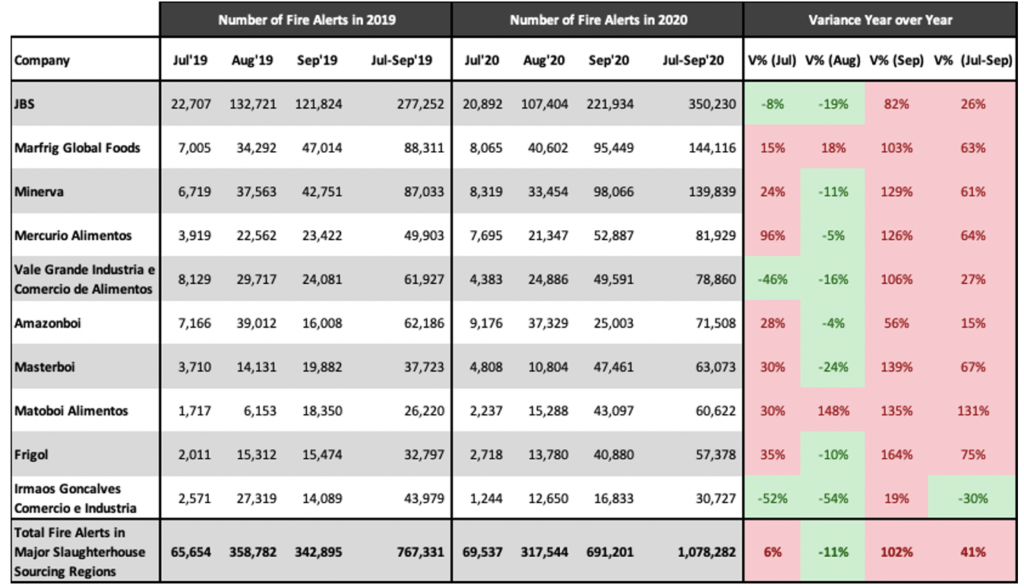 CRR analysis shows that JBS again has the highest potential exposure to fires in its supply chain, followed by Marfrig and Minerva. All three experienced a significant surge in fire alerts within buying zones in 2020: 26 percent for JBS; 63 percent for Marfrig; and 61 percent for Minerva. Meanwhile, Matoboi Alimentos, Frigol, and Masterboi experienced the highest year-over-year variances at 131 percent, 75 percent, and 67 percent respectively. Although still significantly lower than the top three in absolute terms, investors may still consider monitoring these groups over time as they do not face the same international pressure to make policy improvements compared to their larger competitors. Supply chain linkages to fires in the Amazon pose material financial risks to both meatpackers and their investors as access to international markets and reputation may be undermined.

CRR also analyzed satellite imagery of a subset of nearly 2,000 direct and indirect suppliers identified in a recent report on JBS. In September 2020, CRR detected 902 fire alerts within this sample of the company’s direct supply chain and 3,528 in its indirect supply chain. Figure 2 is a satellite image of a farm in São José do Xingu, Mato Grosso that supplies directly to JBS. Active fires were registered on the farm on September 15, 2020. As shown below, fires were present in both planted areas and native vegetation areas. 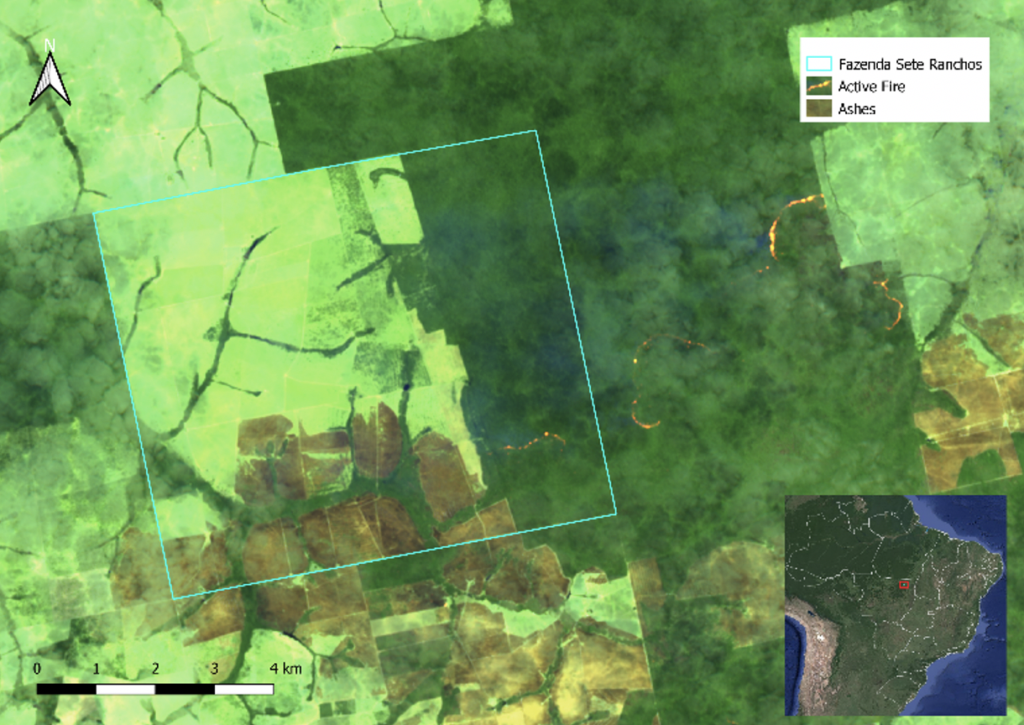 Fire alerts in context: Meatpackers’ response to fires and deforestation

Since the 2019 fire season, JBS, Marfrig, and Minerva have focused on process-oriented approaches to increasing transparency. Marfrig has taken the lead in its sustainability policy by announcing a goal of achieving full traceability in both direct and indirect supply chains by 2025 in the Amazon biome and by 2030 in the Cerrado. However, the company has received criticism due to the long timeframe established as Amazon deforestation and fires continue to surge. Marfrig also made a statement by hiring Marcelo Furtado, former director of Greenpeace, to its sustainability committee in June 2020. The company aims to work with the Brazilian government and financiers to create financial incentives for smallholders to conserve primary forests and support blocked farms in implementing sustainable practices.

Minerva may be under particular pressure to establish strong policies against deforestation and fires because its rapid growth across Latin America was driven by a 2013 USD 85 million injection by the International Finance Corporation (IFC) on the condition that expansion adheres to specific environmental and social standards. Despite inking a plan with the IFC on increasing traceability of supply chains, Minerva’s head of sustainability later communicated that Minerva “did some tests with properties in Rondônia [state], but unfortunately it wasn’t financially viable to completely track the animals and to scale the method.” Multiple cases of alleged “cattle laundering” involving an embargoed farm and national park land have already been identified by NGOs in 2020, following a 2019 Federal Prosecutor’s Office audit report showing gaps in legal documentation within Minerva’s supply chain. In an upcoming report, CRR will conduct deeper analyses on Marfrig and Minerva’s sustainability and financial risks.

JBS, Brazil’s largest meatpacker, has been the subject of significant negative press surrounding allegations of direct involvement of JBS employees in “cattle laundering.” In a recent CRR report, estimates of JBS’ deforestation footprint since 2008 ranged from 20,269 hectares (ha) to 200,000 ha in direct supply chains and from 56,421 ha to 1.5 million ha in indirect supply chains. The financial risks of JBS’ involvement in deforestation during COVID-19 were estimated at up to 26 percent of EBITDA and risked materializing in 2019 when the company’s second largest investor, BNDESPar, communicated its intention to divest half of its shareholdings. In response to allegations of deforestation links, JBS recently announced a four pillared strategy to increase the sustainability of JBS value chains and contribute to conservation, socioeconomic development, and science and technology investment in the Amazon biome.

Through the JBS Green Platform, the company aims to eventually trace its direct and indirect suppliers using satellite monitoring and blockchain technology. In the plan, direct suppliers have until the end of 2025 to authorize the inclusion of transport documents from all of their suppliers into the Green Platform. While transparency of indirect suppliers is essential to curbing deforestation in the Amazon, JBS is likely to face criticism for the timeline of implementation, especially since the company first enacted its zero-deforestation policy in 2009. As a part of accomplishing the four pillars discussed in the September 24 announcement, JBS also established a fund for the Amazon with a 250 million Brazilian real (USD 44.7 million) JBS investment over five years and one-to-one matching for donations up to 500 million Brazilian Real (USD 89.4 million). The company did not mention conservation and monitoring efforts in the Cerrado region.

For Brazil’s major meatpackers, recent transparency initiatives represent signaling for future action but come with long timelines and are unlikely to enact change in the near term. In fact, considering the combined 40 percent increase in fire alerts in the sourcing regions of these three meatpackers, it appears as though the situation is currently worsening as the window for mitigating the worst impacts of climate change is closing.