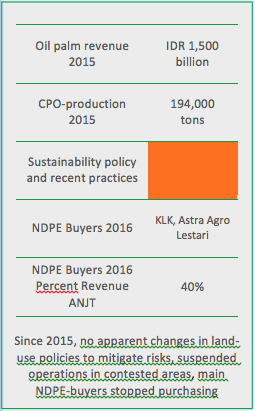 ANJT does not have a public NDPE policy. It is committed to preserving High Conservation Value areas and avoidance of peatlands. The company does not support the High Carbon Stock (HCS) approach. It has not made public any policy with regard to Free, Prior and Informed Consent and complying with the United Nations Guiding Principles on Business and Human Rights or the ILO core conventions.

The company is a member of the RSPO. Its mills and supply bases in North Sumatra and Belitung are RSPO certified. ANJT aims to achieve 100 percent RSPO certification for its own operations by 2022. Over the years, the company has been submitting several New Planting proposals to the RSPO and the public. However, the company has also admitted that it has been clearing based on preliminary HCV assessments.

As shown below in Figure 9, ANJT’s developments in West Papua province have raised serious concerns by traders/processors with NDPE policies. Between 2014 and March 2015 ANJT has cleared approximately 8,000 ha of highly forested landscapes in Sorong, the Bird’s Head Peninsula. The company had not identified and conserved High Carbon Stock forest areas. As of Q2 2015, both GAR and Wilmar suspended CPO purchases from ANJT because of this active forest clearance. In Q4 2015, Musim Mas followed suit. In October 2016 ANJT stated that it is currently reviewing its High Conservation Value area assessments for the concessions. Since March 2015 ANJT has (temporarily) halted the clearing in West Papua. In 2015 and July 2016 communities expressed their opposition to ANJT’s presence in the area. 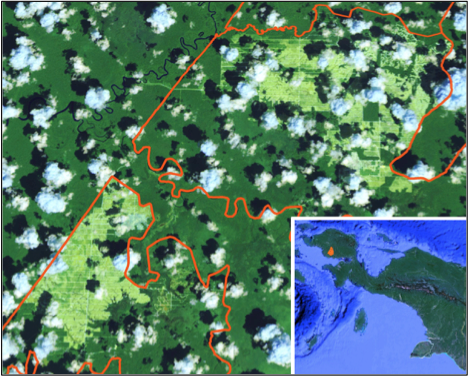